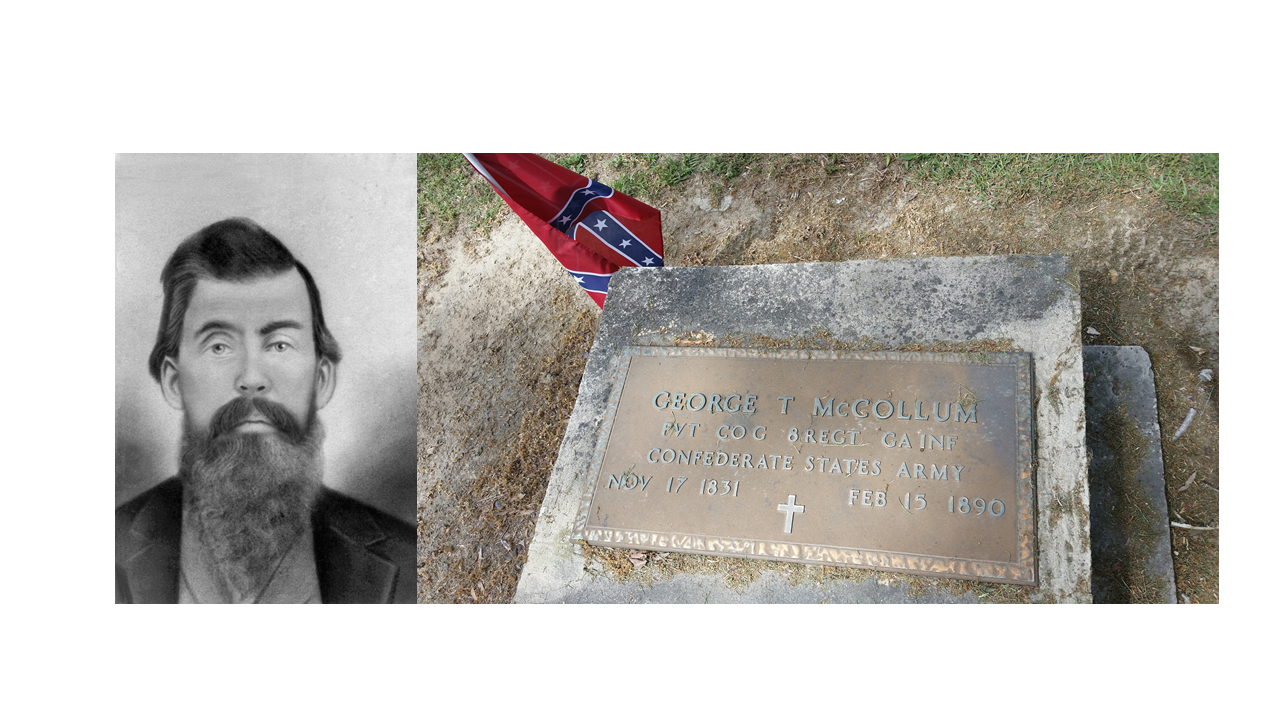 HOLLY POND – Have you ever walked through an old cemetery and wondered who was buried there? What did they look like? Were they married? Did they have children? Ever wonder what kind of person they were and what kind of mark they left behind? Well, one afternoon as I drove through Holly Pond, I noticed a grave right on the side of the road next to First Baptist Church of Holly Pond. It had a small Confederate flag stuck in the ground next to it. Who was this person and why is he buried all by himself in the grass next to the road? I just had to know, so I quickly pulled into the church parking lot to check it out.

As I approached the grave, I watched the small flag waving softly in the wind. I picked a few leaves and twigs from the Civil War marker and began to read.

I took a few pictures of Pvt. George T. McCollum’s grave. I said a little prayer for him and just stood there with him for a few minutes. When I got back to my car, I watched the old grave in my rearview mirror as I pulled out of the church parking lot and drove away. Private McCollum, who are you? I thought to myself as I drove home.

Thanks to the internet and genealogy websites like Ancestry.com, Findagrave.com and Rootsweb.com, you can find nearly everything you want to know about your ancestors and people like Pvt. McCollum. Once I got to the house, I hopped online and began my search. Before long, he became more than an old gravesite on the side of the road in Holly Pond; he became someone I “knew.”

George Thomas McCollum was born on November 17, 1831 to James and Elizabeth (Arnold) McCollum in South Carolina.  He married the lovely Miss Phoebe Ann Reagan on December 18, 1856. They had five children in 13 years. Their names were Alice Cecelia, Mary Elizabeth, Georgia Anne, Sarah Ella and little James, who passed away when he was less than a year old.

On August 4, 1863 McCollum enlisted in Company G, Georgia 8th Infantry Regiment in Conyers, Georgia. This regiment was known as the “Pulaski Volunteers” and was organized late into the Civil War. The “Fighting 8th” participated in many different battles and finally surrendered on April 9, 1865 at Appomattox.

Sometime after the Civil War, George, Phoebe and the girls moved from Georgia to Holly Pond and the little family soon became prominent citizens. At the age of 58, George passed away. The day was February 15, 1890. He was buried across the street from his home, by himself. His grave is now part of the front lawn of First Baptist Church of Holly Pond. The church is located on the north side of Highway 278 at the intersection of County Road 1669 (Shaw Road).

I know there was way more to George T. McCollum, the man, than I will ever know. Sometimes I wonder why our paths crossed that day. I’m glad I had the curiosity to go and “hunt” him down. I felt he had a story to tell and I like to think I, in a small way, helped him. If you are ever in Holly Pond, why not stop by and visit his grave?