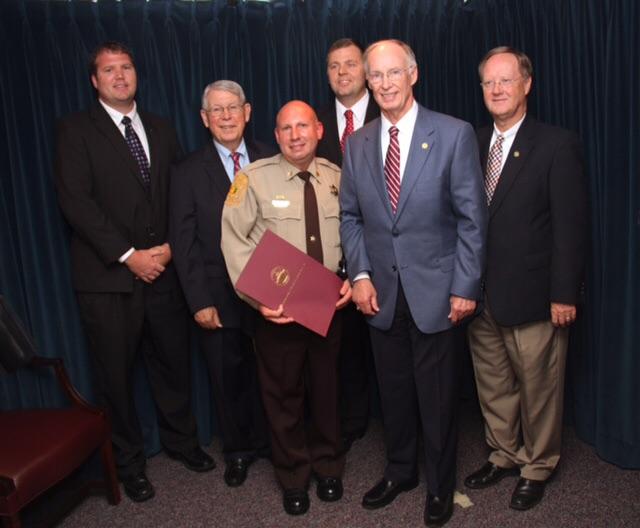 MONTGOMERY – Cullman County Sheriff's Deputy Stephen Thomas was honored today at the 2016 Alabama Legislative Medal of Honor for Law Enforcement event during a joint session of the Alabama Legislature at the Alabama State House, where he was given a commendation and resolution for his actions on December 27, 2014. Cullman County Sheriff Matt Gentry attended the event with Thomas. Thomas was a nominee for the Legislative Medal of Honor for Law Enforcement.

On December 27, 2014, Thomas was dispatched to a call in the Holly Pond community to assist local emergency medical services and rapid responders with a male individual who was exhibiting signs of mental instability and threatening to harm others in the area.

As the individual's anger escalated, he exited the residence and proceeded toward Thomas and Deputy Ryan Fortenberry in a threatening manner,  brandishing a samurai sword. As the individual continued to approach the deputies while yelling, behaving in an irrational manner and intending to do physical harm to others with the sword, Thomas and Fortenberry remained calm and asked the individual to stop and drop the weapon.

"Although we live in a great community, a Sheriff's Deputy's job is never routine," said Gentry. "We are fortunate to have great Deputies here at the Cullman County Sheriff's Office."

Officer Joey Brown of the Orange Beach Police Department was awarded the 2016 Legislative Medal of Honor for Law Enforcement.