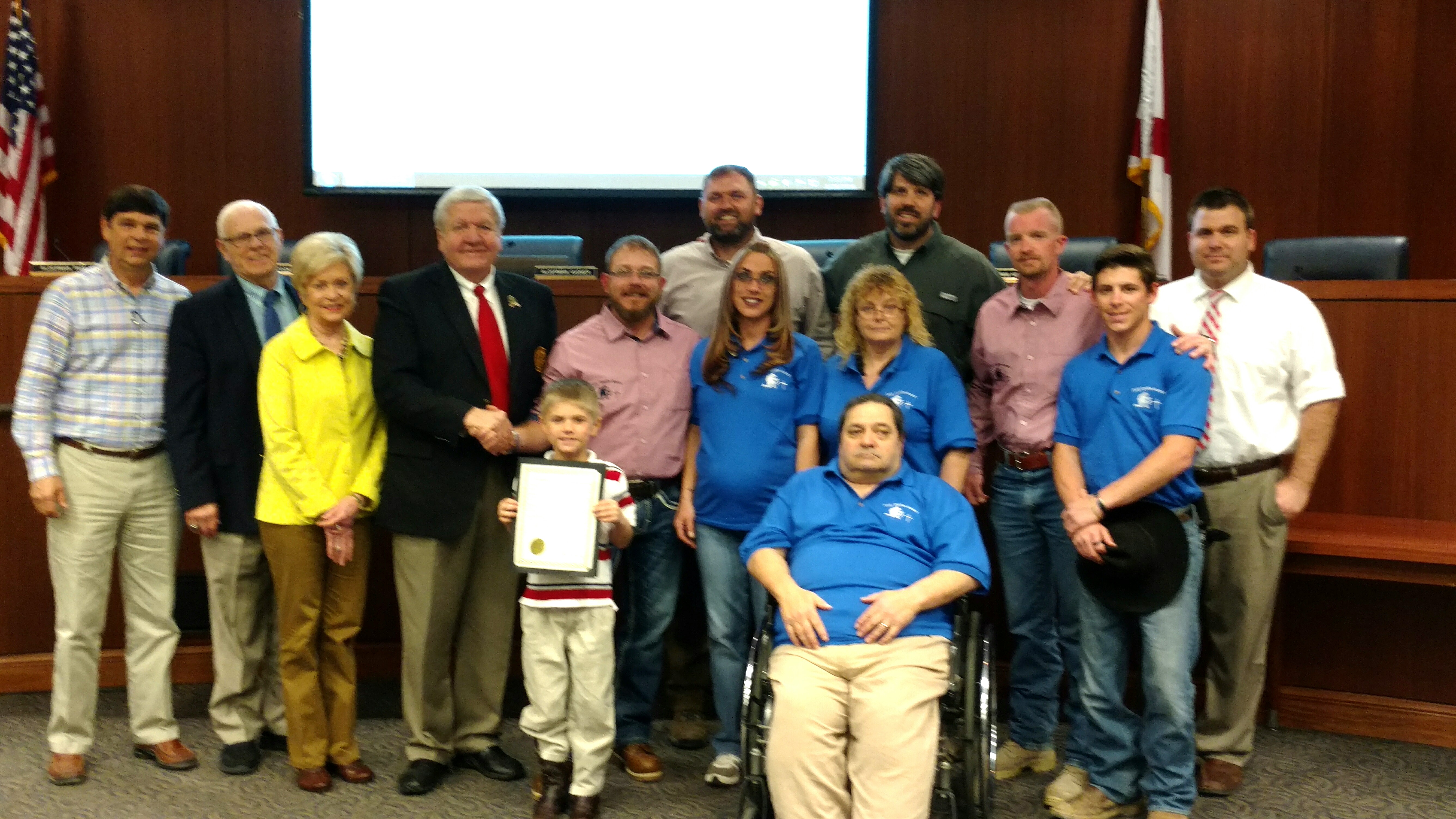 CULLMAN – The Cullman City Council held a regularly scheduled meeting on Monday night. Two of the biggest items on the agenda were the recognition of local nonprofit Saving Forgotten Warriors and the renaming of the Cullman Municipal Golf Course.

Mayor Max A. Townson presented a Certificate of Commendation to U.S. Marine Sgt. Jeremy Hogan and his nonprofit organization Saving Forgotten Warriors for “raising awareness of the needs of our local veterans” and their hard work addressing those needs by “coordinating the voluntary donation of time, services, materials and other necessary items.”

Hogan founded Saving Forgotten Warriors in January of this year after meeting a community veteran who was in dire need of help. Every Saturday since then, SFW has been helping U.S. Marine Cpl. Kenneth Beasley clean and repair his property and home. They have also gotten him the medical help he so desperately needed. See more of Beasley’s story at http://cullmansense.com/articles/2016/02/03/saving-cpl-kenneth-beasley.

Hogan shared his gratitude after receiving the commendation, “What we’ve been able to do in eight weeks is amazing. It’s a godsend. We’ve helped over eight veterans so far in eight weeks, and I love Cullman. Everyone in this community is amazing. Thank y’all so much from bottom of my heart, and if there’s any veterans out there that need any help, send them to us.”

Cullman City Parks and Recreation Department Executive Director Nathan Anderson presented information on the new name and logo design for the Cullman Municipal Golf Course, which will now be known as Cross Creek Golf Course. Anderson shared, “If you’re not from the area and you don’t know the course, a lot of time, if you’re a golfer, you’ll pass over the municipal course because there’s a stigma associated with it being a municipal course. Our course doesn’t play like a municipal course. Ours is beautiful.”

Councilman Clint Hollingsworth echoed the sentiment, saying, “A lot of folks in this county and city learned to play golf and fell in love with golf on that course and I think it’s crucial to preserve the future of it.”

Townson requested that the City Sign Department work with Anderson to make new signage for the golf course with a roughly estimated cost of $100-$200, which the council approved.

A permit was approved for the June 11 MOPAR Car Show at Depot Park which will benefit Secret Meals for Hungry Kids, a nonprofit organization that aims to provide weekend meals for needy children in the community. The Farm Y’all Festival permit was approved, and the event, celebrating the Cullman County farming community, will be held on August 27 at Festhalle Marketplatz. Lastly, a permit was approved for the 2nd Fridays events during June, July, August and September when the COC will partner with CP&R to highlight shopping, music and fellowship in historic downtown Cullman.

Due to the cost of additional chemicals required as a result of the Christmas Day flooding, the Wastewater Treatment Plant requested an amendment to their chemical budget in the amount of $225,000 for the period of January 2016 – September 2016. WWTP Superintendent Jeff Adams also requested the approval of the purchase of a drive assembly for a water clarifier which, at $32,500, is in the department’s budget. Both of the requests were approved.

Additional business included a request by Waid Harbison of CP&R to hold the 2016 Strawberry Festival May 6-7.

A request to purchase a vapor blast machine, which is an “eco-friendly” cleaner, for $58,920 was approved.

A tax abatement was issued to General Dynamics Global Imaging Technologies, Inc. for $2.7 million for “a lot of high tech jobs” per Councilman Johnny Cook. No school taxes will be abated.

In another request, city resident Deanie Penney asked the council to reconsider its process for tree removal on city property in right-of-ways. Two trees were cut down across the street from Penney’s home on Ninth Street Southeast, and Penney stated that she wished she had been notified beforehand so that she would have had an opportunity to make her feelings known about their removal. Council President Garlan Gudger reassured Penney that her request would be considered by the council.

Resolution No. 2016-62, awarding the installation of a traffic light at the intersection of First Avenue Southeast and Fourth Street Southeast to the lowest bidder, Stone & Sons Electrical Contractors, Inc. in the amount of $80,300, was approved.

The Cullman City Council meets on the second and fourth Monday of each month at 7 p.m. and the public is encouraged to attend. The next meeting will be held on April 11.