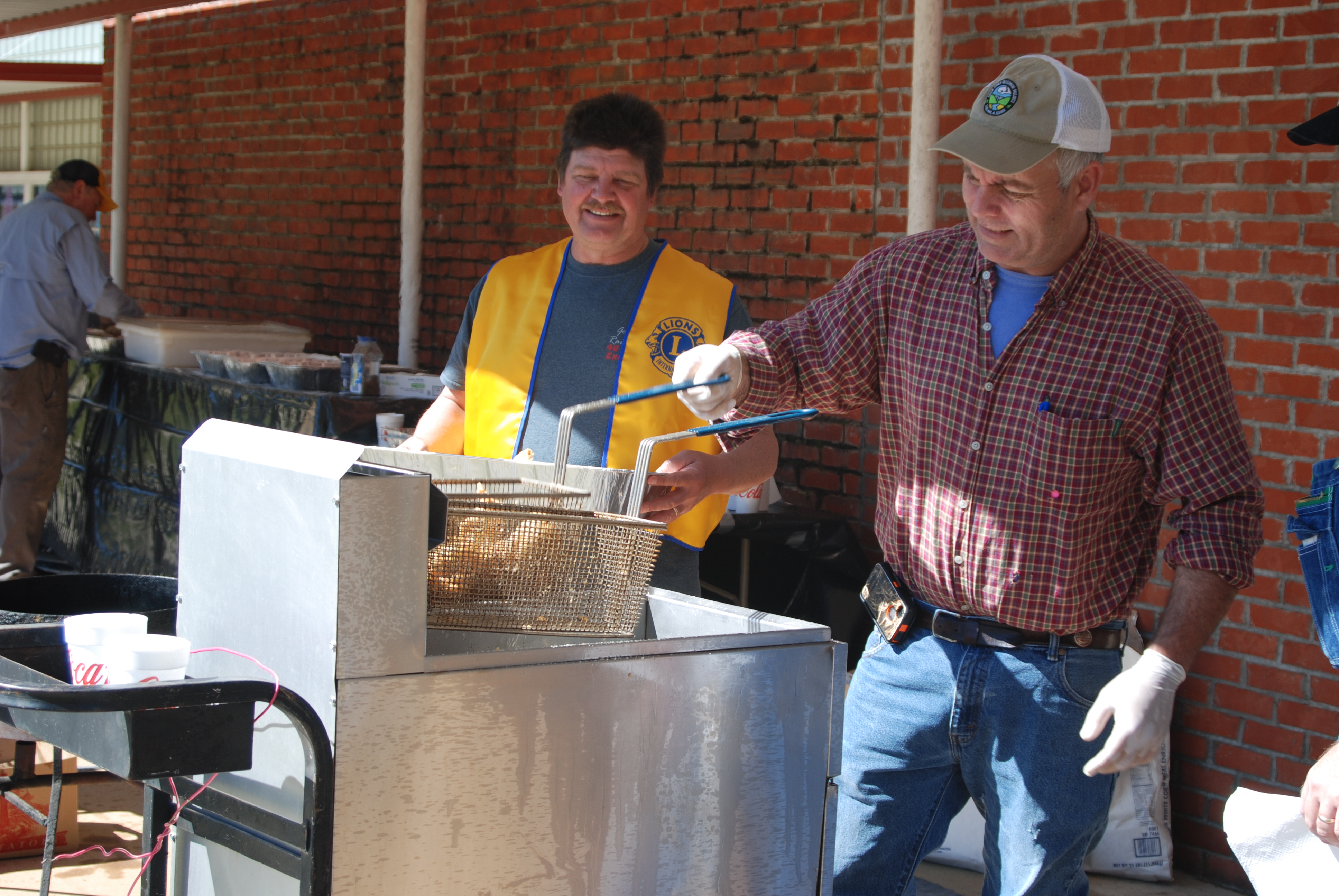 The Lions Club does lots of things, but everything we do to raise money here goes to the betterment of the community. We’ve been doing the Fish & Ham Dinner for well over 40 years now.”
Frank Odell, Lions Club member

CULLMAN – On Saturday, March 5, the Cullman Lions Club held their Annual Fish & Ham Dinner fundraiser in the Cullman Middle School cafeteria. People from all over Cullman County came out and enjoyed a delicious meal and visit with local Lions Club members.

“The Lions Club does lots of things, but everything we do to raise money here goes to the betterment of the community,” said Frank Odell, Lions Club member. “We’ve been doing the Fish & Ham Dinner for well over 40 years now. We have always held it in the Cullman Middle School cafeteria.

“We serve Mississippi catfish that we’ve breaded up ourselves out back,” he said while pointing towards the cafeteria door. “We bread the fish, cook it and bring it in the back door,” he grinned. “We make our own slaw and our own hushpuppies. We even make our own tartar sauce, too. It works out really well because most of the Lions have done the same thing for nearly forty-something years.

“Our Lions Club members work really well together,” he continued. “We get along good and have a lot of fun. Today we’ve done everything by breaking down into committees. For example, Mr. Fred Osborn is the Chair of the Drink Committee, and has been for 45 years. Every year he gets with Coca-Cola and makes sure the product gets here. At the dinner, he takes care of the drinks for us.

“Jerry and Richard,” he pointed at two Lions Club members, “are over the Table Committee. I never realized it until I sat down and ate a meal, but they stay busy cleaning off the tables while they visit with everybody that came to eat. You see, this is a social hour for anyone who wants to come in and eat in,” he grinned.

“For take-out dinners we have Mr. Charlie Powell. He has been in charge of the drive-thru for 20 years. He and his crew use radios to tell the kitchen how many dinners they need for each car so the meals are packed up, delivered and everything keeps moving.”

The Lions Club is one of the world's largest service club organizations. Their members do whatever is needed to help their local communities. The friendly Lions are a talkative bunch and really enjoy getting to know their neighbors. From children who need eyeglasses to seniors who don’t have enough to eat, the Lions are quick to jump in help those in need.

“The Fish & Ham Dinner goes back to about 1971, but it didn’t start out with catfish. I don’t remember exactly what we originally served, but some people didn’t like it, so we changed the menu,” chuckled Jim Grier, longtime Lions Club member.

“The money we make here today will go to fund community projects,” said Jerry Bonner, Lions Club treasurer. “The Fish & Ham Dinner and the Cullman County Fair are our main fundraisers, but during Rock the South we run a couple of the parking lots, which has become a pretty good project. All the money we get from there goes to Cullman Caring for Kids.”

On average, the Fish & Ham Dinners serve around 1,800 people each year and the Lions will profit $10,000 to $12,000, which is money that will go directly to the betterment of the community. The 2016 Fish & Ham Dinner is now a thing of the past, but they Lions will continue to host the event, like clockwork, each year.

For more information about the Lions Club, visit www.cullmanlions.com.