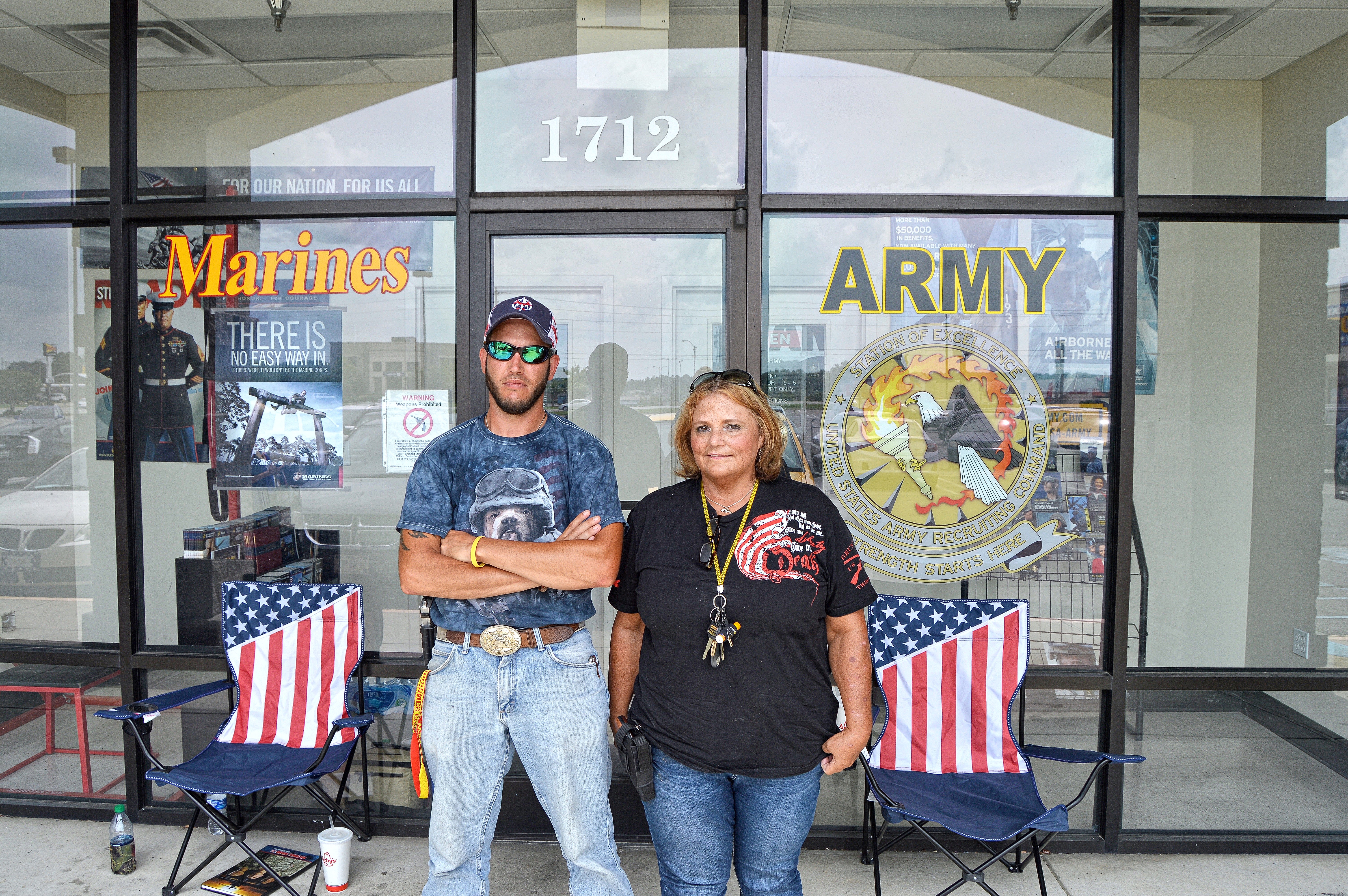 We've got to get people back to loving our country again.”
Sheila Huff, Volunteer

CULLMAN – Just off Second Avenue at the Armed Forces Career Center in Cullman, Joey Miller and Sheila Huff are on guard. After learning of the shooting at a military recruiting center in Chattanooga, the duo knew they had to take action.

Miller is a former United States Marine and current member of Oath Keepers while Huff is a member of the Sons of Liberty.

The two volunteers are guarding the Center, just as many others are across the nation.

“Just because our service contract’s up doesn’t mean we’re not a Marine and in the military,” Miller said. “This is our family. If they can’t protect themselves, someone’s got to do it.”

Huff interjected, “The problem is if someone doesn’t [protect those who cannot protect themselves] then what happened in Chattanooga is going to happen again.”

Along with guarding the Center, Huff has created a Change.org petition to Governor Bentley that asks him to allow the recruiters to “at least have a carry-on” side-arm weapon. Miller and a friend intend on raising money on GoFundMe to have bulletproof glass installed at the Center.

Miller and Huff are not alone in their endeavor. Several of Miller's military comrades are replicating what he is doing in California and Arizona. Huff said Huntsville residents are doing the same.

Although members are linked through social media and other organizations, the volunteer movement was not an organized nationwide operation. Rather, according to Miller and Huff, it consists of individuals groups “who’ve had enough”.

Both Miller and Huff carry handguns on their hips while on guard. They started their service on Monday, July 21 and do not take lunch breaks. However, some of the surrounding businesses have brought them food and refreshments, as well as a "thank you" for keeping the area safe.

“I’ve talked to several veterans and we’ll do day shifts. So there will always be at least two-to-three former Marines or Army men here. I even talked to Matt Gentry. We have some active police officers who will help when they’re off duty,” Miller said.

Miller explained how his presence has affected the people and businesses in the shopping center.

“Yesterday these two offices [the two businesses located on either side of the Armed Forces Career Center] came up to me and said they had been scared to be here until yesterday. They said they feel like they’re back to normal since we’ve been here.”

Although the temperature was above 95 degrees, Miller and Huff seemed glad to be standing in front of the Armed Forces Career Center.

“We've got to get people back to loving our country again,” Huff said.

“That’s the problem. You've got to get out there. You can’t just talk about it. If we can do that, maybe it’ll change.”