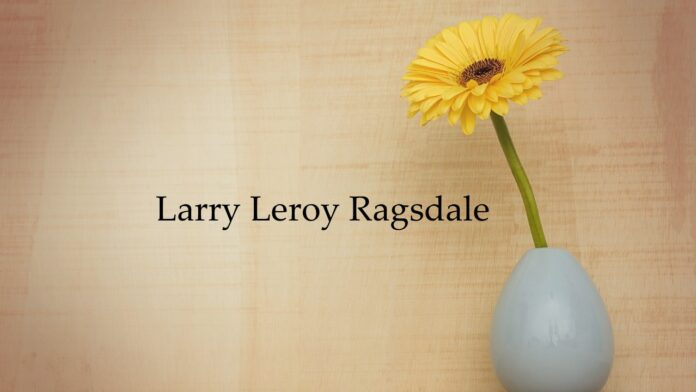 Larry Leroy Ragsdale of Cullman passed away on Sunday, Oct. 2, at Cullman Regional Medical Center of heart failure following a long period of illness and pain.  He was born the second of three sons to Melda Ponder Ragsdale and Carlton Cornell Ragsdale on March 21, 1941, in Cullman, Alabama.  He was preceded in death by his parents and his younger brother Ronnie Ragsdale.

He attended East Elementary School and Cullman High School where he played varsity football for one year, receiving a busted nose from his old pal Eddie Peinhardt (quite by accident!).  His lifelong high school friends have remained a vital part of his life and the tales of their lives back then certainly are fun-filled and entertaining.  During his high school years, he worked at the old A&P grocery store as a bag boy, along with many of his other friends.

He attended Florence State College, now University, for a year and a half, hitchhiking home with other Cullman friends each weekend. Finding college was not for him, he joined the National Guard where he served for four years as Supply Sergeant, under new friends Gen. Jim Berry and Shorty (Harold) Nix. The tales from those days, especially the summer camp escapades along the Gulf Coast, have been told many countless times, maybe with exaggeration and maybe not?

Offered a job at the Cullman Power Board in 1963, Larry started out manually digging post holes for power poles, as the crew dropped him off at his job site at 7 a.m. and showed up at 4 p.m. for the ‘end’ of his workday.  Moving up to Meter Reader (Manager Jim Call asked him if he wanted to transfer to the job of head meter reader, only failing to mention that he was the ONLY meter reader).  Every month, he read every single meter in the city of Cullman.  (Lotta walking and a lotta running from dogs!)

After spending time traversing Cullman, he was offered the job of managing the Power Board Warehouse, a position he held until his retirement in 2004.  Old friend Johnny Fricke, the Board’s accountant, showed up every year for the annual inventory.  Larry spent a month counting EVERY item in the warehouse and during his management years the inventories always ended up in the black.  ‘Course, Larry always had to pull Johnny’s leg about finding snakes in the pile of power poles so Johnny would accept Larry’s pole count as correct, staying far away from that part of the warehouse yard!  Larry spent 41 years in his Power Board career before his retirement, working numerous weather storms, weekend standbys with dear friend Jack Seymore and sharing office space with Andrew Hoenig along the way. Even after his retirement, the warehouse crew could call and ask him the number of certain parts needed for work orders, and he could always rattle it off in no time.  A dedicated fellow worker, he often rolled up the car/truck windows on rainy days when the crew was out on a job, and he never took any offered ‘goodies’ from salesmen who called on him for purchase orders.  Rather, he’d tell them ‘no,’ but say if you can do something for the whole crew, that would be fine.  Shrimp from Baldwin Pole and Piling and other incidentals showed up at the warehouse door from time to time.  Larry ended up his career as the ‘Father’ figure for his fellas.

During the late 1980’s and early 1990’s he was co-owner of Baseball Cards and Comics, a specialty shop located in Town Square Shopping Center.  Mr. Roy Drinkard, owner of the rental space, became an even greater friend over the course of the 7 years when the shop was open.  Both Larry and his wife Barbara, son Joe Ragsdale and John Richter, shop managers, made numerous friends over the years, friendships which stand to this day.  Hard to go into local stores and not meet someone from ‘the good ‘ol days’ of ‘Cards and Comics.’

Following retirement, his next career was for the benefit of his grandson Carlton, as he ran a local website and Facebook page, called ‘Cullman Life’.  Under the auspices of son Mike Ragsdale, of 30A fame, he went out each day into Cullman searching for events and pictures of life in the area.  Promoting local happenings, the website continued for 6 years with many followers.

His greatest jobs, though, included raising two wonderful sons, Mike and Joe Ragsdale, and he always said that being able to send them to college (Auburn and Alabama) was his utmost achievement.  Being industrious entrepreneurs, they both hired Larry as Vice-president of Marketing Director for Mike’s 30A brand, and for Joe’s Rock N Roll Sushi enterprise (no financial money involved!  Free gratis, I suppose! – got lots of t-shirts, hats, mugs, etc. from both companies!  Loved them and wore one of the t-shirts every day for the rest of his life!  He was the biggest supporter of both of his sons’ businesses!  Every time we’d go out, he’d stop at every table and tell folks about Mike, Sean Michael and Scott Davis’s AOL ‘Hecklers on Line’ website, handing out stickers and business cards.  Then when Mike founded his 30A business, again the same – EVERY TIME, EVERY WHERE!  THEN, along came Joe’s Rock N’ Roll Sushi business –once again the same!  Proud Daddy to be sure!

Larry is survived by his wife of 53 years, Barbara, whom he met when she went to work at the main office of the Cullman Power Board (Ruth Gasser, Barbara’s friend, got her the job, but Larry always said he didn’t hold grudges against her!) (AND all it took to win her heart was a cup of hot chocolate delivered to her in person on a cold, rainy night when Barbara was working in a ticket booth at the County Fair!).  Larry always supported her school, scout, garden club and church work (two churches:  Melda’s beloved First Christian Church, Disciples of Christ, where he was baptized, and Sacred Heart of Jesus, Barbara’s church home), taking an active part when needed (even struggling through Tennessee’s Cumberland Caverns caves, crawling on his stomach with Mickey McDowell and the Boy Scouts of Troop 321), teaching knots and going on campouts along the way. Survived also by sons: Michael and daughter-in-law Angela; Joseph and daughter-in-law Tanya; seven grandchildren:  Jayne (Sean) Hurley, Kelsey (Dan) Ragsdale-Glaser, Carlton Ragsdale, Holly Ragsdale, Evie Ragsdale, Jessie and Jerrie Sue Godbee; brother: George; cousins: Suzy Ponder Eidson, Joyce Ponder Cahoon and G. W. Ponder.

Numerous lifelong friends not previously mentioned include David McKoy and Bill Hendrix, and many others who meant the world to Larry and Barbara.

Graveside service will be on Tuesday, Oct. 4, at 11 at Sacred Heart of Jesus Catholic Cemetery, Rev. Robin Lambert officiating.

In lieu of any memorials, please take time today to reach out to an old friend and reconnect, share memories and do this in observance of Larry’s loving and giving spirit in this life.

“May the angels lead you into paradise.  May the martyrs come to welcome you and may they take you into the holy city, Jerusalem.  May the choirs of angels welcome you, and with Lazarus, who once was poor, may you have eternal rest.”  Rest in peace, dearest Larry:  husband, father, grandfather & friend.

You will be greatly missed!