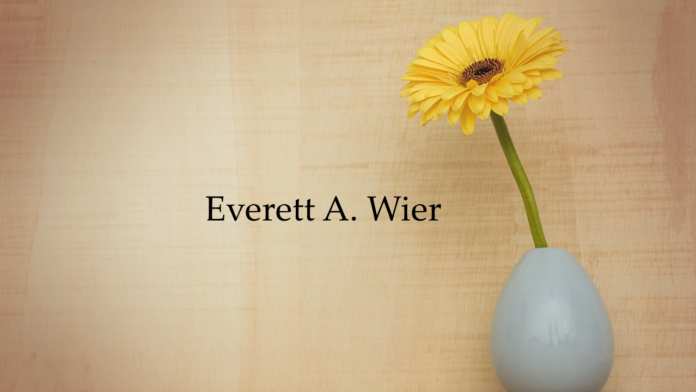 He was preceded in death by his parents; his five brothers: Albert, Allen, T.G., Thomas and Carl; his three sisters: Ernestine, Joyce and Barbara and by his loving wife of 51 years: Tommie.

Mr. Wier served in the military as a Platoon Sergeant and Tank Commander during the Korean War with Tank Co. 167th Infantry Regiment, the 31st Dixie Division from Talledega, Alabama. He also completed the Senior NCO course while stationed at Fort Jackson, South Carolina. He then worked at CSX Transportation and retired after 23 years of service. Mr. Wier and his wife, Tommie, married in 1963. Mr. Wier described Tommie as a very loving wife, mother and a great companion, faithfully devoted to her family and church.

Both were faithful members of First Baptist Church in Midfield, Alabama for 40 years where Mr. Wier served as a deacon. In 1996, they moved to Cullman, Alabama and became members of Lake Catoma Baptist Church where he has remained a faithful member for the last 26 years. Mr. Wier served on the East Cullman Baptist Association Disaster Relief team for 20 years. He was a member of the Master Gardeners, the Arbor Society and served on the Tree Commission in Cullman, Alabama. Mr. Wier generously supported many other organizations throughout the years.

Mr. Wier treated everyone he met with the utmost kindness and respect. As a Christian gentleman, he exemplified all that is good and showed immense compassion and generosity to others. Mr. Wier will be greatly missed as a father, by his family, his church family and many dear friends.

A celebration of life visitation for Everett will be held Friday, February 4, 2022 from 5:00 p.m. – 7:00 p.m. at Moss-Service Funeral Home. A visitation for Everett will occur Saturday, February 5, 2022 at Elmwood Chapel (800 Dennison Ave SW, Birmingham, AL 35211), one hour prior to a celebration of life funeral service at 11:00 a.m. A committal service will occur Saturday, February 5, 2022 at Highland Memorial Gardens in Bessemer, AL.