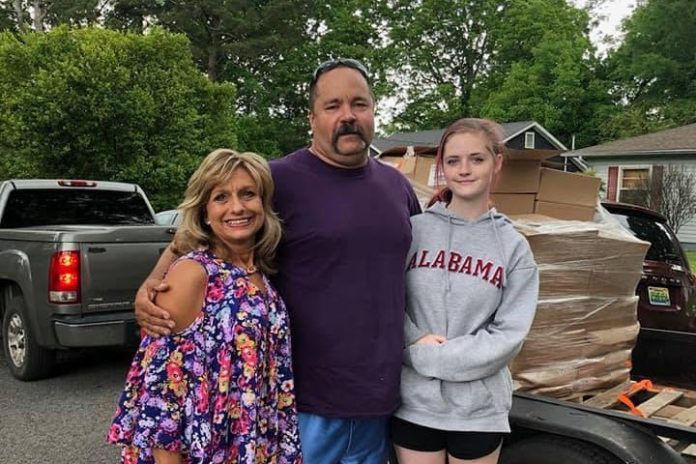 CULLMAN, Ala. – Cullman Fire Department Lieutenant Neville Franks has a most worthwhile pastime: for the last six years, he has been distributing food to families in need, mostly in Cullman and Blount counties, but not objecting to driving as far as Tennessee and even Georgia to make deliveries, often at his own expense. Now, in partnership with the North Alabama Agriplex in Cullman and veterans’ group Forever and Always Patriots in Walker County, along with Sonya Nail, Marc Thrailkill and Nancy Moore with volunteers from Restoring Women Outreach, he helps deliver approximately 1268 USDA food boxes per week to women’s shelters, group homes, The Link of Cullman County, Pilot Light Home and numerous individuals and households across the two-county area, serving 900-1,000 families per month, and occasionally more. When anything is left over, it goes to Cullman Caring for Kids.

Last year, Franks personally distributed 260,000 pounds in USDA food boxes and 30,000 pounds of fruits and vegetables. With the Walker County veterans’ group, a total of 1.7 million pounds of food was distributed between March and December 2020.

In addition to the food boxes, Franks and other volunteers visit farmers willing to share their produce and glean crops of watermelons, potatoes and sweet potatoes, apples, beans, blueberries, blackberries and more. He already has plans to visit the Gulf Coast this fall to get oranges and other items.

Said Franks, “If you have extra and you don’t have somebody that’s coming to get it, please; I have people that’ll come pick it. We’ll distribute it. Nothing goes to waste.”

Franks has even given items like already-sprouting potatoes to farmers for them to plant, on the agreement that they will share those crops with charities and families in need.

Franks sees a serious need across the region. In Blountsville, he said, “They line up for three city blocks when they know the food boxes are coming. It’s heart-wrenching, how many people need the food boxes.”

Why does he do it?

“I’m just passionate,” said Franks. “As a kid, we hit some really, really hard times, and if you’ve ever known what it’s like to be hungry . . . You know, I’m blessed. I’m a Lieutenant in the Cullman Fire Department. I’m blessed with a great job, I’m blessed with the opportunity to give back, and that’s why I do it.

“It’s hard to explain, but once you’ve been hungry, you never want to see anyone else hungry again. And I’m just blessed to be able to do it. I can’t explain it more than that.”

Franks did his charitable work quietly for years, trying not to draw attention to himself; in fact, it was Moore, who revealed him to The Tribune and convinced him to talk about his work, in hopes that the exposure might get the word out about offerings like the USDA food box program and help even more people in the long run.

Franks has encountered groups involved in food distribution who will only share food with certain people. For him, that is not the proper approach.

“I’m not a political person,” said Franks. “I hate politics in this. If somebody comes to me and they need food, they get it. If they call me and they need food, they get it. I don’t care what they look like, I don’t care about their politics. I don’t care if they’re driving around in a brand new Mercedes because, honestly, in the times we’re living in right now, there’s people that had jobs that don’t have them anymore. And we don’t know what their financial means are. Who am I to judge what they need and don’t need?

“I will help anybody at any time, anywhere. That’s my whole goal in life.”

Bigger plans in the works

Franks, who farms when not fighting fires, told The Tribune that a local farmer has offered the use of 17 acres for him to plant and raise food for distribution. He is planning upcoming fundraising events to help purchase the equipment needed for the new operation.

He also hopes to establish a local storage and distribution center capable of storing refrigerated items.

“I don’t have a refrigerated area,” said Franks. “If I had that, I could get more. I will tell you: for the first time in eight years, this week I turned down food. I couldn’t store it. It went to another group, but it just meant that I didn’t have it here in Cullman to give out. I never turn down food.”

As crops come in, the market-–including charitable markets-–can become inundated with items which disappear shortly. If items can be refrigerated, they can be preserved for distribution a little at a time.

Franks added, “What I’d like to do is build a place where they can drop off food boxes, drop off the extra fruits, vegetables, whatever, and I can store it in a refrigerated area, and then distribute it.”

If you need help with food or want to help

Franks called on area farmers with over-abundant crops to consider helping out, saying, “If you’re a farmer and you have extra stuff, call me. I will come and glean it, I will get people to come and glean it. Nothing goes to waste.”

If your household has a need for food, contact the North Alabama Agriplex, Cullman County Extension Office or The Link of Cullman. You can also reach out to these offices for more information on how you can help out or donate. Franks told The Tribune that he and his partners can spend up to $150 per week on gas, driving to pick up and deliver food.

Franks gave permission to publish his number and can be reached at 256-339-6281, or email playingiteasy@yahoo.com.