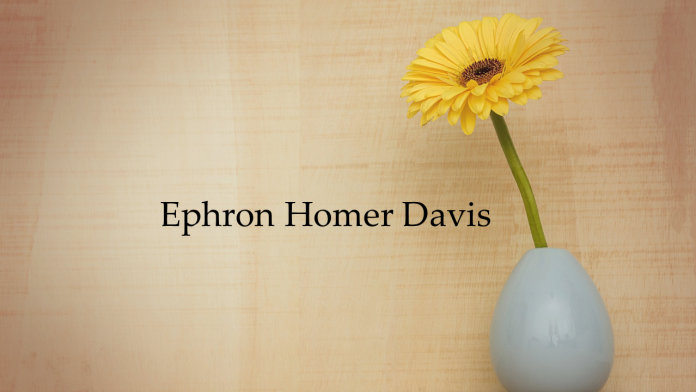 Ephron Homer Davis, lifelong resident of Hanceville, AL, passed at his home peacefully, surrounded by loved ones on April 16th, 2021. Homer was 85 years old at the time of his passing.

Homer was born in Hanceville, AL on January 31st, 1936 to Ephron W. Davis and Linnie Kate (Powers) Davis. Homer was one of eight children and the youngest boy. He graduated from Hanceville High School in 1955 where he was part of Hanceville’s first undefeated football team. He later joined the Army where he served for eleven-and-a-half years. Homer married his wife Dolly on May 6, 1978. He was an expert electrician for 60 years as a member of the IBEW, local chapter 733. He retired at the age of 65 from Ingall Shipyard in Pascagoula, MS and owned his own electrical business, D&D Electric.

Homer was a proud husband, father, grandfather and great-grandfather. He was an avid Auburn fan, a very hard and dedicated worker and was known to give the shirt off of his back to someone in need. He will be greatly missed by all of his friends and family.