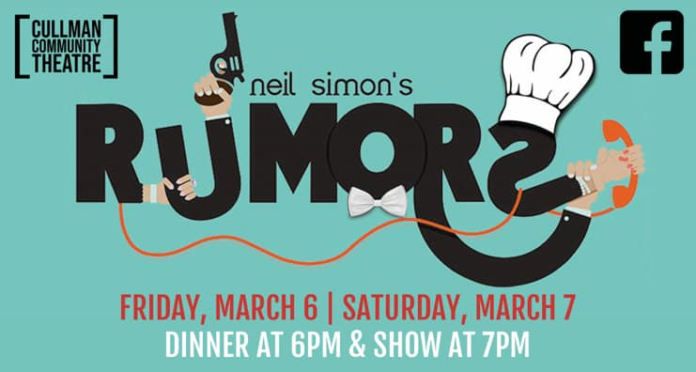 CULLMAN, Ala. – Cullman Community Theatre (CCT) will take on four new projects in one with its production of Neil Simon’s “Rumors” at Stone Bridge Farms in March. The show will be CCT’s first non-musical straight play, first dinner theater presentation, first show geared exclusively toward an adult cast and audience and Melva Jackson’s first outing as a director with CCT (though she has worked closely with CCT director Wayne Cook on previous productions and has numerous directorial credits of her own in other places).

In the farcical comedy “Rumors,” a politician lies wounded from a gunshot after a party while an increasing number of people around him cause increasing numbers of problems for themselves as they attempt to hide what has happened.

Jackson told The Tribune, “We have done two musicals, and we wanted to do something that was non-musical; you know, we didn’t want to just do musical theater. Also, we wanted to do something with adults, with and for adults, because a lot of times, the musicals involve a lot of children and high school students-which is great-but there are things out there that are just for adults. So anyway, we decided we’d like to do one of those in the late winter, early spring this year. So that was basically it: just, we have a lot of adults interested in it.”

CCT’s production operation manager Cindy Pass arranged the venue at Stone Bridge Farms, as Jackson explained, “We thought dinner theater would be fun, you know, and they were willing to take us on, so it all came together!”

Asked what the challenge of this production has been, Jackson responded, “It could have been the cast, but I really lucked out on this cast! They’re really phenomenal . . . Sometimes you’ll have some really great people for the principal roles, and then, you know, not so great as it goes down the line, but everybody in this show is really talented and funny, funny, funny! I just think people are going to have a great time when they come see it. We laugh, and we have to stop because we’re laughing so hard a lot of times. It’s just something the cast does. I have high hopes; I think it’s going to be good. I hate to say that. I don’t want to jinx it, but if rehearsals are any indication, it should be a good show.”

For Jackson, the biggest delight in taking on this production has been “working with people in the community. Really, you know, there’s some people that really haven’t done a lot of theater, but they’re just natural talents; (it’s) just so fun to watch them come out, and making friendships. It’s fun when people are dedicated and they come in ready to work, and you don’t have to run them down and say, ‘Are you coming to rehearsal?’ Nope, they’re there!”

What are folks going to go home talking about after seeing this show?

Jackson shared, “I think it’s going to be funny. Neil Simon is probably the foremost comedy writer of plays in the U.S. He’s passed, but anyway, his plays are just extremely funny. Really, you could just read it and it would be funny, but when you’ve got people who are actually talented and who are committed to the roles, and they make it just come alive, I think people are going to be saying, ‘Wow, that was really funny!”

Jackson warned that “Rumors” is geared toward adults, particularly in its language, though Simon’s original script has been tamed down somewhat. Promising something for everyone through the course of its 2020 season, CCT will also put on an all-ages production of “Hello, Dolly!” this July and a children’s production of “Frozen Jr.” in September.