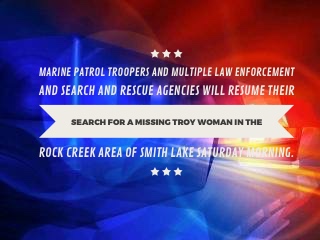 In a press release, Sgt. Chad Pate, MPT, stated Kelsey Nicole Starling, 26-year-old of Troy, was a passenger in a 2012 Mastercraft wakeboard boat involved in a two-vessel crash at approximately 10 p.m. Thursday night.

“The operator of the Mastercraft, 23-year-old William Jackson Fite of Decatur, was booked into the Winston County jail early Friday on a charge of Boating Under the Influence. Four other passengers on the Mastercraft were transported for medical attention by emergency responders,” Sgt. Chad Pate said.

According to the press release, one person was injured on the second vessel, a 2011 Harris Flotebote pontoon boat, operated by 50-year-old Jodi Wallace Suggs of Decatur.

The crash remains under investigation by ALEA Troopers.