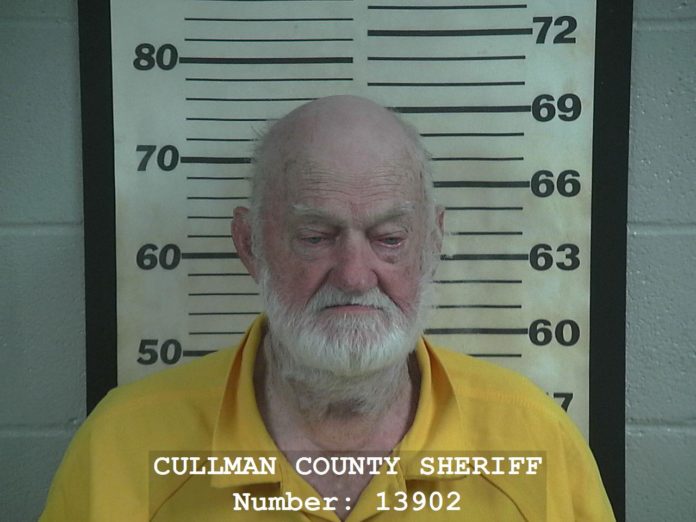 CULLMAN, Ala. – Hanceville area resident Glen Leon Yarbrough, 78, on Wednesday was found guilty of one count of sexual abuse of a child less than 12 years old. The conviction stems from accusations brought forth in 2018 for incidents that occurred during the victim’s childhood in the 1980s.  Alabama has no statute of limitations for sex abuse of children.

According to the victim’s allegations, the abuse occurred numerous times in the family home, and in a vehicle on the family’s property.  The grand jury indictment noted incidents in 1983-84, based on the victim’s original report to the Cullman County Sheriff’s Office (CCSO); in her testimony, the victim claimed the abuse went on for a longer period of time.

Testimony from CCSO investigators included a video interview in which Yarbrough admitted to touching the victim’s genitals, but in his own testimony, the defendant claimed that he had been referring to bathing and other caregiving activities when he said he touched her.  Deputy District Attorney John Bryant countered that statements Yarbrough made in the video were inconsistent with any caregiving.  When, under cross-examination, Yarbrough denied making one particularly condemnatory admission to investigators, Bryant replayed the video for the jury.

Defense attorney Joshua O’Neal attacked inconsistencies in the victim’s testimony about when the abuse began and how long it went on, and pointed out that charges were not brought until 35 years after the incidents in question, when Yarbrough indicated plans to remarry after the death of his wife.

Gail Swafford, of Brooks’ Place Child Advocacy Center, was called as an expert witness on child abuse.  She informed the jury about long-term effects of abuse, why many child victims wait many years to disclose abuse and how memory repression and other factors can lead to changes in a victim’s testimony over the course of an investigation.  O’Neal countered that Swafford’s expertise is in dealing with child victims, not adults and said she was not familiar with this case, having never met or spoken with the victim before.

Swafford told The Tribune later that she had intentionally avoided prior contact with the victim so that her testimony about child abuse in general would not appear skewed toward this particular victim.

After hearing testimony late into the afternoon Tuesday, the jury received instructions from Circuit Judge Gregory Nicholas Wednesday morning before beginning deliberations around 9:30.  Around 11:25, the jury sent word that it had reached a verdict, and presented the verdict a few minutes later.  The courtroom remained silent through the reading of the guilty verdict and polling of individual jurors, but the victim broke down in tears as a deputy came forward to handcuff Yarbrough.

Yarbrough was remanded to CCSO custody pending a sentencing hearing at a later date.

Swafford, who had returned to hear the verdict, quietly remarked as she left the court, “There is no winner here.”

Swafford gave The Tribune the following statement about victims of child abuse:

“It is common for children not to disclose abuse.  Some eventually disclose, some wait until adulthood and some never do.  The core reason for not telling is fear – fear they won’t be believed, fear of hurting loved ones such as their mother, siblings, grandparents, etc., fear of retaliation from the offender, fear of what it will do to the family.

“That fear is also a promise of safety.  The child may be told, ‘Everything will be fine as long as you don’t tell,’ ‘No one will believe you,’ or ‘You will be in as much trouble as I am’ or ‘They will believe an adult before they believe a child.’

“In addition, they’re dealing with internal conflicts of shame, embarrassment, guilt.  The closer the child’s relationship to the offender, the more likely the child will not tell.  The child carries the burden of knowing they have the power to destroy the family, while at the same time, feeling the enormous responsibility of keeping the family together.

“Contrary to what most people think, one can’t tell by looking at someone if they have been abused.  Some children are masters at keeping the ‘secret’ and don’t have behaviors indicating abuse.  Others do exhibit behaviors and characteristics indicative of abuse.  What’s important to know is that children rarely lie about abuse.  If a child tells you he/she is being abused, or you suspect abuse, report it immediately to DHR or law enforcement.”