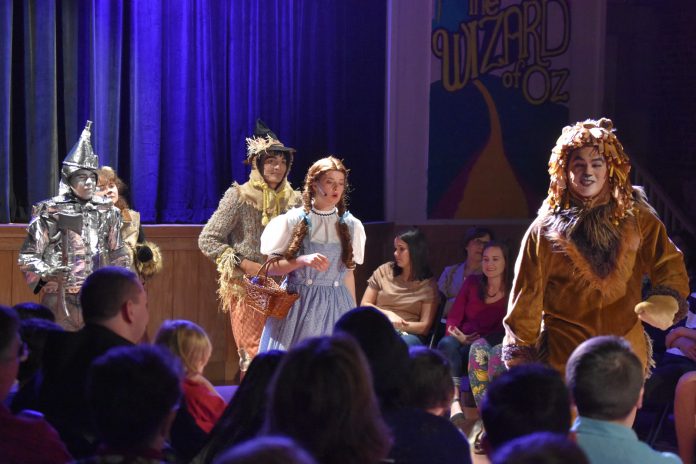 With its “theater in the round” staging, the cast of St. Bernard’s “The Wizard of Oz” gets up close with the audience. (W.C. Mann for The Cullman Tribune)

CULLMAN, Ala.  – Theatrical innovation is becoming the norm in the Cullman area: Cullman High School flying characters over its stage, Cullman County Schools launching its first countywide casting call, Wallace State putting on north Alabama’s first sensory-friendly performance.  On Thursday evening, St. Bernard Prep School’s theater department took its place in the trend with the first of three public performances of “The Wizard of Oz,” staged in the round to bring the audience and cast face-to-face. Action takes place on both the stage and floor of the Abbey Byre; a multimedia video component sets scenes, helps make the Wizard bigger than life and features footage from the original motion picture.

Director Michael Kastner explained, “I think it’s more exciting for the audience, especially if they get there late and they’re in row Z, and their kid’s about this big, clear to the other end of the world.  And I love doing in the round, especially the kid zone (the front row all the way around the floor section of the stage). That’s third grade and below.

“So, little kids, what do they do?  They like television: they want to be as close to the action as they can.  What happens is, when the munchkins and everything come out, the munchkins are going to dance with the little kids in the front row.  It’s very interactive; it puts you right in the middle of the action. In this setting, there’s a lot of things on the stage and in the middle, and at this end (near the entrance); we’re trying to use the entire space, the entire building, just to give everybody ‘I wanna be this close to it.’  I don’t think anybody down here’s done theater in the round before.”

This is Kastner’s first production as the new theater director at St. Bernard.

He shared about the experience: “This is my first year here at St. Bernard so, at the beginning of this school year, it was kind of like they were trying to figure out who I was and I was trying to figure out who they were.  And they all sang for me at the beginning of the year, and I thought, ‘Wow, I have some really nice voices here.’ Then I started thinking: it’s also the 80th anniversary of ‘The Wizard of Oz,’ so that’s another thing, we should celebrate what happened in 1939.  That’s really part of the excitement.

“Those main six leads, they’re very, very talented.  They make me look like I know what I’m doing, really!  And the stage crew people: I’ve got a couple of stage managers that I haven’t told them anything.  They just have kind of said, ‘Come here, little’–I call them puppies: younger kids, seventh and eighth graders–‘Come here; I want to show you this.  This is how we do this.’

“It’s really been a great teaching moment, for me and for them.  I’ve told them, ‘You’ve got to be a sponge.’ Any scenario that I think is going to happen, I’ve tried to put that at them: ‘What happens if somebody misses a costume change?  Okay, what are you going to do to cover for that person until they get in?’ I’m very proud of them. They really have done well.”

Before Thursday evening’s performance, Klucsarits shared, “It’s such a joy to work with such talented people. Over a third of our student body is in the show, so it’s really a blessing that Mr. Kastner brought all these students together.  I think it’s going to be a fantastic show, and I hope that everybody comes out and sees it.”

Performances continue Friday and Saturday evenings at 7 p.m. in the Abbey Byre on the grounds of St. Bernard Abbey’s farm.  Adult admission is $10, students $7 and children $5.