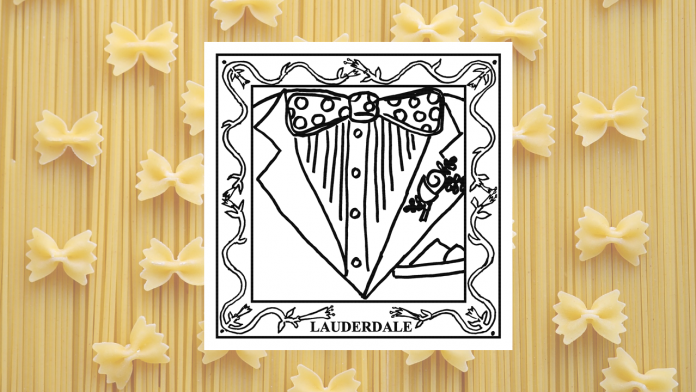 The Alabama honeysuckle border was inspired by an 18th century, Southern applique quilt.

The Cullman Tribune is celebrating the Alabama Bicentennial (1819-2019) with statewide field reporting by Alabama Master Gardener/Botanical Artist Ben Johnson South. This year-long feature, "The 67-County Alabama Garden Party," will spotlight different counties each week. Each county will get its own "quilt block," along with a historical profile, and we'll share a recipe specific to the area. At the end of the year, all 67 counties will be put in a book to commemorate the Bicentennial.

“The coolest county in Alabama” is Lauderdale. That’s true about the cooler temperatures, the state’s northernmost point is about 6 miles northwest of Waterloo in green-forested rolling hills. And, it’s true about the cool vibe of this nationally recognized, fertile mecca of music and fashion creativity.

Up here the locals playfully brag, “Lots of places can be cool, but awesome takes time.”

Lauderdale County, established in Feb. 1818, is older than the state of Alabama.

This Alabama county is the home of Vogue Magazine’s “Menswear Designer of the Year,” Billy Reid, and the headquarters of his fashion empire. Reid is known for what high-toned media have called his “cool, lived-in luxury” and “Southern gentleman sartorialism.” Reid has 12 eponymously named stores throughout the U.S., including his handsome, welcoming flagship in downtown Florence.

Reid’s Southern roots sprouted farther south in Louisiana. He transplanted to Florence, his wife’s Lauderdale County hometown more than 10 years ago. Like his friend, fellow fashion design star, Natalie “Alabama” Chanin, also based in this cool, Alabama creative hotbed, Reid decided to base his work around his life and not his life around his work.

Both fashion designers, Reid and Chanin exalt cool, natural fiber fabrics like open-weave linens and organic cottons which allow the skin to “breathe.” These designers create in distinctive, signature styles very different from each other, but both understand the extreme, stress-inducing heat of Southern summers, and with their cool clothes they help address a warming globe.

*DIP YOUR BEDDING IN THE SINGING RIVER- The 43-foot high mound at the Florence Indian Museum was made by the Yuchi Indians to worship the sun. When you visit you’ll learn about the woven textiles they made from native fibers and about their diet, which relied on wild berries, nuts and sumpweed and eventually evolved with the agrarian culture to include corn, squash and sunflowers. What the Yuchis called “The Singing River,” the Tennessee River, is easy walking distance from the Indian mound. To stay cool when their sun god blessed them mightily with summer heat, the natives would dip their bedding in the river before sleeping.

*SAVE “ICE BLOCKS” FROM THE WINTER PONDS- The Forks Of Cypress, Alabama’s only two-story, colonnaded plantation house, was built in 1830 when the rich soil of this area made cotton farmers rich. Many years ago, a fire burned the main structure to the ground, leaving 23 of the 24 massive, brick columns standing boldly against the sky. Today, this treasure belongs to the State of Alabama and exists mostly as an outdoor history museum. One of the many outbuildings of this property was an “ice house” where large chunks of ice were carved from the plantation ponds in midwinter and saved for cooling drinks and dishes in the warm months. This place is perfect for a picnic as you listen for the sound of thoroughbred horses, which many visitors claim to have heard emanating from the ghostly, plantation racetrack.

*HAND-CRANK ICE CREAM WITH LAUDERDALE COUNTY FRUITS- This Alabama porch tradition remains popular, but another cool option is Trowbridge’s Ice Cream Parlor in downtown Florence (316 North Court St.), enjoyed for as long as anyone can remember, possibly serving the Yuchi Indians who built the prehistoric mound a few blocks away. I always get Trowbridge’s made-from-scratch pimento cheese sandwich, sweet tea and two scoops of orange pineapple ice cream, honored in the Alabama Department of Tourism’s “100 dishes to eat in Alabama before you die.” After slurping your ice cream treat, you can walk it off strolling through the quaint shops and leafy public parks nearby.

*COOL MUSIC FROM W.C. HANDY, “THE FATHER OF THE BLUES”- The scholarly, cool-tempered bluesman was born in a rustic, 1873 log cabin, now a beautifully restored house museum just blocks from downtown Florence, 620 West College St. There is a great archive of cool blues tunes written by Handy. About this music mecca, Handy wrote, “Where the Tennessee River, like a silver snake, winds her way through the clay hills of Alabama, sits high, my home town, Florence.” You’ll see his hand-written song sheets for classics like “Saint Louis Blues,” “Beale Street Blues” and “Memphis Blues” and the old wooden piano from which his original music wafted in the Alabama breeze.

*THE VERY COOL DESIGNS OF ALABAMA’S ONLY FRANK LLOYD WRIGHT BUILDING- The modest-sized, architectural treasure, The Rosenbaum House, is open for tours, and you’ll appreciate the way Wright designed the clerestory windows and outside doors to optimize the natural light and ventilation.

*TAKE A MIDDAY NAP- This may be a national fashion and music hub, but there is still a relaxed, small-town pragmatism; only tourists are on the sidewalks during the middle of summer days.

*BECOME A FAN OF ATTIC FANS- The grand old houses on shady Poplar Street and Wood Street near downtown Florence still hum the heat away.

Positive and pleasurable PLANTS + PEOPLE encounters in Alabama’s coolest county also include these:

*JOE WHEELER STATE PARK—2,550 acres of public camping and hiking pleasure on the 69,700-acre Wheeler Lake- Expect to see sailboats, and even yachts, next to fishing boats hauling in a catch of bass, bream and catfish.

*PLANTING AN IDEA- Billy Reid’s annual SHINDIG FESTIVAL of music, design, food and art began about 10 Augusts ago. It is a cool music and cool fashion destination for throngs of intrepid, summer fest-goers. This would be a perfect opportunity for the nonprofit North Alabama Agriplex (based in nearby Cullman County) to pop up a booth and share information about traditional, sustainable ways Alabamians have kept their cool over the past 200 years. Everything old is cool again.

Y’ALL COME to Lauderdale, “Alabama’s Coolest,” County on your 67-County Alabama Garden Party tour. Every guest is promised a tall glass of something cool and a journal full of cool memories.

The Coolest County in Alabama offers you this fresh, cool salad highlighting locally-grown produce and dapper bites of bowtie pasta. It can be refrigerated and served refreshingly cool for days.