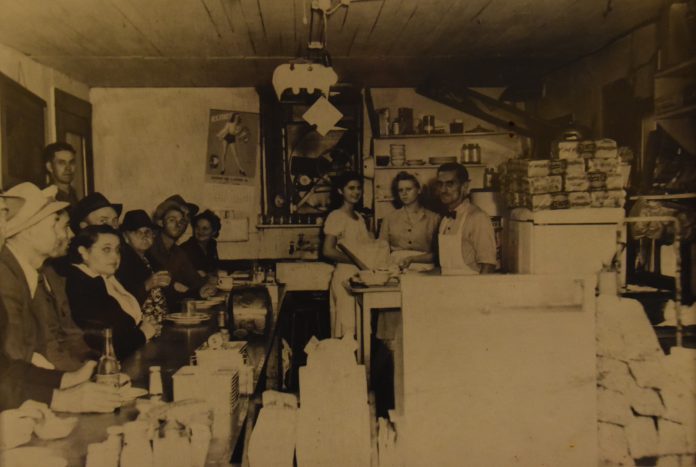 CULLMAN, Ala. – The Busy Bee Café has been around for 100 years: two locations, three buildings, eight owners.  It has seen much of the rise of Cullman as a growing community and even an economic power in the state. Keeping up with generations of change in simple ways like an expanding menu, it has remained a landmark of area tradition right down to the original 1919 hamburger recipe its cooks still use today.

As the Busy Bee gets ready to celebrate its centenary anniversary on April 27–most Cullmanites know why that date is important to the cafe’s story–current proprietors Kyle and Kitty Spears sat down with The Tribune to talk a little history and share about the upcoming celebration.

Do you know the actual date in 1919 that the Busy Bee opened?

Kyle Spears shared, “Apparently, I guess, back in those days you didn’t have to have a business license, so there’s no official start date.  All we know is that it was originally going to be called Ford’s Cafe. It was started by a guy named Milford Ford, and he didn’t have the money for a business sign, so he opened with a name but no sign yet.

“And it got the name Busy Bee Café because, right after he opened, there was an oak tree with a beehive in there; we know it was obviously going to be either spring or summer because of the buzzing bees.

“The reason we just set April 27, it kind of coincides with the tornado, being torn down, rebuilding, reopening, all that stuff, and, coincidentally, it fell on a Saturday, so it works out nicely!”

How did the Spears family become part of Busy Bee history?

Kitty Spears shared, “My father-in-law (Andy Spears), they moved here.  He worked for the oil fields out in Wyoming, and he tried to get a job, even went to Decatur and everything.  No one would touch him because he worked for a union; and back in them days, that was a no-no down south.

“He looked and looked, couldn’t get a job.  And then they just happened to see in the paper: ‘Busy Bee restaurant for sale,’ so he said, ‘I’ll just buy me a job!’  And that’s what they did.”

The Busy Bee hasn’t always been at 101 Fifth St. SE.  It started on the northwest side of the intersection of Third Avenue Northeast and Third Street Southeast (now U.S. Highway 278), where Hagan Real Estate’s office now sits.

The cafe relocated to its present location in 1962, where the Spears family would acquire ownership in 1967.

Kitty Spears talked about the changes the family brought:

Kyle Spears added, “My grandma also said, ‘If you’ve got to be here all day, you might as well make the best of it you can.’  And she knows that some people like the hot hamburgers, some people don’t. But even if you do like the hamburgers, you’re not going to be coming multiple times a week just to get the hamburgers; she wanted multiple things added to the menu.  That way, you could today come get your hamburger and tomorrow, come get you a ham sandwich for lunch, you know, something to keep it fresh, so that way you didn’t get burnt out.”

What is the big menu item today?

Kitty Spears recalled, “Hamburgers was our number one, still is basically our number one seller, but we have so much to choose from any more, you know, so if you don’t like the hamburgers, you’ve got 15 other choices you can make.”

The original hamburger recipe itself has been joined by numerous other burgers, with many non-burger lunch items and a full breakfast menu, as well.

Said Kitty Spears, “Each generation changes it a little bit.”

Kitty Spears married into the Busy Bee and has been around for 30 of the Spears family’s 52-year tenure.  She’s seen a lot of things, including the collapse of the building around her on April 27, 2011, giving her a unique perspective on the diner’s place in the changing Cullman community.

She shared, “We’ve still got the same customers!  We’ve got repeats like you wouldn’t believe. And then, when something like these news articles come out, we’ll get some new faces and they’ll become our regulars.

“It’s a staple.  Everybody tells us that.  They can tell you stories about when they was little kids and coming with their grandpa, you know, and it’s just kept going from generation to generation.  We’ve had people come in and do five-generation pictures here because they all- five generations- somehow connected to the Busy Bee.

“We serve the same original burger since 1919; that hasn’t changed.  The recipe’s just gotten handed down from generation to generation. When we took it over, me and my husband, we added more items from his parents.  And then my kids, they have started adding more items, so it grows because people change; taste and style and everything changes over time. We try to cater to everybody.”

What’s the secret to the Busy Bee burger?

Kitty Spears was short, sweet and to the point but smiling big when she responded, “It’s a secret!”

Then she added, “You either like them or you don’t.  That’s why we’ve got 15 other sandwiches to choose from if you don’t like them!”

Kitty Spears received a permit from the City of Cullman to close the block of First Avenue Southeast in front of the restaurant on the eighth anniversary of the 2011 tornado for a party that promises to be bigger than the little diner itself.  There will be games, bounce houses and live entertainment.