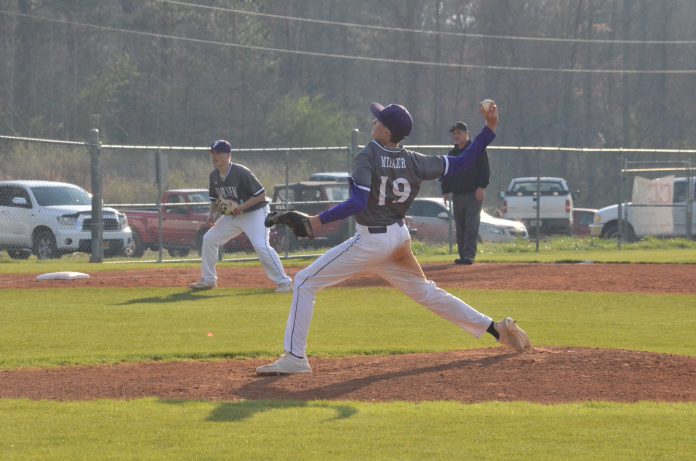 Jarrett Miller (19) allowed just 2 hits and racked up 15 strikeouts in Fairview's 2-0 win at Good Hope on Thursday. (Nick Griffin for The Cullman Tribune)

GOOD HOPE, Ala. – The Aggies traveled to Good Hope Thursday night for a pair of area matchups against the Raiders and a big-time performance on the mound from Jarrett Miller lifted Fairview to a 2-0 win in game one. Miller went all seven innings on the hill and allowed just two hits in the shutout while also racking up 15 strikeouts.

After four scoreless innings, Fairview finally got on the board in the top of the fifth when Dayne Black singled up the middle and drove in Caleb White and Malcolm Parker to make it 2-0. That was all the offense either side could muster, and the Aggies pulled away to win it with Miller on the mound.

Along with Black (two RBIs), Parker, White, Will Bailey, Parker Martin and Dalton Payne recorded hits for Fairview as well. Caleb Rusk and Preston Bagwell collected the only two hits of the game for Good Hope.

After a pitcher’s duel between Jarrett Miller and Bailey Quick in the first game of the night, Good Hope and Fairview started swinging the bats in game two. Both teams scored in the opening frame, but the Aggies plated four runs in the top of the third to go up 6-3. Good Hope trailed 10-6 going into the bottom of the sixth and scored five in the bottom half of the inning to go on top 11-10. Fairview responded with four runs in the top of the seventh and the Raiders couldn’t answer, leading to a 14-11 Aggies win.

Oakley Mullican racked up a game-high RBIs for Fairview in the win and Preston Ryan went 4-for-5 at the plate with two RBIs. Parker Martin (one RBI) and Riley Carroll (one RBI) also collected a pair of hits for the Aggies.

Caleb Rusk drove in three runs for Good Hope in the loss and Lane Speegle finished just behind him with a pair of RBIs. Bailey Quick and Harper Chiaranda each collected an RBI for the Raiders.

With the game knotted at 1 going into the bottom of the fourth, the Eagles plated three runs to go up 4-1 and tacked on seven in the bottom of the sixth to put the game out of reach for Cleveland. Ayden Alexander went 3-for-5 with two RBIs in the win and Jake Abbott (two hits), Lawson Burgess (two hits) and Brodi Williams (one hit) each drove in two runs as well.