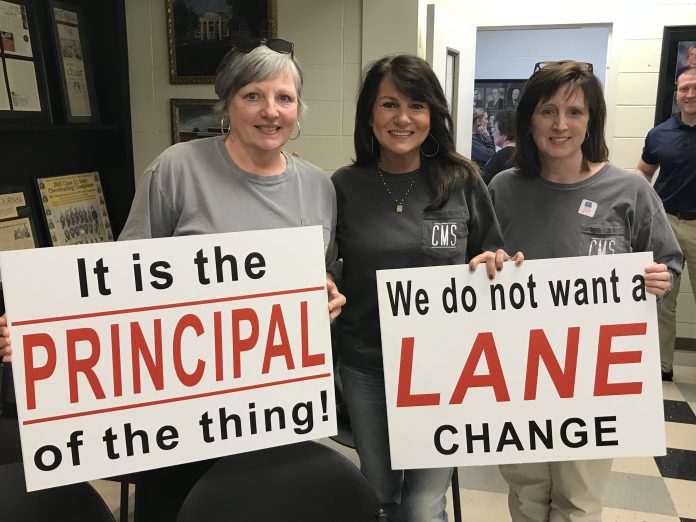 CULLMAN – “A perfect storm” is how Dr. Lavell Thrasher described the circumstances that led to a 3-2 vote by the Cullman City School Board to not renew Cullman Middle School principal Lane Hill’s contract. The board met Tuesday night for the first meeting since the highly contested vote on February 18.

Much like the previous meeting, teachers filled the boardroom and many stood outside as the meeting was standing room only. At the conclusion of normal business, Dr. Lavell Thrasher, former interim president of Snead State, spoke on behalf of those teachers. He spoke passionately about his support for Mr. Hill.

Thrasher said the “perfect storm” was due to “a small group of disgruntled parents who were upset because Mr. Hill would not bow to their will.” He pointed out that although the school board members all want what is best, that it was the two veteran school board members, Jason Neal and Suzanne Harbin, who opposed the recommendation to dismiss Mr. Hill.

Thrasher continued, “Mr. Hill has the support of virtually every employee at Cullman Middle School with the exception of 2, maybe 3. That is unheard of!” He made reference to the large showing of teachers, parents and staff in attendance to support Hill. No representation was made by those opposing Hill.

“Mr. Hill has the support of the students 100%! They respect him so much,” insisted Thrasher. In closing Thrasher challenged the board to question the “silent majority.” He added, “send a questionnaire. Ask do you support the dismissal of Mr. Hill? If you fire a high achieving principal only because he is stubborn, we will be taking a headfirst dive into a cesspool of the educational beyond. I’m imploring for one strong leader to make a motion that the board will reconsider their recommendation of dismissal based on more disclosure.”

School Board President Jason Neal replied, “I will tell you this, the board will consider your request,” resulting in jubilation from Hill’s supporters.

Following the meeting, board member Harbin said, “I’m not sure what the next steps are at this point.” A cautiously optimistic Hill said, “I work with a great group of people. Makes you feel good. We’ll see what happens.”

The next scheduled board meeting is April 16 at 5 p.m.

Wallace State to send $2 million to students in stimulus payments