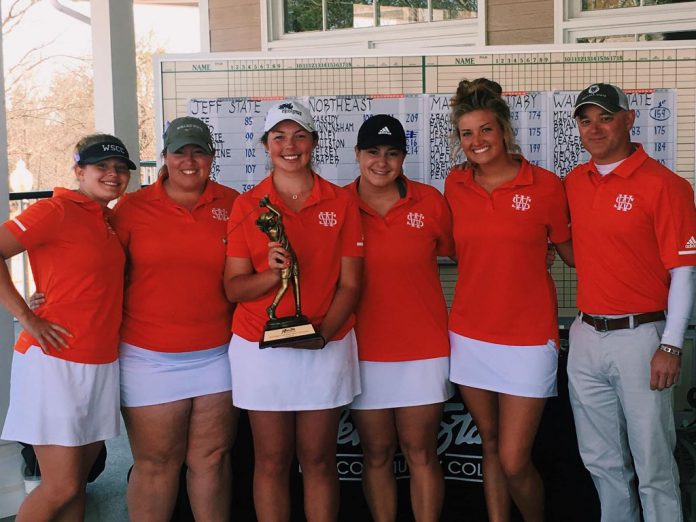 As a group, Wallace State won the tournament by 45 strokes after being tied with Marion Military Institute after the first round.

Bryan captured her fourth career individual low medalist honor at Wallace State with a 15-over par 159. Among her four individual titles, Bryan was the 2018 ACCC Tournament low medalist.

Wallace State’s Maci Yeager, who recently signed with Faulkner University, finished tied for fourth overall, earning her a spot on the All-Tournament team. Yeager carded a 175.

Paige Lemm placed tied for sixth for the Lady Lions and Claire Newby was eighth overall. Abby Grimes rounded out the field for Wallace State.

The Lady Lions, the two-time defending ACCC champions, play at Goosepond Colony in Scottsboro this weekend.

Wallace State’s Sebastian Arce (6-2, 6-1), Andrew Bizilia (6-3, 3-6, 6-2) and Will Brackin earned singles victories against Shorter. The Lions swept doubles action behind the duos of Arce and Brackin, Nick Hester and Ethan Aycock, and Bizilia and Ben Hicks.

In women’s action against Shorter, Haley Putman earned a singles victory. Kailee Upchurch and Crissy Cruz won in doubles for the Lady Lions.

After today’s men’s match, both teams are at home Sunday vs. East Central Mississippi beginning at 1 p.m.

Wallace State’s baseball team has won five of its first six ACCC games after splitting a doubleheader with Lawson State on Wednesday. The teams wrap up the series in Birmingham on Saturday, beginning at noon.

Collin Rogers singled, scored two runs and had a stolen base, while Jack Haney singled and scored.

Kirk accounted for Wallace State’s lone run with a solo homer – his fourth of the season.

‘We may be small, but we are mighty’: Good Hope twirler Jenna Crumpton enjoying junior year