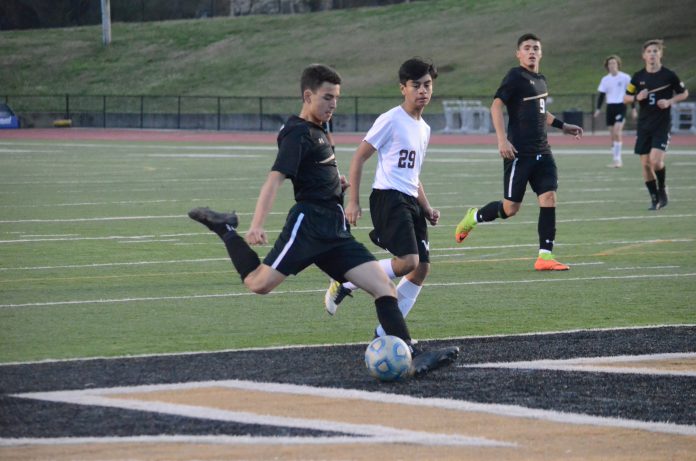 Sam Franklin (1) shoots for the back of the net during Cullman's 6-2 win over West Point Monday night. (Nick Griffin for The Cullman Tribune)

CULLMAN, Ala. – The Bearcats hosted the West Point Warriors on the turf at Oliver Woodard Stadium Monday night and the home-standing ‘Cats collected a 6-2 win over the Warriors. Cullman scored in the opening minutes of the game and West Point responded with a goal just a couple of minutes later, but the Bearcats outscored the Warriors 5-1 the rest of the way to pick up the win.

Juan Sheffield racked up four goals in the win for Cullman, and Greyson Gerding and Mitchell Perez added goals as well. Eduardo Fuentes led the Bearcats with three assists, followed by Washington Sheffield with two assists and Sam Franklin with one. Eli Borden and Jorge Perez both collected a save in the win as well.

Logan Selby knocked in both goals for West Point, and Axel Roman picked up an assist.

Cullman Head Coach Casey Harbin was happy with how his squad performed against a solid West Point team and said he thinks the game could lead to more improvement down the road.

“I’m proud of how we played. We stuck to how we have been practicing and it paid off. We finally showed everyone the team that we can be going forward,” Harbin said. “West Point is well-coached and could be a program to watch.”

The Bearcats will try to stay on the winning side of things when they travel to Sparkman on Tuesday, and the Warriors will try to bounce back at this weekend’s Cullman County Cup starting Friday afternoon.

Carson Holmes, Alex Shoof and John Rose each netted a goal in the Saints’ loss to J.B. Pennington.

Bridget Gallegos scored two goals in the win for the Lady Saints, and Dani Hernandez and Aria McMillan each added a goal as well.