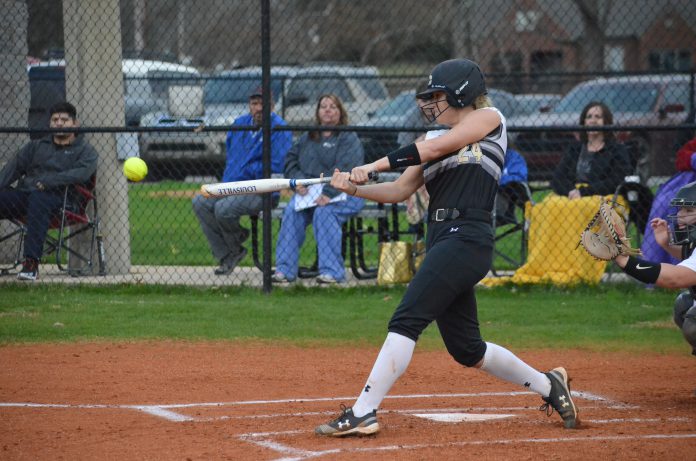 Alex Stansell (24) connects with an RBI single during Cullman's 6-5 loss to Curry on Tuesday. (Nick Griffin for The Cullman Tribune)

CULLMAN, Ala. – The Lady Bearcats opened up the 2019 season at home Tuesday night with a matchup against Curry and Cullman came up just short in nail-biter, 6-5. The Lady Bearcats jumped out to an early lead but couldn’t maintain their strength on offense and Curry was able to come back and win it late.

Cullman struck first in the bottom half of the first inning when Alex Stansell drove in McKenna Kline with an RBI single but after a couple of scoreless innings, Curry took a 3-1 lead in the top of the fourth with a bases-clearing triple. An RBI single stretched the lead to 4-1 in the next inning, but the Lady Bearcats wouldn’t let the Lady Yellow Jackets pull away.

Kline and Savannah Davis came home to score on an RBI double from Carlie Burnham in the bottom of the fifth to cut the lead to 4-3 but Curry was able to get both of those runs back in the top of the sixth.

An RBI single from Kline and an RBI double from Davis trimmed the lead to 6-5 in the bottom of the sixth and Cullman got through the top of the seventh without any damage but couldn’t get any more runs across in the final frame and fell 6-5 to start the season.

Sydney Holder went the distance for the Lady Bearcats on the mound, tossing seven innings, allowing four earned runs on 10 hits and collecting eight strikeouts. At the plate, Kline finished the day four for four with an RBI and three runs scored for Cullman. Burnham led the Lady ‘Cats with two RBIs.

Cullman will try to bounce back with their first win of the season when they host Hazel Green Thursday at 4:30 p.m.

The Lady Raiders traveled to Addison Tuesday night for their second game of the season and went home with a convincing, 18-3 road win.

After a pair of walks, Bailey Swann drove in two runs in the top of the first and came around to score herself on a fielder’s choice to make it 3-0 right out of the gate. An error and a walk allowed two more runs to cross the plate for Good Hope in the top of the second and RBI single from Skylar Tucker extended the lead to 7-0 just a few pitches later.

The Lady Raiders added two more runs on passed balls before Abby Hunt crossed the plate on a fielder’s choice to make it 10-0 going into the bottom of the second. An RBI double off the bat of Morgan Goodwin stretched the lead to 11-0 and two batters later, Swann put the game out of reach with a three-run bomb over the left field fence that made it 14-0.

The Lady Bulldogs were able to tack on a few runs in the fourth and fifth, but it was too little too late and Good Hope pulled away to win it 18-3. Hunt went four innings on the mound for the Lady Raiders in the win, allowing three runs on seven hits and Sidnie English picked up the save after tossing the final inning and collecting two strikeouts.

Good Hope will try to move to 3-0 when it travels to Arab on Thursday.

The Lady Eagles struggled in their season opener at Priceville Tuesday night. The Lady Bulldogs scored 15 in the first inning and added seven more in the second to end the game early. Vinemont was held without a hit in the loss.

Priceville took an early 4-0 lead in the bottom of the second but an RBI single from Brooklyn Knott, a pair of bases-loaded walks and a score on a passed ball cut the lead tied the game at four going into the bottom of the third.

An RBI double off the bat of Knott trimmed the lead to 16-7 and an RBI single from Emilie Hoffman made it 16-9 but it wasn’t enough to overcome the Priceville lead and the Lady Eagles fell to 0-2 on the season with the road loss.

Knott led Vinemont on the night offensively, going two for four with two RBIs in the loss.

The Lady Eagles will try to bounce back with a win when they host Fairview on Thursday.

Susan Moore jumped out to a 3-0 start in the top of the first and doubled it to make it 6-0 in the second. The lead stretched the 7-0 in the top of the third, but a fielder’s choice and a pair of RBI singles cut the lead to 7-3 going into the fourth inning.

Susan Moore tacked on two more runs in the fourth to extend the lead to 9-3 and put the game out of reach for the Lady Bulldogs. Alexia Edwards came home to score on a fielder’s choice in the bottom of the sixth to make it a 10-4 game, but Susan Moore pulled away to win it in the seventh 14-4.

Destiny Short went two for four with an RBI for Hanceville in the loss. The Lady Bulldogs will try to bounce back with a win when they host Oneonta on March 4th.