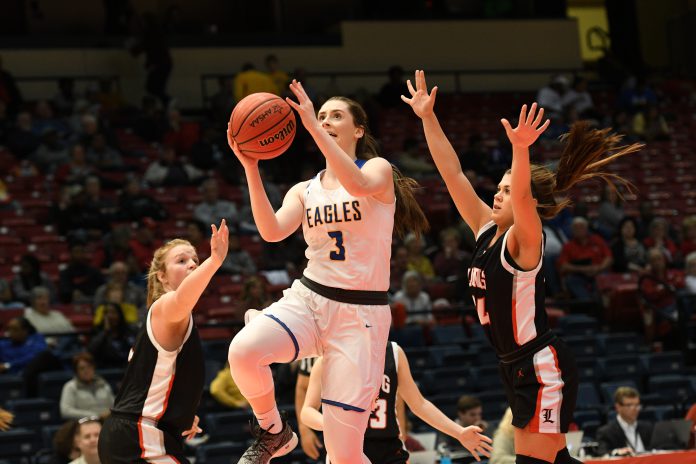 Elizabeth Hill (3) led the Lady Eagles with 16 points in their 52-36 win over G.W. Long Monday afternoon. (Martha Needham for The Cullman Tribune)

BIRMINGHAM, Ala. – Cold Springs made its way to Birmingham’s Legacy Arena at the BJCC Monday afternoon for a final four showdown with G.W. Long, and the Lady Eagles punched their ticket to this year’s Class 2A Girls’ state title game with a 52-36 win over the Lady Rebels.

G.W. Long has been a stout defensive unit all season, and Cold Springs Head Coach Tammy West knew that her team would have to really play well if the Lady Eagles wanted to score some points against the Lady Rebels.

“I knew that they’ve only been giving up an average of 31 points per game and I told the girls ‘Look, we average 65 points per game and we’re going to have to score,'" West said. “I knew it would be a stingier defense than we were used to playing against and we’d have to find ways to score, so I was proud of the girls that stepped up and hit some shots tonight. We were able to open some things up for some other people.”

West plans on watching Monday night’s game between Fyffe and R.C. Hatch to go ahead and start preparing for Friday’s championship game and she’s excited about the way her team is playing together right now.

G.W. Long trimmed the lead to 13-10 early in the second, but a Neely Ellison nailed a 3-pointer midway through the period to stretch the lead to 18-12. A 3-pointer from Kinley Campbell made it a 21-12 game with two minutes remaining in the half and she added another two points in the final seconds of the quarter to give Cold Springs a 25-13 advantage at the break. The Lady Eagles collected seven steals in the first half.

Crider knocked down a three to extend the lead to 28-13 early in the third quarter and Ellison added three more midway through the period to make it a 31-13 game. Campbell laid one in to give the Lady Eagles a 36-18 lead late in the third and we went into the final period with Cold Springs on top 37-21.

Hill knocked down a pair of free throws to stretch the lead to 39-21 early in the fourth quarter, but the Lady Rebels were able to cut the lead to 43-32 by the midway point of the period. Crider nailed a pair of free throws with just under two minutes to play to make it a 46-33 game and the Lady Eagles pulled away to win it 52-36, securing a spot in Friday morning’s state championship game.

Hill led the way for the Lady Eagles with 16 points, followed by Campbell and Crider with 11 and Ellison with six. Cold Springs racked up 12 steals in the win.

Cold Springs will be back at Legacy Arena Friday morning at 9 a.m. to face either Fyffe or R.C. Hatch for the Class 2A Girls State Championship.