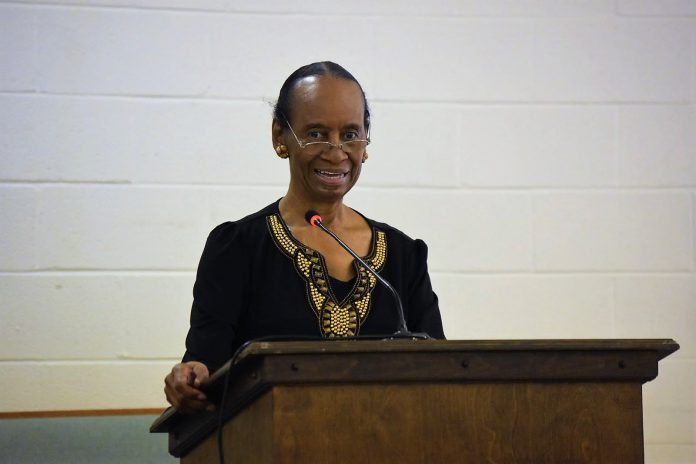 Former Colony Mayor Earlene Johnson shared the story of Sojourner Truth and talked about why she is a member of the Democratic Party Saturday at the Colony Educational Complex. (W.C. Mann for The Cullman Tribune)

COLONY, Ala.  – On Saturday morning, the Town of Colony hosted a breakfast meeting of the Cullman County Democratic Party, with several members remarking about the turnout being the largest in a long time and commending the idea of getting out to community centers for party functions.

After older members told leaders that the morning meetings are easier for those who have trouble driving at night, the group passed a motion to hold morning meetings in local community centers, at least until daylight extends longer into the evenings.

He said of the situation in the state party, “It is divisive, it is ugly, and I look to you for comment and direction, because I will be going down there to vote on these issues when that meeting is called.”

The national committee found what Shabel called “voting irregularities” in its last election in August.

Said Shabel, “As the national party holds that to be true, that will be my position.”

Addressing difficulties in communication within the county party, Shabel said that he will use Facebook and email to get information out and that members who do not regularly access Facebook or local newspapers should contact Josh Freeman and let him know the best ways to contact them.

Cullman County Sheriff’s Office Investigator Trevor Clemmons addressed the group about certain scams growing in frequency in Cullman County, and offered advice on dealing with them:

Former Colony Mayor Earlene Johnson, whom current Mayor Donnis Leeth described as “an icon of the Colony,” gave a woman’s perspective on Black History Month by sharing the story of Sojourner Truth and her famous speech “Ain’t I a Woman.”  She then talked about why she is a member of the Democratic Party, including family tradition and the party’s “best fit for my social, economic and religious profile of what America is supposed to be.”

She pointed to what she said is the Democrats’ concern for the welfare of the poor, children, and the elderly, public education, access to health care, peace over violence and equality between sexes and races, and opportunities for women

According to a motion passed at the meeting, the Cullman County Democrats will meet next at 10 a.m. on the second Saturday in March, at the Cold Springs Community Center.  This meeting will take the place of the regular second Thursday evening meeting.