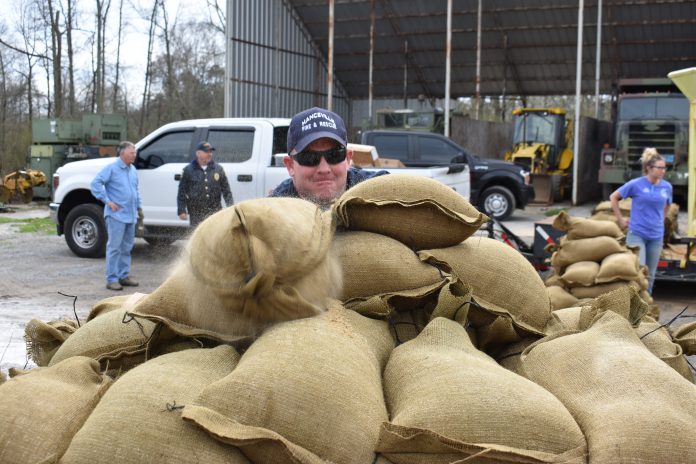 At a municipal maintenance facility in Hanceville on Monday, Hanceville firefighter Nathan Morgan, along with other workers and volunteers, filled trailer loads of sand bags. (W.C. Mann for The Cullman Tribune)

HANCEVILLE, Ala. – Early Monday afternoon, Hanceville city workers and volunteers filled sand bags bound for a flood-prone east side neighborhood, as Mayor Kenneth Nail pushed to get his city ready for heavy rains expected to fall on the region this week.

Cullman County and the surrounding region have already seen several rain events very recently, saturating the ground and bringing rivers, streams and ponds near their maximum capacities.  Days of heavy rain later this week are expected to produce flooding in locations across north Alabama.

Nail told The Tribune, “As everyone knows, for the last several days we’ve had a lot of rain, and the ground is saturated.  Yesterday, Mud Creek was at full table. And we know when we’ve got a situation like this building up over the next few days–I think the weather’s updated a little bit, so it’s our understanding we could potentially get up to 12 inches of rain.

“We have one area over here on Edward Street and East Railroad that has flooded several times last several years, and, matter of fact, Christmas before last, Christmas Day, we were sandbagging.  What we want to do is get ahead of this thing; we want to get this residence over here sandbagged. And we just hope and pray that, you know, it don’t come down in just sheets. If it does, then we may be in trouble.”

The area on Hanceville’s east side is a low-lying zone that suffers from runoff from higher elevations nearby, and narrow drainage ditches and pipes that are prone to backing up quickly during heavy rain.

Shortly before 11 a.m. Monday, Nail announced that, after consulting with Cullman County Emergency Management Agency (EMA) Director Phyllis Little and City Attorney Dan Willingham, he decided to issue a state of emergency for the city of Hanceville.

“We’re just trying to get ahead of it,” said Nail, “and the main thing is, we don’t want our employees and our volunteers, we’ve got several volunteers out here, we don’t want them out here trying to do this while it’s pouring down rain.  It’s a safety issue, also. So, may not need it, hope we don’t.  But if we do, hopefully we’re going to be prepared.”

Little said that while weather forecasts from the National Weather Service have lowered expected rainfall totals for the Cullman area from Tuesday through Sunday to 4.5 to 6 inches, instead of earlier predictions of up to 12 inches, it’s still a lot of rain, and people should be prepared.

“By them doing that, it costs the municipality nothing, but it actually gets them on the record in the long run, it helps them to get out ahead of it,” she said.

Little said more municipalities could follow suit on Tuesday. She said Cullman County could do so, as well as Vinemont.

“We’re working with municipalities,” she said. “Anybody who needs sand bags, we’ll be getting those out to them. We’re trying to keep everything updated on Facebook and Twitter so the general public has as much information as possible.

“Multiple rounds of heavy rainfall are expected starting Tuesday and continuing through Thursday night. Surface soil conditions are saturated and much of this rainfall will occur as runoff. In addition to the excessive rainfall, releases of water along the Tennessee River are expected to result in flooding for portions of the river. The combination of flooding along the Tennessee River and excessive rainfall are forecast to cause many of the local rivers and streams to become overwhelmed and go into flood.”