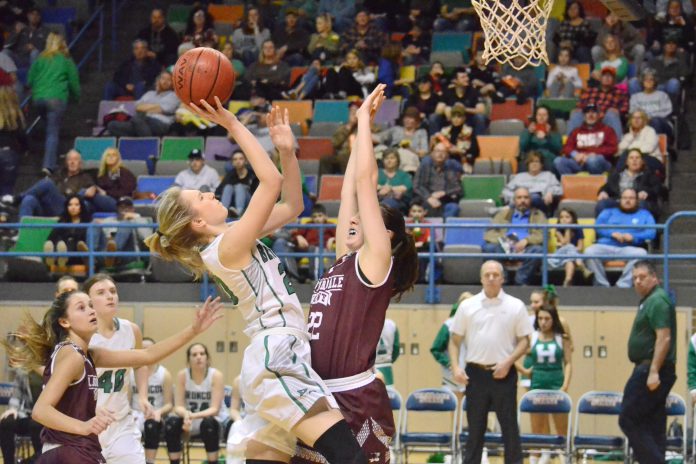 HANCEVILLE, Ala. – A strong 2018-19 season came to an end for the Holly Pond Lady Broncos Saturday night after they fell to Lauderdale County 47-32 in the opening round of the Northwest Regional. This was Holly Pond’s first appearance in the Sweet 16 since 2014 and the Lady Broncos found themselves leading the Lady Tigers early in the second quarter, but they couldn’t score consistently enough on the offensive end.

Both teams got off to a slow start on offense, and the game was tied at six late in the first quarter. The Lady Tigers’ full court pressure led to some turnovers from the Lady Broncos, allowing Lauderdale County to take an 11-6 lead by the start of the second quarter.

Kirsten Campbell shifted the momentum as soon as the second period started by scoring seven straight and putting Holly Pond ahead 13-11. Lauderdale County was able to retake the lead 16-13 midway through the quarter, but Sarah Finley scored while being fouled to cut the lead to 20-19 with less than a minute to play in the half. The Lady Tigers finished the quarter strong once again and held a 25-20 advantage at the break.

Lauderdale County created some separation in the third quarter, stretching its lead to 33-22 early in the period. Both squads had trouble finding the scoreboard for the rest of the period and the Lady Tigers maintained a 36-24 lead at the start of the fourth.

Lauderdale County made it a 42-25 game, but Maddie Heatherly scored to trim the lead to 42-29 midway through the final period. A three from Tess Duke made it a 44-32 game with just over two minutes to play, but the Lady Broncos couldn’t completely chip away the lead and Lauderdale County held on to win it 47-32.

Campbell led Holly Pond with seven points, followed by Finley and Elizabeth Miller with six and Heatherly with four. The loss ends the Lady Broncos’ postseason run and brings their final record to 18-14. Several impact players for Holly Pond will be moving on after graduation this May so there will be plenty of spots for new faces to step up, fill those roles and make another run next season.