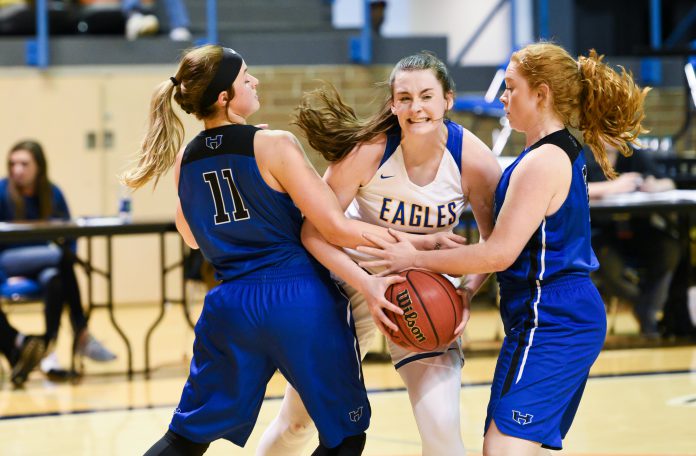 HANCEVILLE – The Cold Springs Lady Eagles were the first of our local teams to tip off regionals action this year and they did it with a 49-33 win over Hatton Friday night. The Lady Eagles held a 27-13 advantage at the half and pulled away to win it with relative ease in the second half to secure a spot in the Northwest Regional finals.

A basket by Elizabeth Hill gave Cold Springs an 8-2 lead early in the opening period and Camryn Crider knocked down a three-pointer to make it 13-4 midway through the first. Crider’s second three-point shot of the game gave the Lady Eagles a 16-6 lead at the end of the first quarter and they quickly stretched the lead to 24-6 early in the second.

The Lady Hornets trimmed the lead to 24-13 midway through the second quarter but a pair of free throws from Hill just before the half helped build a 27-13 lead at the break. Hill outpaced the entire Hatton lineup with 14 points in the first half.

Cold Springs created some more separation in the third quarter by creating turnovers and turning them into easy buckets. Hill pulled down a rebound and tipped it back in while being fouled midway through the third and knocked down the free throw to make it a 38-14 game. Another basket from Hill in the final seconds of the period have the Lady Eagles a 41-18 lead at the start of the fourth quarter.

A layup from Aubrey Negron stretched the lead to 45-21 early in the fourth quarter and Cold Springs cruised the rest of the way to advance to the next round. Hatton cut the lead to 47-31 late in the game but it was too little too late and the Lady Eagles came out on top 49-33.

Hill led all scorers with 26 points along with 10 rebounds. Crider was next with 10 points, followed by Negron with six. Cold Springs will be at Tom Drake Coliseum on Tuesday at 4 p.m. to face Red Bay in the Northwest Regional finals with a trip to Birmingham on the line.