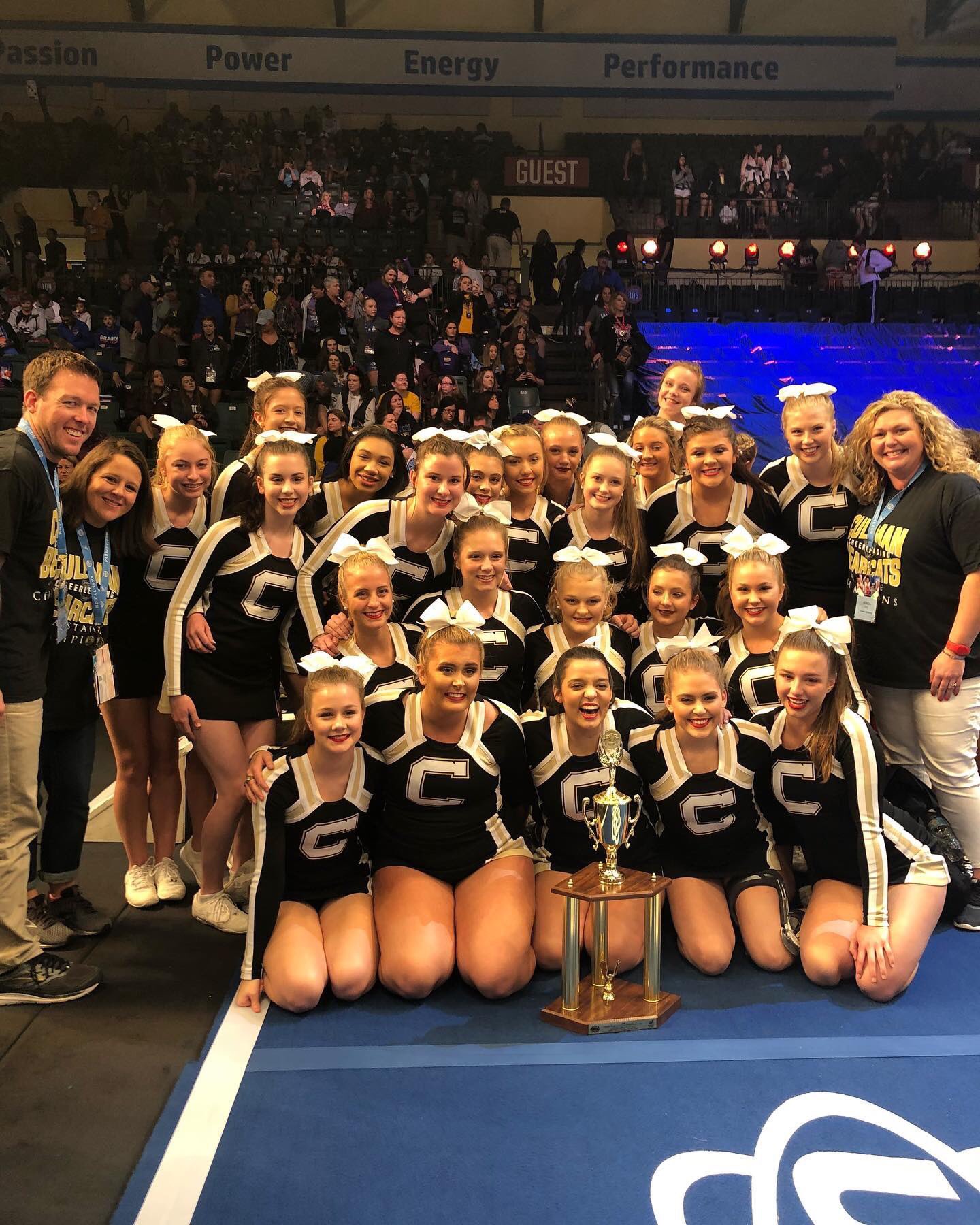 ORLANDO – It was a busy weekend for the Cullman Bearcat Cheer Team. The team traveled to Disney World in Orlando, Florida for this year’s UCA National High School Cheerleading Championship and captured fourth place in the national finals Sunday morning after advancing straight through the national semi-finals with its performance in Friday’s prelims. The Bearcats made school history over the weekend with their fourth-place finish at nationals and by becoming the first Game Day team from Cullman to advance to the semifinals.

It took Bearcats Head Coach Erica Ball a couple of minutes to break down the entire record-setting weekend for her team after it put together such an impressive showing on the big stage.

“I brought 22 cheerleaders with me and this was Cullman High School’s first year to compete in the Game Day division, and that was with all 22 girls on the mat. They did phenomenally well in prelims and advanced to the semifinals, and that was the first time they’ve ever done that, so we are super proud of that accomplishment,” Ball said. “Our traditional Small Varsity team competed in prelims on Friday evening; there are 12 of those girls, and they had a stellar performance and they advanced straight to the finals. There were over 100 teams; only six advanced straight to finals and Cullman High School was one of them.”

After the Bearcats’ standout routine on Friday, they made their way directly to the national stage on Sunday morning. Ball said there were some nerves during prep time, but when the lights came on, the team showed up once again.

“Today (Sunday) we competed in the finals and they had some jitters heading out onto that warm-up mat, but they got back there and just really pulled it together as a team,” Ball said. “Our energy was just super great toda; everyone was in great spirits and they took that same energy from the warm-up mat onto the floor and they killed it.”

Coach Ball largely credited her coaching staff for helping this year’s team get to this point, but they also noticed that this group of girls was special from the start.

“My coaching staff, Josh and Lacy Stancil, who are the owners of Victory Cheer Academy here in town and Stacie Owen, my junior varsity coach, I absolutely could not do it without that crew. This is not a one-man show by any means,” Ball said. “We said right from the beginning after tryouts that this team was special. There was just a chemistry that we hadn’t seen before and this team is special, they’ve been special the whole time.”

Ball and her team had high expectations this year and set their sights very high, but even she was blown away by the way this team performed all season.

“We set some goals at the beginning of the year. We wanted to be super regional champs and we got that, we wanted to win state again and we did, we wanted to advance to semifinals in Game Day and they did that, and we wanted to be in the top 10 in the nation and they blew that out of the water by placing fourth,” Ball said. “That’s the highest finish in Cullman High School Cheer’s history. We saw that chemistry from the beginning. I’ve been coaching seven years and this team has just been a family from the get-go. They were just a super special team.”

With just a few seniors graduating in May, the Bearcats are set up to collect more hardware next season and Coach Ball has already noticed the girls setting their sights on new goals.

“We’re losing three seniors, so I expect we’re going to have an even stronger team next year because this really catapults us. The girls are super hungry,” Ball said. “Today they immediately started talking about their goals for next year. We’re going to have a huge senior class next year, and they’re already talking about their goals for nationals next year and we’re ready to go for it. Something like this just makes the team that much hungrier and more excited for a win.”