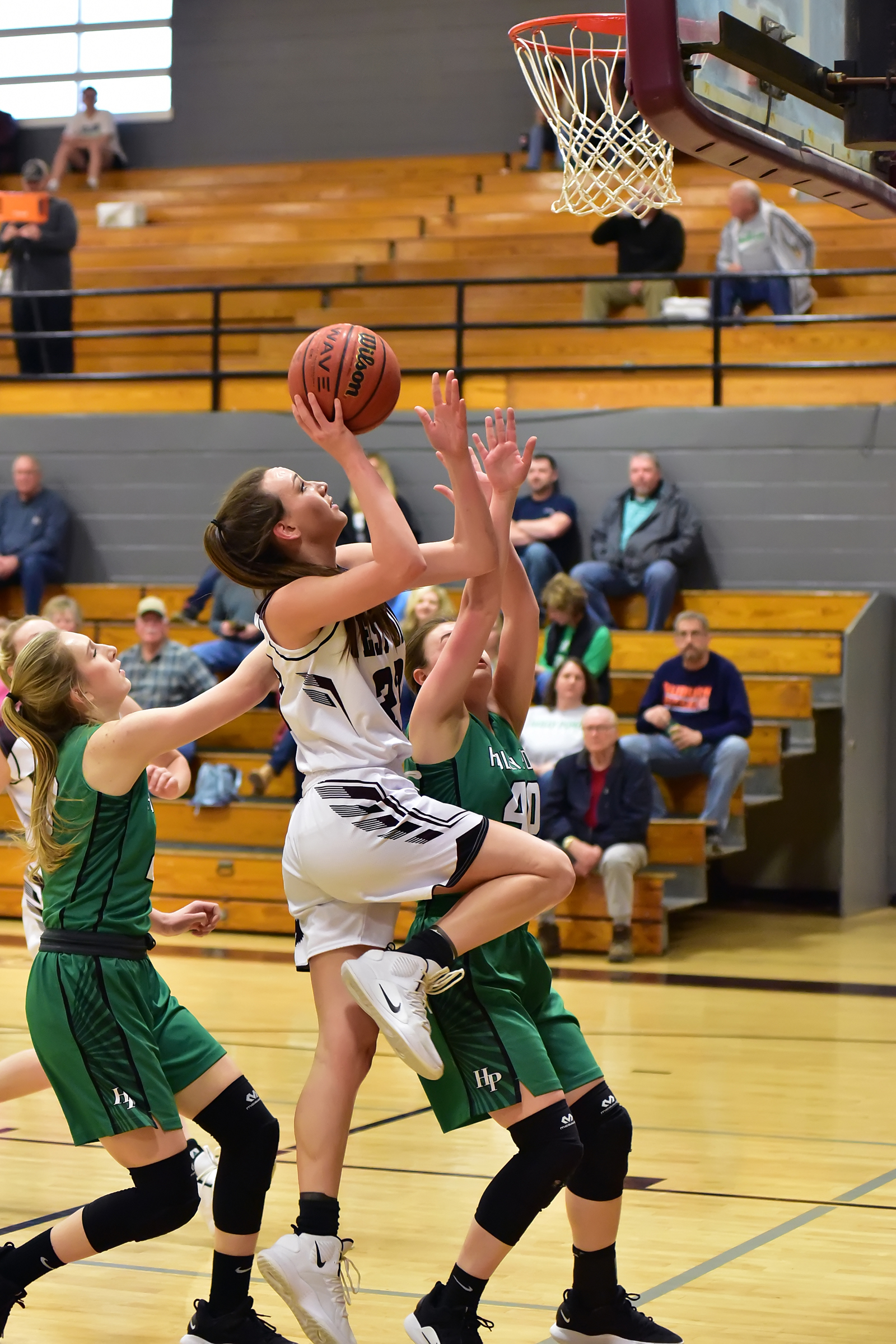 WEST POINT – Friday night was senior night in West Point and there was a very special moment to start out the girl’s game. Both teams agreed to let the Lady Warriors win the opening tip so that Olivia Ball, who missed part of the season with an injury, could get to 1,000 points for her career and she left with a standing ovation on Holly Pond’s next possession. West Point went on to defeat the Lady Broncos 64-51 while the Warriors held off Holly Pond for an 80-77 victory.

Both teams traded baskets to start out the contest but after Holly Pond's Elizabeth Miller hit a layup to make it 9-8, West Point went on a 9-0 run to take an 18-8 advantage. The Lady Broncos cut into the deficit with a Tess Duke trey that made it a 21-15 contest after one.

The defenses took over to start the second period as neither team could get much going, but both teams finished the half strong and tied the game at 29 by the half. Shadix's basket in the quarter also gave her 1,000 points for her career.

The third period was a different story as the Lady Warriors took control from the start. After Holly Pond's Lili Harris made a three to make it a 34-32 score, West Point went on an 11-0 run with Shadix scoring seven of those points to help stretch the advantage to 13 at 45-32. West Point took a 47-34 lead into the final period and wound up taking the game 64-51.

Shadix finished the game with 26 points, 10 rebounds, three steals, and six blocks for the Lady Warriors. Mackenzie Carter added 14 points, nine rebounds, five steals, and four blocks. Micah Oldacre ended up with 11 points and a steal. West Point will host the Class 5A Area 14 Tournament and will take on Russellville next Monday night at 7 p.m.

For Holly Pond, Tess Duke finished the game with 12 points and eight rebounds. Maddie Heatherly added eight points, five rebounds, and a pair of steals. Kristen Campbell ended up with seven points, three rebounds, and a steal. The Lady Broncos will host the Class 3A Area 13 Tournament and will take on Vinemont next Tuesday night at 7 p.m.

Holly Pond used the three ball early as a trio of treys gave the Broncos an early 11-2 lead. Led by some hot shooting from Will Cochran and Kobe Bowers, the Warriors cut the early deficit to just four at 16-12. Then, both teams traded baskets for a little bit before Holly Pond scored the final seven points of the quarter, including a Garrett Rowell trey just before the buzzer, to take a 27-19 lead into the second period.

West Point started the period very strong when Tyler White and Kolton Sapp nailed back-to-back treys as part of an 11-1 run to take a 30-28 lead. The Broncos were held without a field goal for more than four minutes before Rowell ended the drought with a trey to give them a 31-30 lead. A 9-3 Warrior run gave them the lead right back at 39-34 and they wound up taking a 40-38 lead into the locker room.

The Warriors later stretched their lead to 48-40 in the third period on back-to-back threes by Bowers and to 53-43 on five straight points by Tyler Thompson. Both teams traded baskets for a while and the Warriors wound up taking a 62-55 lead into what would be a wild final quarter.

West Point widened their lead even more as Sapp scored the first six points of the period to make it a 68-55 Warrior advantage. After three Bronco free throws made it a 68-58 score, Whitt Laney and Sapp nailed back-to-back treys to stretch their lead to 74-58 with 4:56 remaining in the game. Holly Pond, though, stormed back in the game as they forced some West Point turnovers and turned them into some easy baskets.

They made it a 75-65 game after a Kyler Chaney basket. After the Warriors made it 79-65 on a pair of Sapp free throws, the Broncos continued their huge run as an Isaac Ludwig free throw, a pair of Chaney three-point plays and a Devyn Tankersley layup, cut the West Point lead to just five at 79-74 and a Chaney three from the right corner made it a 79-77 game. Rylan Jones added a free throw to make it 80-77, giving the Broncos a chance to tie the game with 28 seconds remaining. Chaney missed a three, but the ball went off of a Warrior player, giving Holly Pond another chance, but Jones had second thoughts as he deflected the in-bounds pass and got the steal for West Point to seal the 80-77 victory.