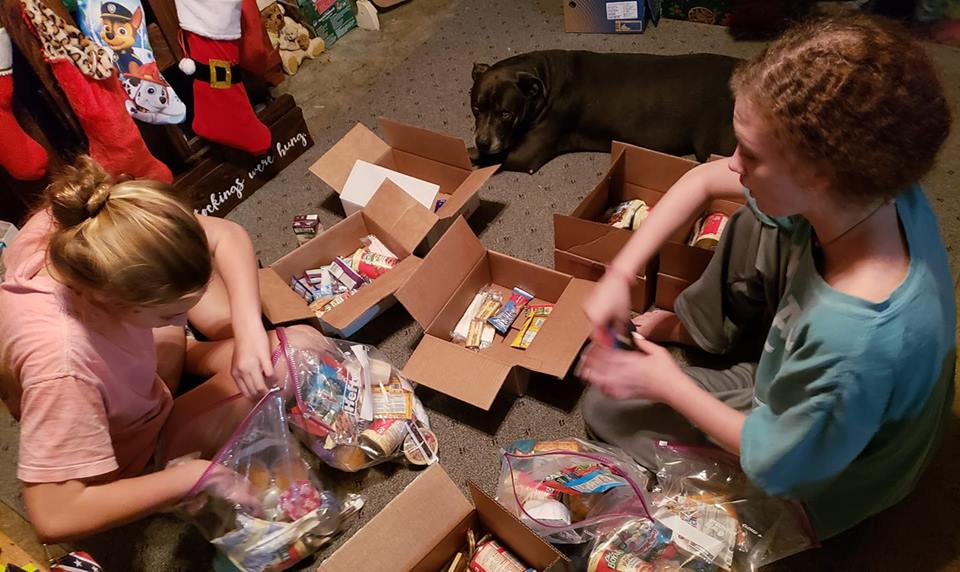 CULLMAN – When Angie Handley Young began to take notice of homeless people around Cullman County, she didn’t think to herself, “Someone should do something.”  She thought, “I should do something.” And she did. She started a group on Facebook named Hope for the Homeless about two months ago and hasn’t slowed down much since.

Young talked to The Tribune about starting her ministry:

“It’s just something I felt like God was telling me to do, was to reach out and offer more help than what was out there already.  And I just started a Facebook group, and then me and my fiancé went out looking for some homeless in the area that we were told about, to try to find them and let them know that we were trying to help them, whether it be with food or blankets, or trying to find a job, whatever it was they needed.

“This is only something I’ve been doing for about two months now.  So, when we first went out, we really didn’t have any luck finding anybody where we had been told there were some staying; so it was just something I prayed about and told God that if this was something He wanted me to do, He needed to lead me where they were.  And from the next day until now, my phone blows up non-stop.

“I have people coming to me, or other people contacting me, saying, ‘Hey, have you talked to so-and-so who is at this location?’  They’re just coming to me, now.”

Despite the short time she’s been in operation, Young has found plenty of need, sharing, “It is very recent, but I have about 17 homeless people that I talk to on a daily basis right now.

“Like I said, when I first started, I couldn’t find any.  But then, after I prayed about it, it was like God said, ‘Okay, here you go,’ and it just started opening up.  There have been days that have went by when I didn’t encounter any new at all, but then there have been as many as three new in a day.  I’ve had people from Falkville contact me. I’ve had people from Decatur contact me.”

Young accepts donations of food and other items, from which she puts together care packages for distribution when needs arise.

Young explained, “I’ll fix gallon Ziploc bags, and I’ll put a bottle of water and a pack of crackers, and maybe a tuna pouch and thing of peanuts and beef jerky, you know, whatever, to give them a variety of different foods, and I put it in the bag.  And I always try to hand out a Bible with everything that I hand out. And I make sure they have dry blankets and they have a coat and they have gloves and toboggan, and sometimes we put hand warmers in there. We give them socks, deodorant, toothbrush, toothpaste, dry shampoo, hand sanitizer, you know, stuff that we use every day that these people don’t have access to.”

What happens when you locate a homeless person or family?

“I don’t send them or take them anywhere, because there’s not a shelter.  I mean, there is a women’s shelter, but they’re full. I offer them food, I offer them clothes.  I will take them to The Link (of Cullman County) to get a shower, if it’s Monday through Friday when The Link is open.  And I try to get their story. I try to find out what their story is, what led you here. And if it’s drugs, then I look for a rehab facility.  If it’s just bad luck, I try to help them out. If they need a job, I try to help them find a job.

“So I don’t really have a place to take them, but I do offer what I can.  And I try not to just say, ‘Here’s some food; have a good day.’ I sit down and talk to them, and I get their story, and I try to help them long-term.”

The need is real

“The last couple nights, it’s gotten down into the 20s,” said Young, “and I know that we’ve had people sleeping in their vehicles.  And if they don’t have any money to run their car, they’re not going to have heat. And then I’ve got some that have slept out in tents, and I’ve got some that are sleeping–one of them has an old trailer that a tree fell on the trailer.  So their trailer has damage, and the trailer has no power and water, but at least he’s in the trailer, out of the elements.

“I mean, there’s different circumstances and different situations, but, you know, on rainy nights and on cold nights, it is nice to have somewhere to go that at least has a roof over their head.”

Young works with other organizations including The Link of Cullman County and Cullman’s Little Pantry, as she works toward making Hope for the Homeless a 501(c)(3) nonprofit.

Said Young, “That way, I can work on grants and stuff to try to get better resources here, because there’s not a lot of resources here.  And I’ve talked to two different restaurants about doing what they call a spirit night; it’s like a fundraiser night where, you know, we can have people drop off donations.  Also, Legacy Salon is a drop-off location for me now, to where people can take coats and gloves and blankets and food up there and drop it off. If we can’t make our schedules collide where we can meet each other, then they can drop it off up there, and I just go pick it up once or twice a week by there.”

Young is seeking volunteers, churches and organizations to help out in various parts of the county, to offer more and faster responses to reported needs, and to take some of the burden of response off of herself and her fiancé.

A few local donors and organizations have stepped up to help on specific occasions, including paying for nights in a hotel and opening a church basement to two homeless people on a sub-freezing night.

Hope for the Homeless accepts donations of

Young is also seeking places that homeless people with disability or other limited income might rent, places where the homeless might be housed temporarily and even land owners willing to allow tents to be set up on their property.