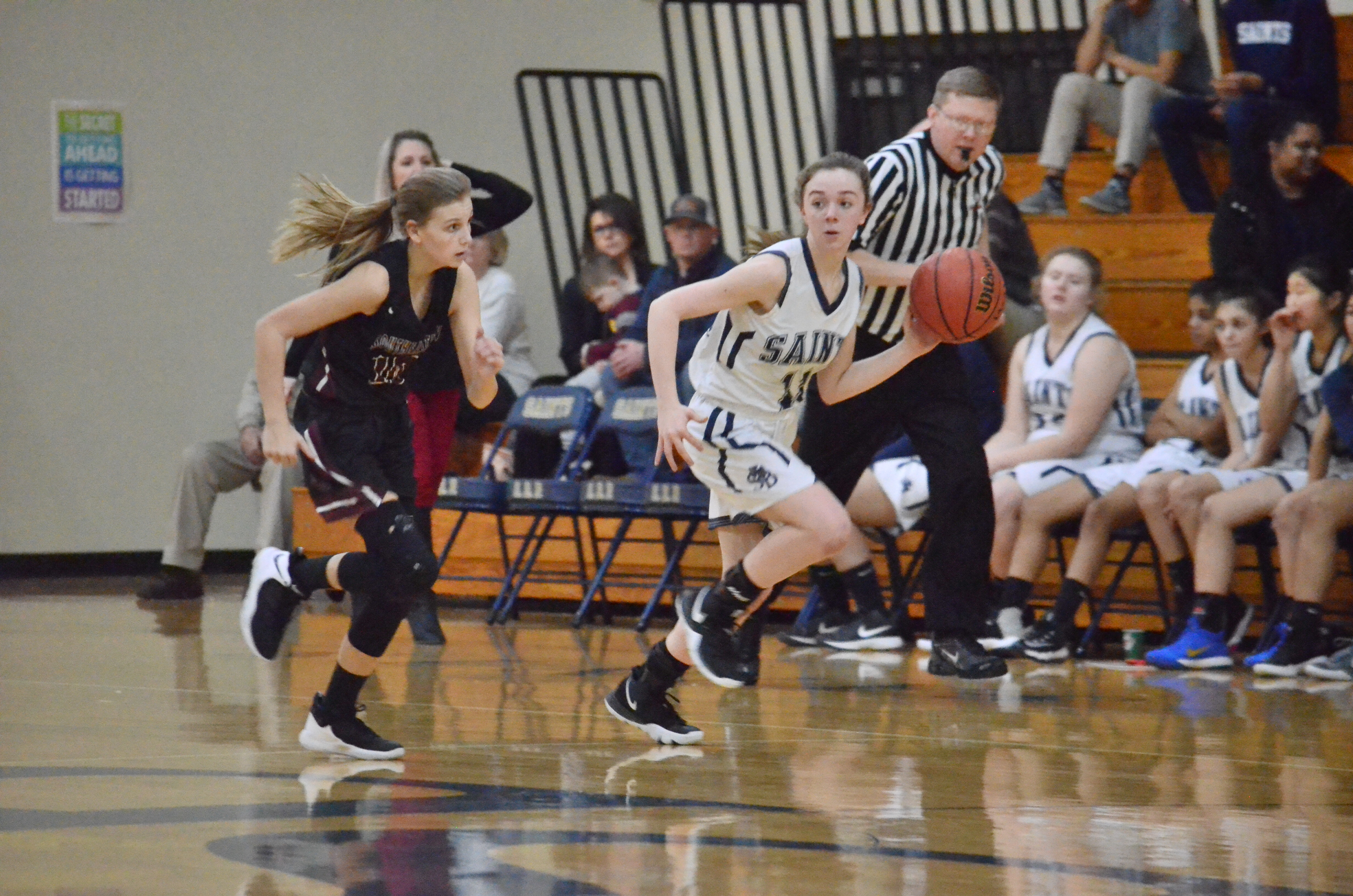 St. Bernard's Claire Sanders sprints past a defender in the Lady Saints' 40-27 loss to Southeastern Monday night. (Nick Griffin for The Cullman Tribune)

CULLMAN – Southeastern made the trip to St. Bernard for a pair of varsity matchups against the Saints Monday night and the Mustangs went home with a pair of wins. The Lady Mustangs defeated the Lady Saints 40-27 and in the boys' matchup, Southeastern held off St. Bernard 54-41.

The Lady Saints fell behind early in this one as they were held scoreless for the first half of the opening quarter and Southeastern jumped out to a 5-0 lead. St. Bernard was able to make it a 10-5 game by the end of the period, but turnovers from the Lady Saints in the second quarter allowed the Lady Mustangs to extend their lead. Emma Tafazoli scored with 30 seconds remaining in the half, but St. Bernard still trailed 20-12 at the half.

The Lady Mustangs stretched their lead to 26-15 by the end of the third quarter and more turnovers from the Lady Saints helped them get off to a 6-0 start in the fourth. A Tafazoli layup with two minutes left to play cut the lead down to 10, but it was too little too late for St. Bernard and Southeastern held on to win it 40-27.

Tafazoli led the Lady Saints with nine points in the loss, followed by Claire Sanders and Emma Powell who each scored six. St. Bernard will look to bounce back when the Lady Saints travel to play Lynn Tuesday night.

The Saints were able to take advantage of turnovers early in the first quarter and built a 10-5 lead midway through the opening frame. Southeastern was able to battle back and tie the game at 14 by the end of the quarter and got off to a 6-0 start in the second period. The Mustangs continued to build their lead until a 3-pointer from Carson Holmes made it a 22-19 game midway through the second. Two good free throws from David Kim cut the lead to one with less than two minutes to play in the half, but Southeastern finished the half on a 6-0 run and took a 28-21 lead into the break.

John Rose led the Saints with 13 points in the loss, followed by Holmes with 12 and Kim with eight. St. Bernard will look to get back in the win column Tuesday night when the Saints travel to Lynn.