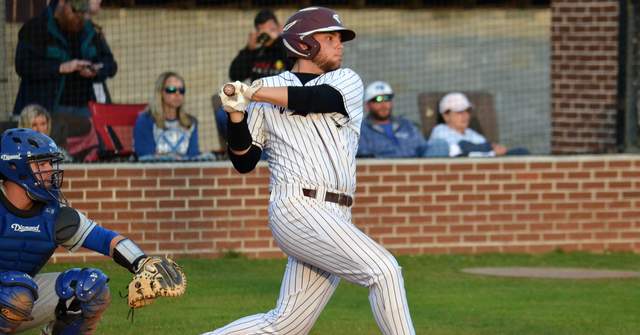 Matthew McDonald hits a solo homerun to put West Point up 8-0 in its game one win over Mortimer Jordan in round two of the AHSAA Baseball 5A State Playoffs. (Nick Griffin for the Cullman Tribune)

CULLMAN – 2018 provided some big seasons and a lot of great moments. From Good Hope's historic football season to Hanceville's incredible run in basketball, last year provided a lot to remember. Let's take a look back at all of the great seasons and moments from 2018.

Addison's volleyball team finished 53-11 on the season and added yet another state championship to their trophy case after defeating Winston County 3-2. Their football team also had a big year as well, making it to the quarterfinals of the playoffs before falling to Aliceville 38-22 to finish with a 10-3 mark.

The Cold Springs Lady Eagles didn't finish out the 2017 basketball season strong, but 2018 was a different story as they started out 5-2 in the new year. Despite falling just short in the Cullman County Championship Game against Fairview, Cold Springs stayed focused and wound up capturing the Class 2A Area 13 championship. The Lady Eagles defeated Tanner in the sub-regional game and took down Lamar County in the regionals before falling to Phil Campbell just one game away from advancing to Birmingham. They finished the season with a 21-13 record.

Cullman's baseball team looked to add another state championship to their trophy case after last winning it in 2015. After coming up short in the championship game the next two seasons after that, the Bearcats, behind a senior-laden squad, were determined to make it back to the championship game and win their second title in the past four seasons. They steamrolled through the season and finished with a 27-8 mark. In the playoffs Cullman swept Hartselle, Pell City and Homewood 2-0 to move on the championship game against Hazel Green. The Bearcats took game one 5-2 but then the Trojans tied the series at one with a 2-1 win in game two. With a chance to advance to the championship game at home, Cullman gave it all they had, but fell short 6-1 to finish with a 32-9 record.

Fairview's girls had another great basketball season in Mary Lauren Hartline's final season coaching there. After winning the Class 5A Area 12 tournament last year and coming up just one game short of making it to Birmingham for the first time ever, the Lady Aggies looked to make yet another deep postseason run this season. They made it back-to-back 20-win seasons and added yet another area championship trophy. Fairview won their sub-regional game over Mae Jemison before falling to Wenonah at Wallace. Fairview's boys also had a memorable season as well in Branch Whitlock's first and only season as head coach. They won the area championship and their sub-regional match-up before falling to Wenonah in the regionals. The Aggies finished the year with a 15-15 record.

Good Hope had a pair of teams have some very memorable seasons in 2018. Good Hope's varsity girls' basketball team had a memorable 2017 season as they not only won the area championship, but also their sub-regional game at home against Winfield to finish that year 10-17. 2018 was more of the same for the Lady Raiders as they won back-to-back area championships. They took their sub-regional game against Wilson before falling to Danville to finish the season 10-18.

The last time Good Hope's football team finished with more than 11 wins in a season was in 1997 when they finished 13-1 and made it to the semifinals. 21 years later, the Raiders had a season that no one will ever forget as they rolled to a 9-1 regular season and were 5-0 at home. They took down St. John Paul II on the road 62-28 in the opening round of the playoffs and defeated No. 2 Jacksonville at home 27-12 before falling on the road at Oneonta 29-8 to finish the season with an 11-2 record. Matt Dixon, Isaiah Green and Bailey Quick were named overall, defensive, and offensive players of the year respectively. Coach Alan Scott was awarded Coach of the Year, while several other players were selected to the first-team, second-team and received honorable mentions as well.

Hanceville's boys’ basketball team had a memorable season after finishing the previous season strong. After starting out 3-3, they won 10 of their next 13 games to improve their record to 13-6 overall. The Bulldogs hosted the area tournament and wound up winning the area championship. They squeaked past East Lawrence in the sub-regional game and pulled off a huge upset of No. 5 Holly Pond 65-59 at regionals before falling just short against Lauderdale County to finish with a 19-10 record.

After coming up just one game short of making it to the championship game last season, Holly Pond looked to make it back to Birmingham and looked determined to do it again as they rolled through the regular season. The Broncos won the county championship and added yet another area championship. They took down Colbert Heights in their sub-regional match-up but got stunned at regionals by Hanceville to finish with a 28-4 record. The Broncos added another playoff berth to their football resume as they clinched their third straight trip to the postseason in 2018, finishing 6-5 on the season after their first-round loss to Geraldine.

Meek's varsity boys’ basketball team had a huge turnaround from their previous season as they went from 13 to 25 wins in the 2017-2018 season. The Tigers won their second area championship in the past three seasons and won their sub-regional game against Tharptown before falling to South Lamar in Regionals at Wallace State.

West Point's baseball team had a very good 2018 season as they started out 8-2 and wound up making some noise in the playoffs, defeating Pleasant Grove 2-0. Their next opponent was Mortimer Jordan and the Warriors took game one 8-1 but they fell in the next two games 12-0 and 13-5 to finish with a 20-14 record.