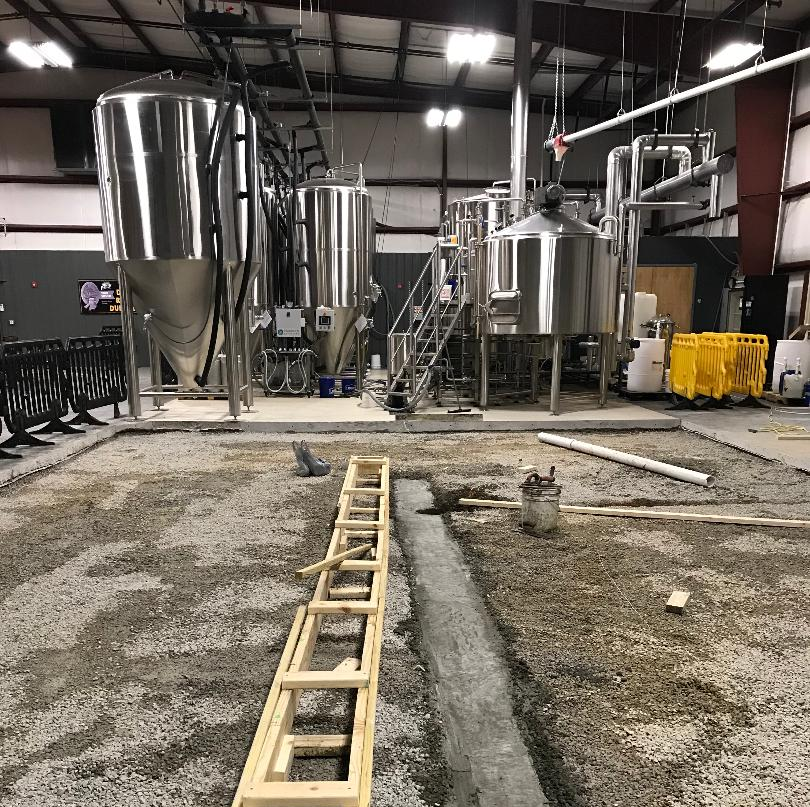 More than 1,000 square feet of Goat Island Brewing’s floor had to be taken up to put in a new reinforced floor with drainage for the new equipment.  (Photo courtesy Mike Mullaney)

CULLMAN – Goat Island Brewing, Cullman’s hometown brewery, known for its revival of an original 19th century Richter’s Saloon recipe, among other popular flavors, is currently undergoing a third expansion to its brew floor in as many years of business.  The brewhouse, located at 1646 John H Cooper Drive on Cullman’s south side, features an in-house tap room for customers to come and try its beer, and on weekends, listen to live music. While Goat Island does not regularly serve food, customers are free to bring in what they like, and the tap room is often served by food trucks and caterers like Freddie Day.

The local popularity of the tap room is not what’s driving the growth, though.  The main reason for the expansion, according to President/CEO Mike Mullaney, is the growing demand for Goat Island beers all over the state of Alabama.

Mullaney told The Tribune, “One beer in particular has caused a stir: that is the Blood Orange Berliner Weisse, a tart German-style wheat beer brewed with real blood orange.  It is a gorgeous orange beer with a lush orange aroma.”

“Our distributors always ask for more than we can give them,” said Paul White, Goat Island’s brewmaster who created the new brew, “so we have to expand our capacity to keep up.”

To accommodate new equipment, Goat Island had to increase the size of its brew floor because it has simply used up all the space it started with.  The brewery is getting more tanks and is also adding more capacity to its chiller that keeps the fermenters at the proper temperature as the beer goes through the fermentation stage.  About 1,000 feet of the existing concrete has been cut up and a thicker pad with a drainage system poured.

According to White, the extra chilling capacity and brew floor is more than they need now.  However, this should allow them to expand even more as needed over the next few years.

“We are experiencing growing pains,” said Mullaney.  “The brewery is not yet three years old and is already going through a third expansion to keep up with demand.  Adding capacity while still keeping up with our orders is making for a busy end of the year for the brewery, but that is a very good problem to have.”