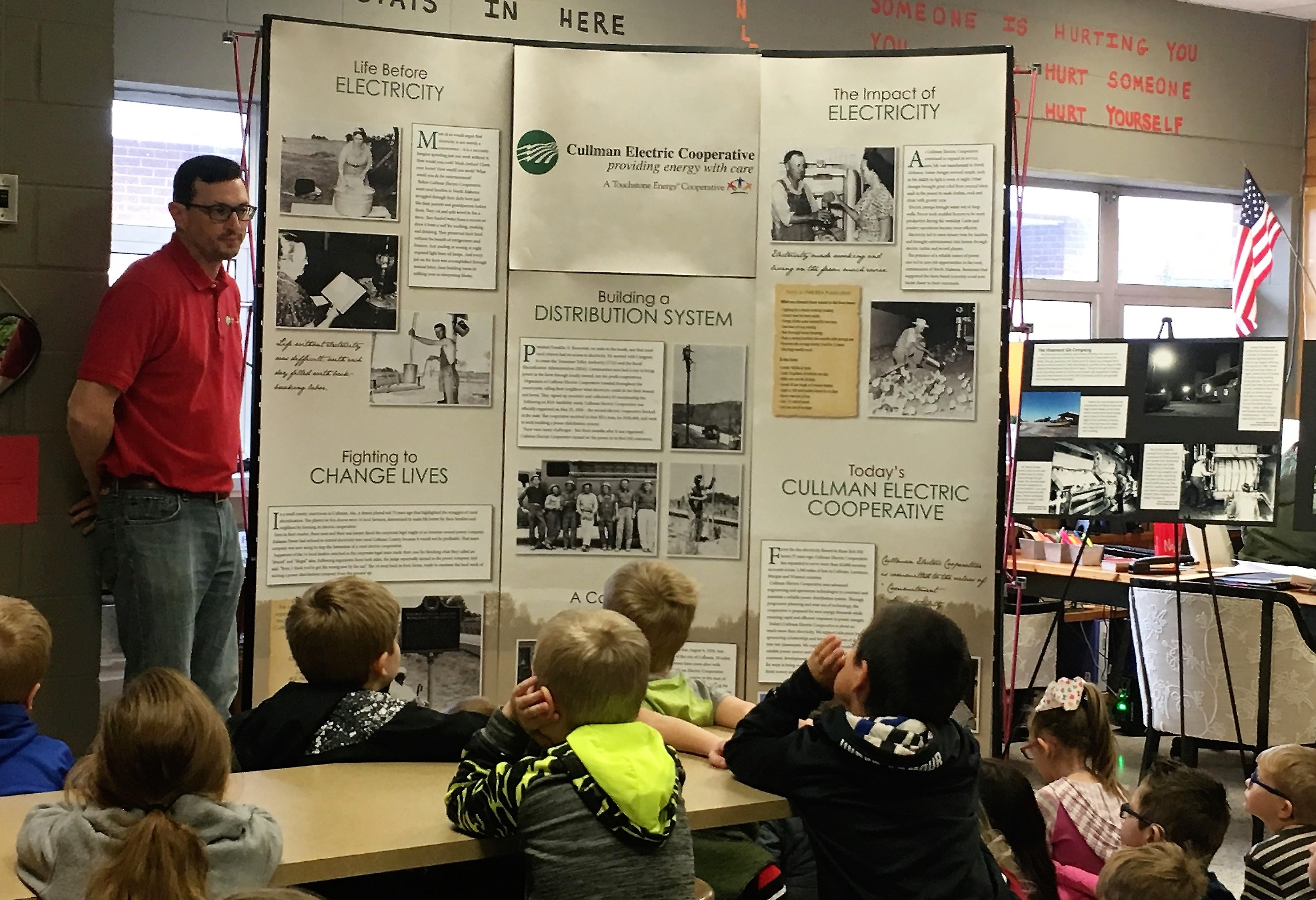 VINEMONT – In its eighth year, Vinemont Elementary School’s History Day was expanded this year, thanks to the state’s Bicentennial, the Alabama 200, celebration, to share the area’s heritage with a larger group of students.  Former Vinemont Principal Dr. Jane Teeter and music historian Dr. William Mann, who led last year’s program for fifth graders, returned this time to present to third through fifth graders, with additional presenters including:

Principal Kim Brown said, “Alabama’s having the Bicentennial celebrations, and we wrote a Bicentennial grant–we were awarded a $2,000 grant.  And we decided to focus on the history of Vinemont and its uniqueness, so the community could understand where they came from, so the kids could learn all about how Vinemont came to be, and why it’s here, and all the different incarnations it’s had.  And so that’s why we did Vinemont History Day.

“I think one of the cool things today has done, it’s shown them how Vinemont ties in with lots of things they probably didn’t think about: how Vinemont and Cullman played a role in putting a man on the moon and many NASA projects, how the gin at Vinemont was one of the first outdoor lighting projects in Cullman County through the Co-op.  And then we had Dr. Jane Teeter, who has carried all third, fourth and fifth graders around the community on a bus, telling them about the unique history of each place–from Holmes Gap to Pinnacle to Vinemont, and about the schools and how they all got to be where they are, and how Vinemont became Vinemont Eagles instead of Holmes Gap Eagles.”

Brown continued, “I think it gave the kids some pride in our school, in our community, in their community.  This is who we are, and it’s really cool!  We’ve gone far beyond Vinemont: we’ve helped Neil Armstrong carry something to the moon, we’ve helped light the community.  I think it was really good for them.”

Michelle Schlosser, who hosted one of the stations in her classroom, said of the students, “They were all actively engaged.  To me, it seemed like they were truly interested. It’s something they were not used to seeing . I think they truly enjoyed it.  They didn’t want to leave when their time was up in here.”

After the conclusion of the event, fifth-grade teacher Jacqueline Hill told The Tribune, “Our Vinemont History Day was a great event that connected generations.  I asked several teachers and students what they liked about today’s events, and the bottom line was that they learned something they didn’t know before. From all the responses, it was plain to see everyone connected to one or more of the stations.  One of our fifth-grade students said they were shocked to learn that there was once a hotel and amusement park at Vinemont. A second and third grader said their favorite part was seeing and hearing the old instruments. After listening to the Sacred Harp Singers, one student said it was interesting to find out that they used shapes like triangles, circles and squares to sing songs and they still do that today.  Several were proud to learn that business in Cullman helped send rockets to space.

“Students are always eager to learn about Native American artifacts, and the presenters today certainly had the students’ attention.  At one of the stations the students saw an old washing machine and, after it was explained how it was used to wash clothes, they were really glad that washing machines had improved over the years,” Hill smiled.

“I personally enjoyed all of the stations, even the one from the Cullman Electric Co-op where I was only one of three adults in the room who not only knew what and where the drive-in theater was in Cullman, but actually had watched a movie there before,” said Hill. “All in all, I’d have to say it was a great day.”

Vinemont’s Community History Day, scheduled for Saturday, Dec. 8, was canceled due to the threat of bad weather.  It has been tentatively rescheduled for April.