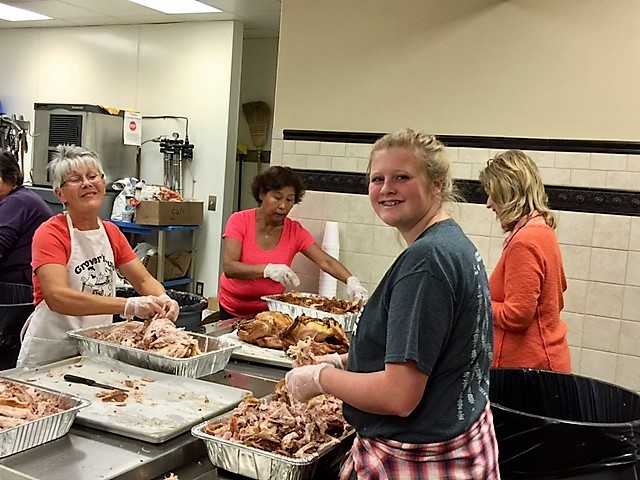 Volunteers work happily at the Grover Reeves meal in 2016. This year’s meal will be on Thanksgiving Day, Thursday, Nov. 22, beginning at 11 a.m. at St. John’s Church. (Cullman Tribune file photo)

Reservations for delivery should be made by noon Tuesday, Nov. 20.  Walk-in diners on Thursday do not require reservations, but they are encouraged to call ahead.

CULLMAN – Twenty-four years ago, a charitable visionary named Grover Reeves approached area ministers with the idea of a community meal around Thanksgiving, for people who could not afford to prepare a full meal.  Concern over the potential number of local residents who might not have family with whom to spend the holiday led to the placement of the dinner on Thanksgiving Day. On that day in 1994, local churches came together at First Baptist Church in Cullman for the first installment of what would become the Grover Reeves Community Thanksgiving Meal.

In 2016, after 22 years and more than 20,000 meals served, steadily increasing numbers forced the meal to be relocated to St. John’s Evangelical Protestant Church at 512 Second Ave. SE, whose facilities could better meet the larger need.  Over the last few years, an average of more than 1,000 people annually have received meals, including dine-in visitors, emergency responders and dispatchers, law enforcement officers, residents at The Foundry Farm, and inmates at the County Detention Center, as well as numerous area homebound residents whose meals are delivered by event volunteers.

Reeves passed away in 2016, but enthusiasm for the community fellowship meal has only continued to grow.

Event Coordinator and St. Johns Administrative Assistant Karen Hassell told The Tribune, “We served over 1,800 plates last year.  We had about 200 or a little over that ate in last year, and then the rest were delivered throughout the county. Last year, we had over 125 volunteers, and it was a wonderful turnout.  I hope we have somewhere close to the same this year.”

Diners can just come to the church on Thursday for dinner, but coordinators request that they call ahead between now and then, so volunteers will have some idea about how many dinners to prepare.  If you’re planning to come, you can call St. John’s or First Baptist Church (see numbers below).

Said Hassell, “It’s just such a blessing to be able to help get a meal to them that, for some unknown reason, can’t prepare their meal that day because of financial hardship, or because–could be that they’ve lost a spouse or due to sickness in their family, you know, or something like that, that we can provide that meal for them. It’s just such a good thing, and we just have to have lots of volunteers to help pull it off.”

Volunteers are still being sought to help serve at the church and to help deliver meals around the county.  Contact numbers are below.

The menu for this year includes turkey, gravy, dressing, green beans, corn, rolls and dessert.  Drinks will be served at the church. St. John’s has long provided pound cakes and expects to serve 125 of the dessert delights.