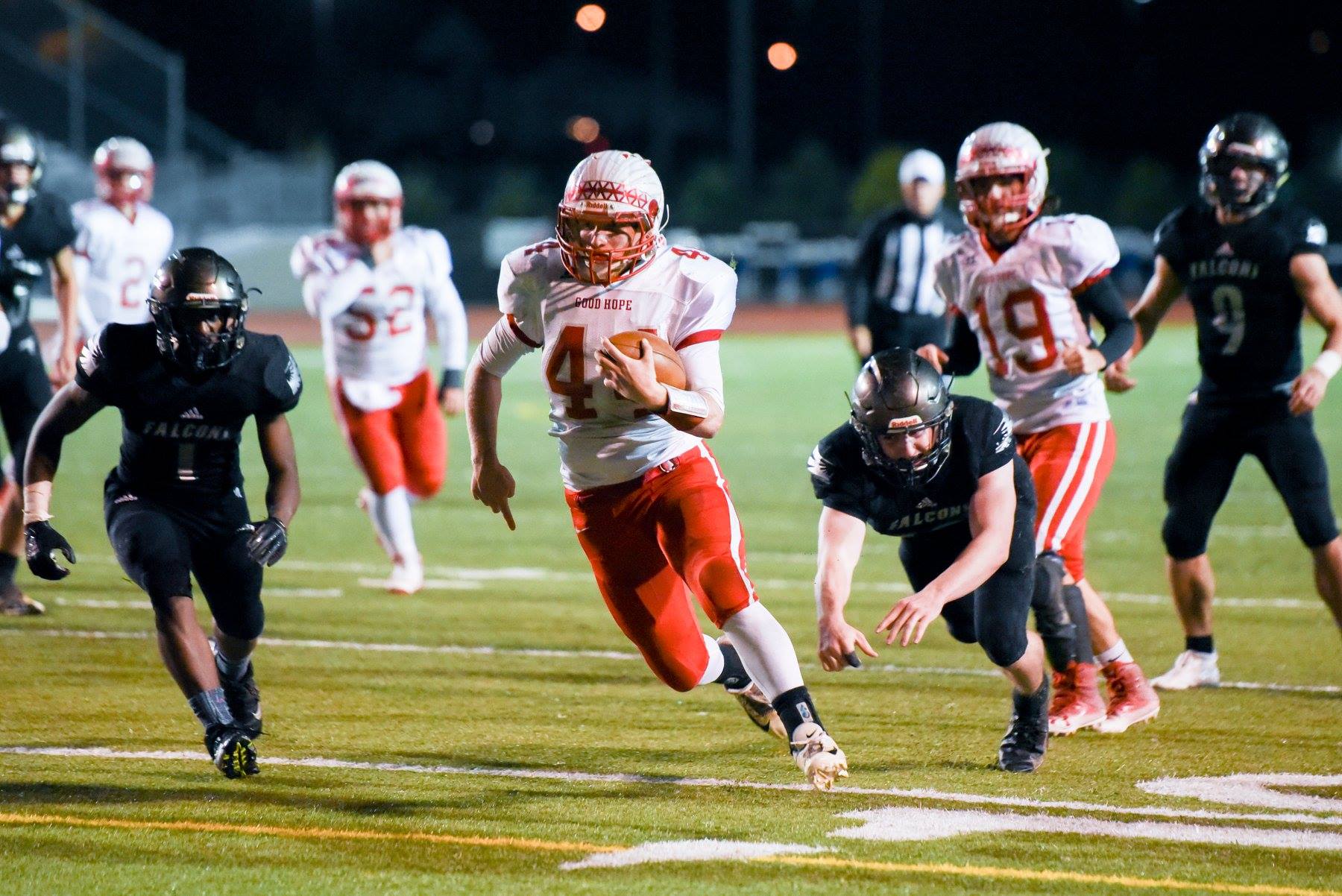 CULLMAN – Round two of this year’s AHSAA State Football Playoffs will be underway Friday night and there are still two local teams in the mix. Both the Good Hope Raiders and Addison Bulldogs will host a playoff matchup this week. The Raiders will host (11-0) Jacksonville and the Bulldogs will host (9-2) Ranburne. Both teams will get a little help from the home crowds, but once you’re this deep into the season, you have to play well every week to advance.

The Golden Eagles of Jacksonville are coming to town this week and they’re bringing an undefeated record with them. Jacksonville is averaging 35 points per game this season and winning by an average margin of 15 points each week. Raiders Head Coach Alan Scott knows this is the biggest challenge his team has faced so far this season.

“They are very well-coached, athletic, they have a great running back, they play well on both lines of scrimmage and their defense really swarms to the football,” Scott said. “Jacksonville’s undefeated and it’s well-deserved.”

Friday’s contest will be the first playoff game that Good Hope has hosted since 2008, though they have not won a playoff game at home since 2006. A win this week would go down as one of the biggest in school history and one of the biggest crowds in school history should be there to help the Raiders pull it off. Scott knows the community is excited, and Friday’s atmosphere is going to be special, but he wants his team’s focus to remain on the field.

“We just have to stay focused on the game,” he said. “There’s obviously a lot of excitement for this game and I know the community is really excited but the key for us will just be staying focused during the game.”

This Raiders’ senior class went a combined 7-23 over the last three seasons, is now holding onto 10 wins, finished the regular season ranked ninth in 4A and is preparing to host a second-round playoff game. Regardless of the outcome Friday night, Scott has already seen this group re-write its legacy at Good Hope.

“Whatever the outcome is, I know who these kids are and what they’ve done,” Scott said. “These seniors’ legacy is still being written after some of the trials they went through in past years. I know what they’ve done so now to go out there and win this game would really be the cherry on top.”

Special note from the Good Hope Raider Quarterback Club: “…We are not going to allow kids to bring in footballs to play with on the hillsides or the sidewalk. If one of these balls were to hit the game field it would be a PENALTY on Good Hope. This happened several years ago, and we did get flagged for it. If someone is caught bringing a ball in at the gates they will be turned around to return the ball to their vehicle. If they manage to get a ball inside the gate then it will be taken up and returned next week.”

The Bulldogs will be back home this week for their second-round matchup and will take on a very talented Ranburne team that finished the regular season ranked 10th in class 2A. Addison is coming off a 56-6 rout of Sulligent and will try to keep the momentum rolling in its direction against one of the best teams the Bulldogs have seen this season.

“They’re very similar to us; the biggest challenge is you’re going to get a team that’s well coached and they’re going to be very disciplined. They play good, sound, physical football so that’s the task to overcome,” Addison Coach David Smothers said. “I think we match up well together; both teams probably match up pretty well and I think it’s going to come down to who gets the ball to bounce their way and who makes the one or two plays in the game. One or two plays can change the outcome of this game.”

Since the Bulldogs lost at Colbert County on Oct. 5, they’ve won four straight in convincing fashion. Smothers credits some of that to strength of their opponents compared to Colbert County but has still seen his group get better each week.

“This is going to be the best football team we’ve played since Colbert County I can promise you that,” Smothers said. “The combined records of the teams we played after them probably isn’t very impressive, however, I do feel like we’re improved and playing better football. I think we’re tackling better and hustling to the ball better.”

Smothers believes that the biggest challenge Ranburne brings to the table is its ability to run the ball. The team is averaging 31 points per game this season and almost all of it is coming on the ground. Smothers talked about his team’s preparation on defense this week and what he believes are the keys to containing Ranburne’s offense.

“They are a running football team. They throw the ball well, but they set up their throws by running it. We’re not going to be able to stop their running game because they’ve got a great run game, but we have to be able to force them into situations that they aren’t comfortable with,” Smothers said. “They have a really good tailback, a really athletic quarterback, an athletic little slot receiver and they get all three of those kids involved in the offense very well. They put so much pressure on you in the run game that when they do throw play-action, they’re going to have one or two running free back there. So, the key is being able to control that running game without having to use the safeties.”

Addison is 5-1 on its home field this season and while Smothers admits that playing at home relieves him of the stress of planning for travel, he doesn’t think it should affect the players. As long as you’re excited to play and play hard, the rest will take care of itself.

“We play pretty well at home and I don’t know if there’s some kind of mojo, I don’t really believe in mojo, but I believe in momentum,” Smothers joked. “I think passion and enthusiasm are our mojo and I think that goes for every team. If you can play with passion and enthusiasm, you’ll have fun and when the kids are having fun, they compete better.”