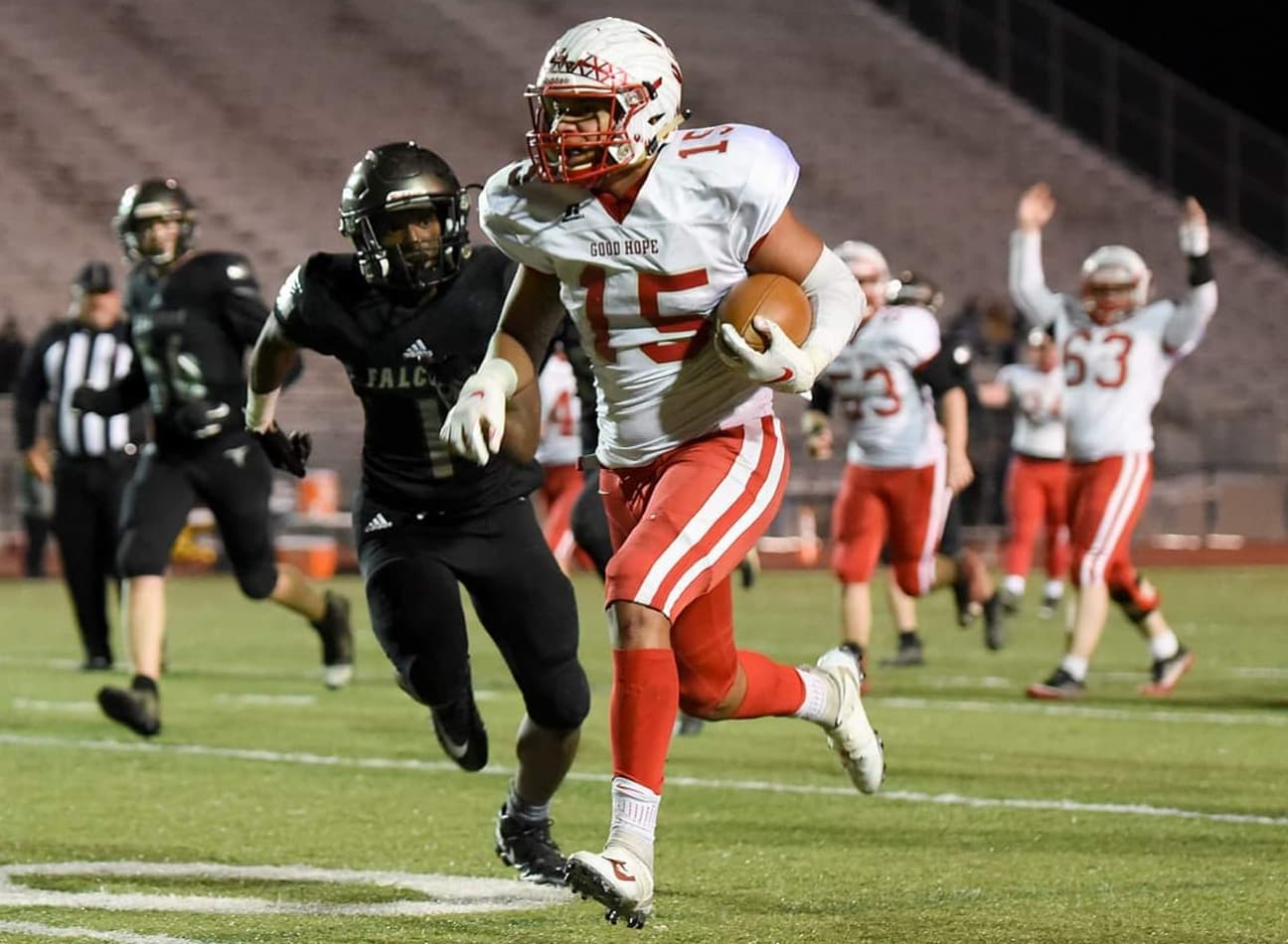 Good Hope's Isaiah Green rips off a big gain on the ground in the Raiders' 62-28 thrashing of St. John Paul II Friday night. (Martha Needham for The Cullman Tribune)

HUNTSVILLE – Good Hope started its Class 4A playoff run with an absolutely dominating win over the St. John Paul II Falcons Friday night, 62-28. The Raider run game was abusive all night long and the defense was mean and nasty. This Raider team was impressive tonight. Very impressive.

The Good Hope defense started the game strong, holding the Falcons to minus-9 yards and allowing the Raider offense to take over. Matt Dixon and Bailey Quick traded carries for a combined 52 yards before Dixon broke for the end zone on a 25-yard touchdown. The Raiders drew first blood on a seven-play, 77-yard scoring drive that put them ahead 7-0.

St. John Paul II was quick to find success with a 31-yard completion down to the Good Hope 40-yard line. Three plays later the Falcons found the scoreboard on a 30-yard touchdown completion topping off the nine-play, 64-yard drive and tying the game at 7 apiece.

The Raider offense stayed with the run and continued to pound the ball, racking up 55 yards on nine plays with runs coming from Dixon, Quick, Colton Bagwell and Isaiah Green. Dixon capped off the drive with an 8-yard score to put the Raiders on top 14-7.

The Falcons hung in there on their next possession to take the ball 60 yards on eight plays to tie the game at 14-all. This would end up being their last score of the half as the Raiders found another gear and started their domination.

Good Hope's next possession was all Dixon as he went 53 yards on three plays to put the Raiders on top 21-14. This would be a repeated scenario throughout the rest of the game as the Falcons could not find a way to control the big guy. He continued to abuse and dismantle the Falcons all night on his way to racking up 262 total yards on 25 carries.

A few punts later, St. John Paul II tried to get something going before halftime, but the Raider defense would have none of that as Tanner Malin ripped the ball out of the air for a 30-yard pick-six. This put the Raiders on top 28-14 and it was all Good Hope for the rest of the game.

The Raider defense stopped the Falcons twice more while the offense added six more points on Dixon and Quick runs with Green taking it 30 yards to the house for the 34-14 lead before halftime. Good Hope ended the first half with 259 yards on the ground with the bulk of that coming from Dixon with 189.

Good Hope received the kick to start the second half and picked up right where it left off. Dixon and Quick combined for 70 yards on seven plays to extend the lead to 41-14. The Raider defense was stifling and clipped the Falcons’ wings on their next possession, forcing a quick punt. The offense tacked on another touchdown with a 27-yard scoring run from Green on the heels of a five-play, 58-yard drive.

The Falcons tried their luck with the passing game and were eventually able to move the ball a little. A couple of Raider defense miscues helped them add a score to the board and cut the lead to 48-21. Their success was very short-lived as the Good Hope offense took the field and quickly went 80-yards with big runs by Dixon and the final 23-yard bull run by Bagwell for the score and the 55-21 lead.

The Raider defense held the Falcons to a quick three-and-out, allowing the offense to make it 62-21 with a one-play, 65-yard, soul-crushing touchdown run by Bagwell. The Good Hope coaches called mercy and took their starters out, allowing the junior varsity to finish the game. St. John Paul II did find the end zone once more to put the final score at 62-28.

This was a very impressive outing for the Raiders. The run game was absolutely unstoppable all night long. The Raiders ended with 531 total yards on the ground. Several Good Hope players had almost career nights. Dixon went 255 yards on 25 carries. Quick ended with nine carries for 89 yards. Bagwell had nine carries for 126 yards and Green finished with three carries for 61 yards.

Good Hope will face (11-0) Jacksonville at home in second round play next week.