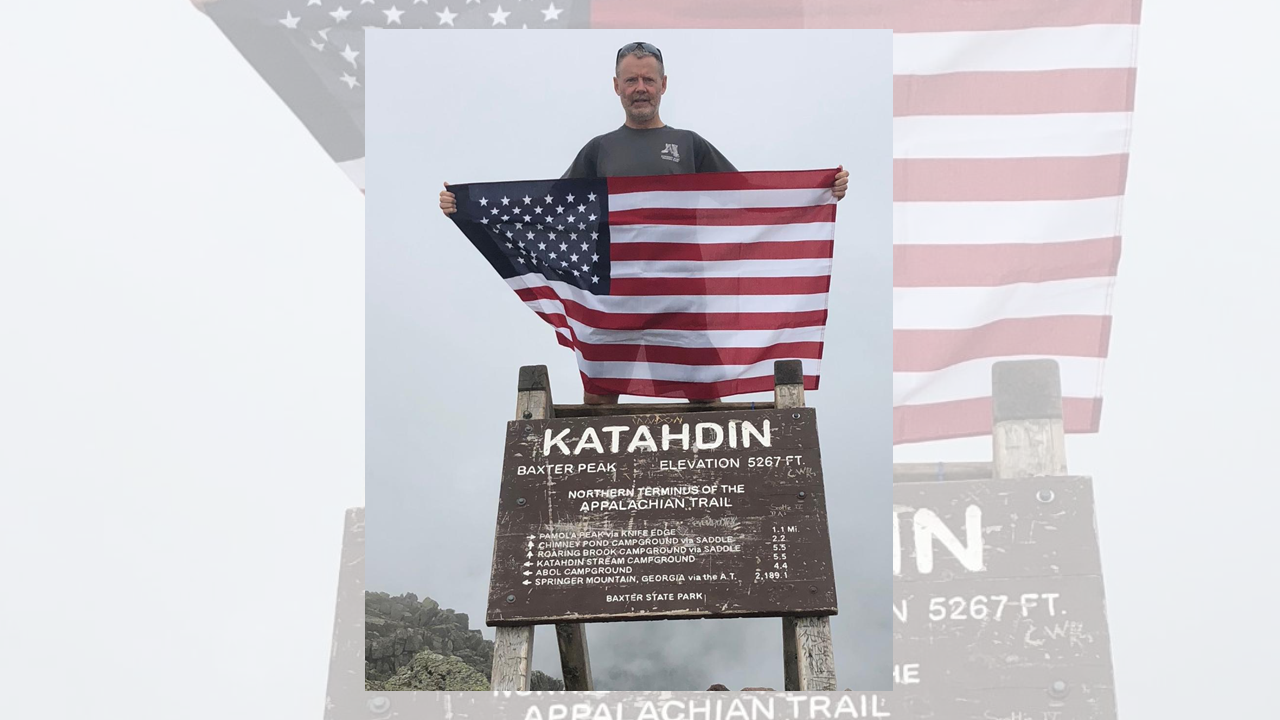 FT. BRAGG, N.C. – In the latter part of October, The Tribune’s W.C. Mann received a simple two-word message from Fairview’s Col. Donald Fallin, who has been hiking the Appalachian Trail since March in support of a scholarship fund for the children of fallen warriors: “Sir…finished!”

Fallin sent a photo of himself at the trail marker atop Mt. Katahdin, the highest peak in Maine, and the northern terminus of the Appalachian Trail.  He actually finished the trail at Bear Mountain in New York State, near where his son is enrolled at the United States Military Academy at West Point.  He got off the trail there in August to participate with his son in a cadet event at the Academy, then traveled to the northern trail terminus at Mt. Katahdin, Maine.  From there, he hiked southward, both in an effort to get ahead of early winter weather on the trail, and to conclude his hike back at Bear Mountain near his son, who had other family members waiting with him to greet the colonel.

At Springer Mountain, Georgia on March 27, Fallin started up the nearly 2,200-mile trail on a mission to raise awareness and money for the Johnny Mac Soldiers Fund, an educational fund for veterans and military families, with a special emphasis on serving the children of soldiers who have given their lives in service to their country.

Fallin established a crowdfunding campaign through GoFundMe subsidiary Crowdrise, with an original goal of raising $5,000 for Johnny Mac.  After large contributor responses, and after gaining the attention of the Gary Sinise Foundation, he was able to push the goal to $15,000.

As of this week, the campaign page was still active and taking contributions at www.crowdrise.com/o/en/campaign/dons-appalachian-trail-hike-for-the-johnny-mac-soldiers-fund/donaldfallin.  Fallin had already passed that goal when he reached the end of the trail, but congratulatory contributions had pushed the total to $16,900 by the early part of this week.  Additional recent attention from media in New England could push that amount higher.

Fallin talked about his decision to do the fundraising hike, and the process of carrying it out:

“I had done a little bit of hiking, just for little weekend kind of trips, and had an interest in it.  It was back in January of this year I met a classmate of mine from West Point who is a huge supporter of the Johnny Mac Soldiers Fund, and he’d been wanting to put together the first ever Johnny Mac Soldiers Fund endurance challenge–which is a long-term event–to do two things: one, to raise awareness for the fund itself, and then two, to certainly support or try to get support through donations to help with the scholarship fund.

“So it all kind of came together when I met my friend Bob back in January, and I thought, ‘Sounds good.’  So I went–I had a little bit of stuff, but then I had to go back and start really putting my planning together, get a list of all the equipment I’d need, and start thinking through how this was going to work because I’d never done a long distance.  I’d never done a hike that even required any re-supply. So, really, I just hit the books and started studying up the maps, and kind of figuring out how it was going to work.

“And then there’s a lot of trial and error, early on.  But, after the first month, you kind of get it sorted out and get in your groove, kind of, and get what they call your ‘trail legs’ underneath you, so it’s not as difficult physically.”

Highlights of the hike

Fallin saw and photographed beautiful sights along the trail, and overcame challenges from rain for days on end to an early New England snowfall in the hike’s closing days, but he said his fondest memories involve the people he met along the way.

He shared, “A lot of people ask me, ‘What did you like the best about the trail?’  They always think it’s going to be a certain section, or a view, or a specific point, or a state or something.  But the key takeaway was just the amazing people you get to meet, both on the trail that are hiking, and both the trail community that’s nearby along the full length of the trail, that just does phenomenal support for hikers that are going north and south.

“So that’s the key takeaway.  And I compare it to being in the military: you get to meet people in the military from all walks of life.  And that was kind of the same experience I noticed on the trail, is that there’s people from all over the country, there’s international folks that are out there.

“And the second key takeaway that was very similar to the military is how everybody works together when you’re on the trail, to help people out.  And it was great to kind of be away from the news and the media and everything for about six months, and you really get to step back and see that, you know, we do have a great country and it’s made up of great people.  And, although things might be a little bit turbulent now, it’s just a snapshot in time; if you look at the values that our country is founded on, and the people that make up the country that carry those values, we absolutely have the best country there is.  And I was just amazed to get to meet all those different people while we were out there.”

On a long Columbus Day weekend, Fallin’s son traveled from West Point to meet him and hike a portion of the trail with him during a particularly rainy stretch of the hike.

Said Fallin, “He’s the one that had been giving me a hard time about the trail, about ‘You know, Dad, it’s just walking,’ or he’d be like, ‘Finish with your backpack or in it.’  So, he drove up and hiked with me for two and a half days in Vermont, those muddy, wet, rainy days. He’s like–we were sitting in the shelter; we were pretty wet and cold–he said, ‘You’ve been doing this for six months, haven’t you?’  Then he said, ‘Hmm.’ I knew what he was thinking. But he didn’t give me a hard time about anything after he went out and did it for a couple of days.”

Fallin told The Tribune, “I do think it was kind of a once in a lifetime opportunity to get out and actually do the entire Appalachian Trail, but the key takeaway was that I had amazing support from the Johnny Mac Soldiers Fund Foundation, from those folks, and then support from my family and all my friends.  I think that’s what gets you going, because the hike in itself–initially, I thought it was going to be primarily a physical event, but, once you kind of get used to the hiking piece and get your systems in place and kind get figured out what you’re doing, it becomes a mental game.

“And, for about the last 1,700 miles, I was hiking solo.  I’d see people every now and then, but probably four to four and a half months running by myself; that’s a whole lot more of a mental game than I thought it was going to be.  And then, probably, just the overall length of the trail–to do the whole thing, try to finish the entire trail in one year was–it’s a big task. Took me just under seven months to finish it.

“But it’s a great opportunity, and I had great support everywhere.  So, that was probably the key takeaway, was the opportunity to work with the great folks at the Johnny Mac Soldiers Fund: to support a great cause and to provide education benefits for children of our fallen veterans, and then the opportunity to take advantage of, I guess what would be considered a natural resource, which is the trail itself.”

Fallin retired at Ft. Bragg, North Carolina, and he and his family are currently working on returning to a location in north Alabama, closer to his hometown Fairview.  He said he has no plans for another long-term project at present but wants to focus on his family for a little while.

Click here for a photo gallery of Col. Fallin's journey.