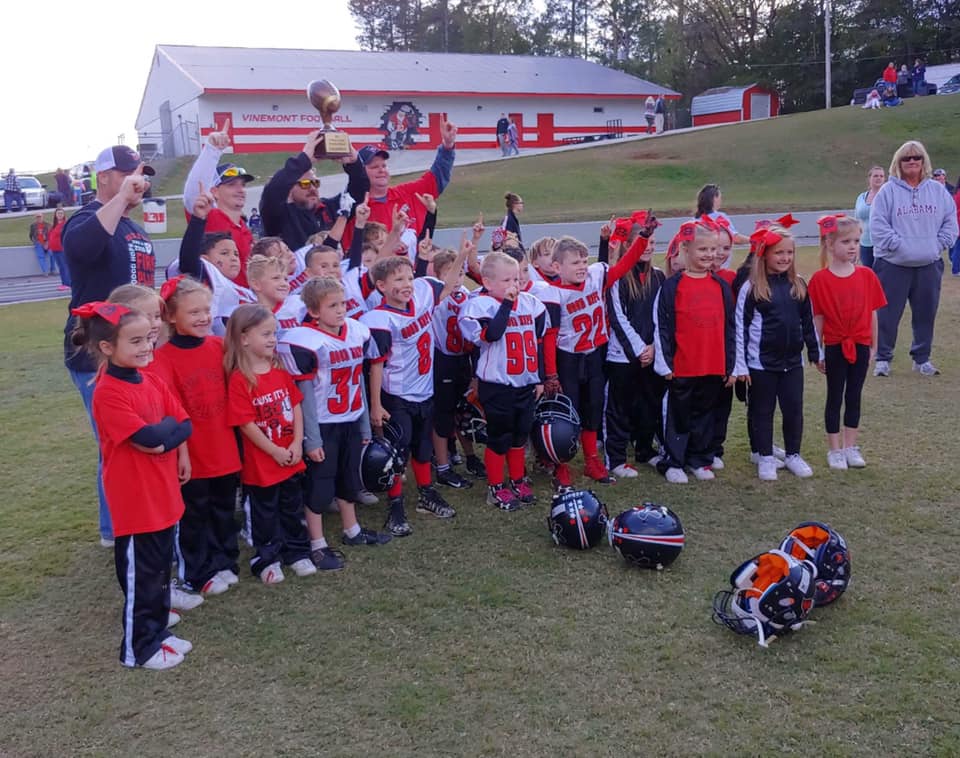 The Good Hope Outlaws celebrate after winning the fireplug championship game on Saturday. (Sammy Confer for The Cullman Tribune)

VINEMONT – There were six games on Cullman County Youth Football championship Saturday, and three teams were crowned champions after the games.

The first game of the day was for third place, as the Cullman Cyclones took on the Good Hope Raiders. The Raiders struck first in the opening quarter when Landon Bagwell scored on a touchdown run to make it 8-0, and the score stayed the same for the first half as both defenses kept the opposing offenses out of the end zone. The third quarter saw the Cyclones tie the game up at 8 on a touchdown run by Cooper Ogstad. He later found Jonah Stallings for a touchdown pass to give them a 14-8 lead; he helped seal third place by picking off an Ayden Black pass and taking it in for the score.

After allowing the opening score of the game, the Cyclone defense completely stiffened as they shut down the Raiders.

The first championship game of the day pitted the West Point Warriors against the Cullman Bearcats, and it was a great defensive effort by both teams. The first quarter saw neither team crack the scoreboard. The Warrior running game started to get it going in the second period as Carter Rutherford found the end zone on a 44-yard run, then Noah Laney added a touchdown of his own to make it a 14-0 West Point lead at the half.

The Bearcat offense looked to find the end zone to start out the second half and did as Cooper Loftin cut the Warrior lead to 14-8 with a 28-yard run, but the Bearcats couldn’t quite get the lead on their final possession and West Point wound up taking home the championship trophy.

The third-place game in the fireplug division saw the Holly Pond Broncos take on the West Point Warriors. The Broncos got off to a very quick start offensively as Hunter Tolbert found the end zone three times in the first half on runs of 65, 7 and 44 yards, giving Holly Pond an 18-0 lead. The Warriors found the end zone on a Tripp Dingler touchdown run to make it an 18-8 game at the half.

West Point made it an 18-14 game in the second half on a Carson Owens touchdown run. But the Broncos extended their lead to 24-14 on another Tolbert touchdown. The Warriors looked for a late rally to take the lead; they cut it to 24-20 on another Owens run. But they couldn’t get any closer and Holly Pond took the third-place win.

The fireplug championship game saw the Good Hope Outlaws take on the Vinemont Eagles. Each team traded touchdowns in the opening few minutes of the game as Kamden Collins scored the opening touchdown for the Outlaws while Carson Arbet found the end zone for the Eagles. Good Hope broke a 6-6 tie on a touchdown run by Bentlee Marlow and the Outlaws took a 12-6 lead going into the half.

Collins and Marlow each added a second touchdown in the second half to stretch the Good Hope lead to 24-6. Vinemont looked to stage a late comeback when Tucker Douglas scored on the quarterback keeper to make it a 24-12 game. But it would be too little, too late and the Outlaws took home the championship trophy.

The third-place game in the wee-wee division pitted the Good Hope Outlaws against the Vinemont Eagles. The first quarter saw both defenses dominate to keep the contest scoreless. Good Hope struck first in the second period on Karson Hollis’ first of two touchdown runs in the period; Parker Johnson added another touchdown for the Outlaws and Joshua Rhodes put up Vinemont’s first score of the game to make it an 18-8 score at the half.

The score still stayed at 18-8 after three going into the final period. The Eagles cut their deficit to just two at 18-16 on another Rhodes run and looked to take the lead on their final possession; the Outlaws, though, had other plans as they forced a turnover on downs to clinch third place.

The final game of the night was the wee-wee championship game between the Cullman Cyclones and the Cullman Bearcats. It was all Cyclones from the get-go, and they got their first points by tackling the Bearcat runner in the end zone for a safety. Landon Pitts threw two straight touchdown passes, one to Brody Vincent, and the other to Collin Nelson to make it an 18-0 Cyclone lead at the half.

Weston Keel scored a pair of touchdowns in the third period and Keaton Leathers added another one in the final period to put the final score at 38-0 as the Cyclones ended up hoisting the championship trophy at the end of the game.

‘Surround yourself with the right people’: Tanner Kilgo recaps his Cold Springs career