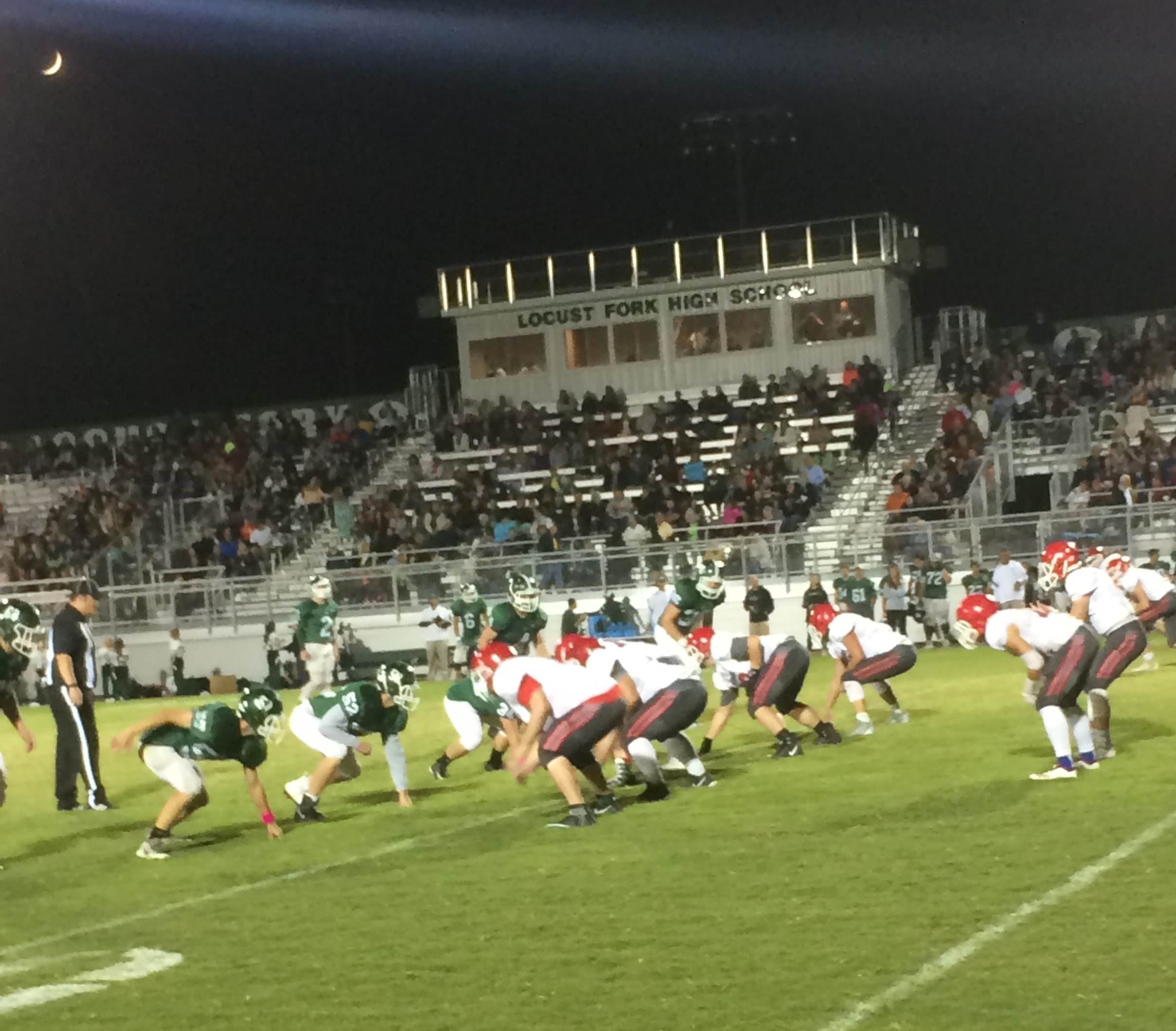 The Vinemont Eagles came up short on the road in Locust Fork Friday night. (Ryan Guthery for The Cullman Tribune)

LOCUST FORK – It was homecoming for the Locust Fork Hornets as they welcomed the Vinemont Eagles for a regional showdown. The Hornets came away with a 38-32 victory in a long, close game that contained a number of missed holding and personal foul calls depending on which team you were rooting for.

The Hornets got the ball first and took nearly the entire first quarter before they punched it in from 6-yards out putting the Hornets up 6-0 with only 3:39 left in the opening quarter. Vinemont would quickly have to punt the ball back to the Hornets, who went on another long drive but had to settle for a field goal, after getting inside the 5-yard line, extending the lead to 9-0 with 7:24 left before halftime. On the ensuing possession the Eagles struck quickly on a 74-yard run by Dustin Moore to cut into the Hornets’ lead, making the score 9-6 with exactly 7:00 until halftime. Neither team was able to score again leaving the halftime score at Hornets 9, Eagles 6.

The Eagles came out of the locker room fired up and started the third quarter strong. Eagles running back Dallin Dinkle scored on a 62-yard run to quickly give the Eagles their first lead, 14-9, with 11:36 remaining in the quarter. The Eagle defense pitched in as Moore picked up a fumble on the very next Hornet drive and went 33 yards for a touchdown, putting the Eagles up 20-9 with 9:31 left in the third. Momentum was clearly on the Eagle sideline as a muffed kick-off was recovered by Moore. Three plays later, Moore capitalized with an 11-yard run to push the lead to 26-9 with 8:29 still left in the quarter.

The Hornets put an end to the huge momentum swing with an 18-yard touchdown pass cutting the Eagle lead to 26-16. On the ensuing possession the Eagles would turn the ball over, but their defense was able to rise up and force a punt. The Hornets got the ball back after an Eagle punt, and this time they capitalized with a 29-yard touchdown pass cutting into the lead, 26-23, with 10:07 remaining in the game.

A pick-six gave the Hornets a 30-26 lead with 8:52 left in the game. About two minutes later, Dinkle gave the Eagles the lead back on a 4-yard run that made it 32-30 with 6:14 on the clock. Vinemont’s defense stepped up to force a punt putting the ball back in the hands of the offense with the score and the clock on the Eagles’ side. Disaster came by way of a fumble, giving the Hornets life, and five plays later a 1-yard touchdown gave the Hornets a late 38-32 fourth-quarter lead.

Vinemont got the ball with one last chance and about a minute and a half to win the game. Two long plays set the Eagles up with a first-and-10 inside the 30-yard line, but a holding call and a pass completed short of the end zone saw the Hornets come away with a tight 38-32 victory in a game in which neither sideline appeared to enjoy the officiating.

Vinemont drops to 2-5 on the year with the loss and 1-3 in Region 5 with another big game at home next week against the J.B. Pennington Tigers.