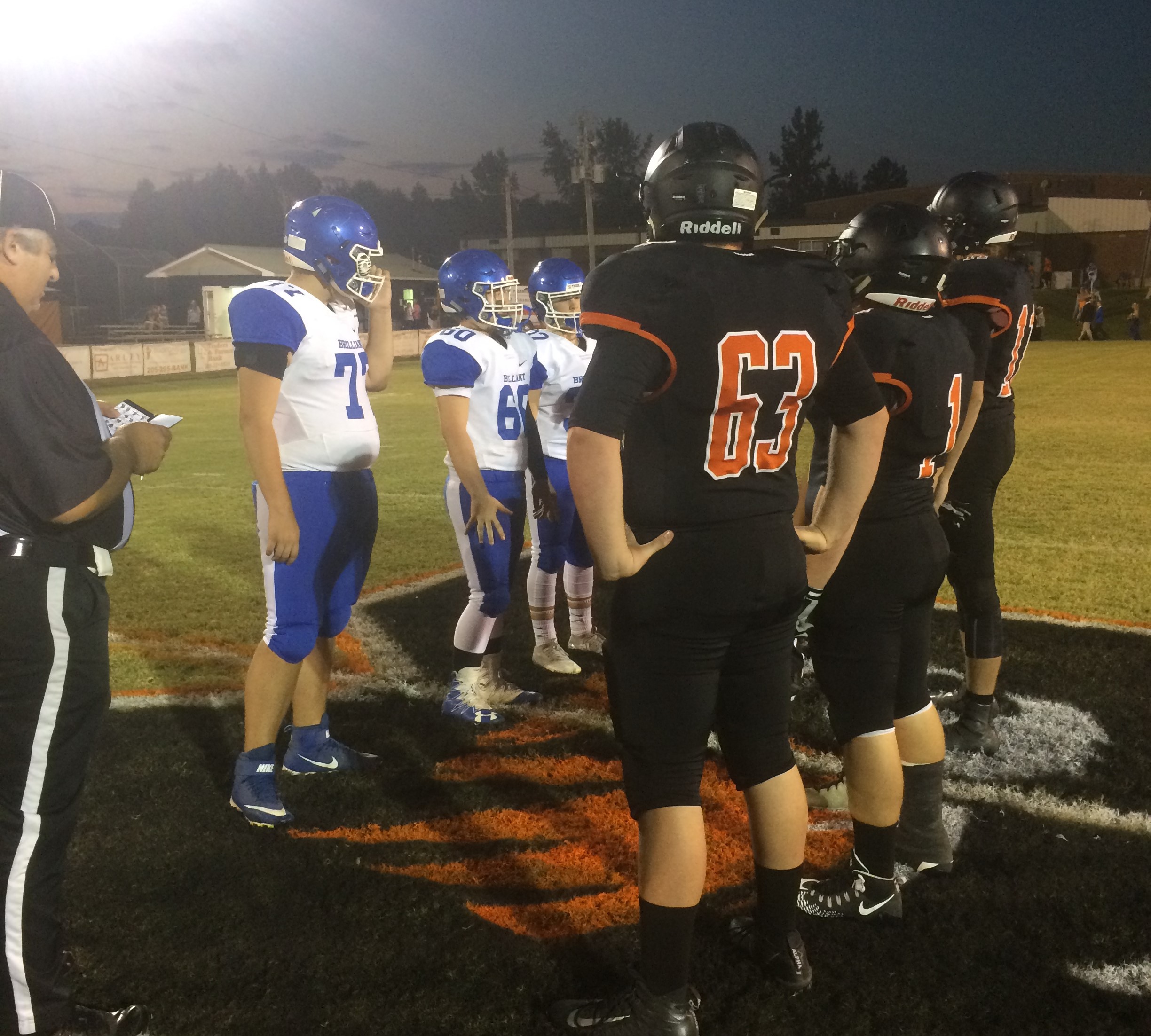 Bradley Vickery (63) and Meek teammates line up for the coin toss before their 36-14 victory over the Brilliant Tigers. (Ryan Guthery for The Cullman Tribune)

ARLEY – It was a battle of the Tigers as Meek hosted Brilliant Friday night, but it was Meek that was victorious, 36-14, in front of a homecoming crowd.

On the first possession of the game it was the Black and Orange Tigers with the ball, but on third down they threw an interception. Three plays later, Gabe Jones put Meek on the scoreboard thanks to a pick-six giving Meek an early 8-0 lead. The Meek defense forced a three-and-out giving the ball back to its offense with good field position. Five plays later, Nelson Martin scored from 28 yards out putting the Meek Tigers up 16-0 with 3:52 remaining in the opening quarter.

On the ensuing possession, Brilliant drove the ball down and was set up first-and-goal after a huge pickup through the air on fourth down. However, after a penalty that set the Blue and White Tigers behind the chains, they were faced with a fourth-and-goal, and the Meek defense stepped up to force a turnover. After a big third-down pickup through the air, Jones went 43 yards to put Meek up 22-0 with 7:18 left before halftime. After the Meek defense forced a turnover on downs, the offense put another touchdown on the board thanks to a 12-yard pass from Stuart Waldrep to Caleb Aaron to extend the lead to 30-0 with just 1:30 until halftime.

It wasn’t until very late in the third quarter that Brilliant, thanks to a conversion on third-and-20, found the end zone on a 22-yard pass, cutting the Meek lead to 30-8 with 1:25 remaining in the third quarter. On the next Meek possession, an interception gave the ball back to the Brilliant offense, which took full advantage after a fourth-down conversion, scoring on a 37-yard pass to once again cut into the lead, 30-14, with 5:06 remaining in the game.

Looking to put the nail in the coffin, the Meek offense got the ball after an attempted onside kick, and several plays later Jones went 37 yards, putting the game out of reach and securing a homecoming victory as the home Tigers stretched the lead to 36-14 with 3:30 remaining in the game. Meek was able to keep Brilliant out of the end zone for the final 3:30 to cap of an impressive defensive performance.

Meek (3-4, 1-3) will be back on the road next week as the Tigers head to Pickens County for an important 1A, Region 6 matchup as the regular season starts to wind down.