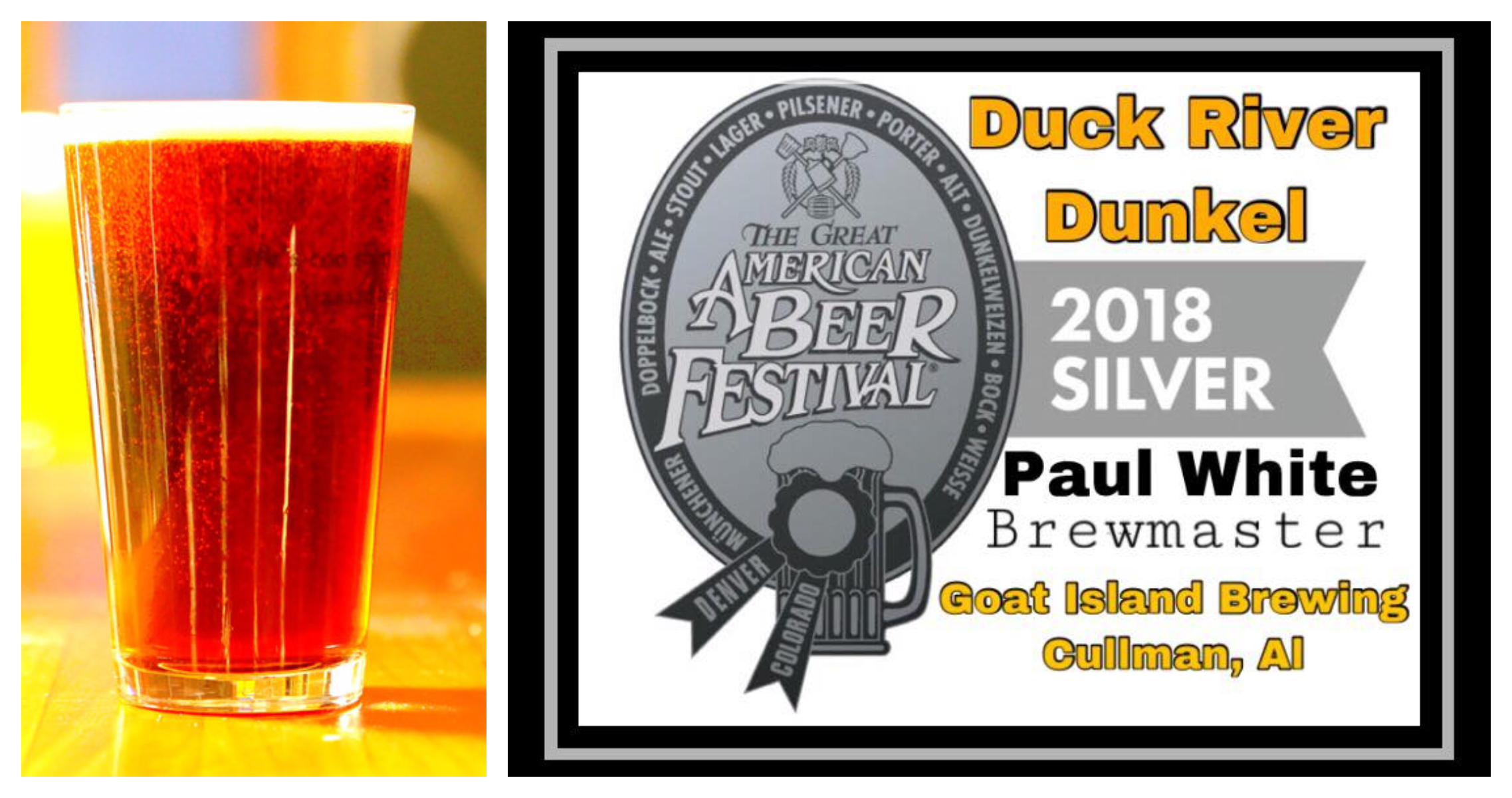 CULLMAN – Over the past weekend, Cullman’s Goat Island Brewing, which has won numerous state awards for its various beers, gained national attention with a second-place silver medal finish in the “Munich-Style Dunkel or European-Style Dark Lager” category at the Great American Beer Festival in Denver, Colorado, the largest beer competition in the United States.  And to make the achievement even cooler for local folks, the award-winning beer happens to be this year’s official Cullman Oktoberfest brew: Duck River Dunkel.

Brewmaster Paul White sent four beers but did not attend the festival.  After receiving the news of the award, he told The Tribune, “I’ve known guys that have entered into this thing their entire careers, you know, 10 years or better, and never gotten anything.  So I figured, ‘Well, I’m just going to submit it just to get experience on sending beer to this competition, because it’s one of the harder ones to get into.  And, ironically enough, we won one.  I kind of wish I would’ve went, now!”

White added, “For us, everybody here, it was really exciting to be recognized on a national level, because we try to do–we’re meticulous here with our craft, almost to a fault.  We’ve entered in a lot of stuff, but this definitely is the highlight of the awards we’ve won.  We’ve won plenty on the state level, but national is, for us, it’s a really big deal.  And exciting that we can finally put Cullman on the map, as far as making good beer goes.”

Goat Island CEO Mike Mullaney said that, prior to its entry in the Great American Beer Festival, Duck River Dunkel was chosen as the official beer for the 2018 Cullman Oktoberfest.  White went one step further, adding that the samples sent to the competition were drawn from the very same batch that he recently brewed up just for this year’s local fest.

For beer fans, that means if you raise a stein of Duck River Dunkel at Oktoberfest this year, you won’t just be getting an award-winning brand of beer; you’ll literally be drinking the very beer that won the award!

Mullaney told us about the honor, “It’s a pretty big deal.  It’s the biggest award we’ve ever won, because it’s a nationwide honor.

“I will say that we knew that (Duck River Dunkel) was good, because we had gone down to Mobile and won a contest earlier, a beer festival.  And that got tied for best of show at another festival, so we knew we were onto something.  But to have it place second at a national competition, which is kind of THE national: the Great American Beer Festival is the big United States brewing festival, to have it get a second place in that is like a dream come true.”

The Goat Island website describes the Duck River Dunkel: “This smooth, dark Bavarian style lager is all about the malts. It has a medium body and bready malt backbone but finishes dry. Delicious malty goodness!”