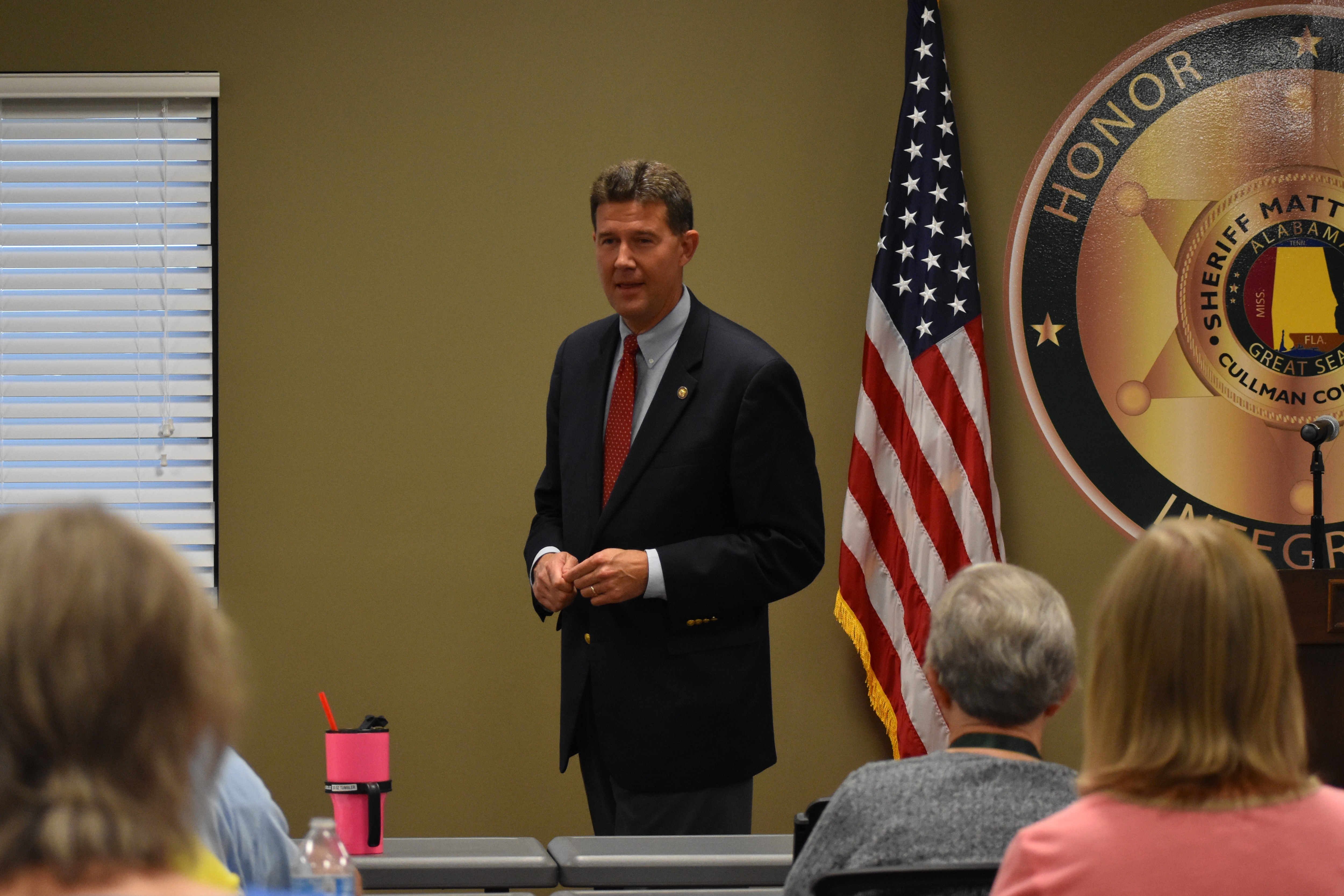 CULLMAN – On Tuesday evening, while addressing the Cullman County Sheriff’s Office (CCSO) Citizens’ Academy, Alabama Sec. of State John Merrill took time to talk to the class about incursions into the state’s election system by Russian hackers during the 2016 election, assuring students that America’s votes, including those from Alabama, were safe then and safe now.

Acknowledging that Alabama’s was one of 21 state systems approached by the hackers, Merrill told the class, “If you voted for Secretary (Hillary) Clinton, your vote counted for Secretary Clinton.  If you voted for the president (Donald Trump), no matter what state you were in, your vote counted for the president in every state of the Union. Twenty-one states were scanned, probed by the Russians in that exercise in 2016.  We were one of those. Our systems were not compromised, our systems were not penetrated, and we have no vulnerabilities that have been exposed–zero.

Merrill continued, “And the way that these people are influencing our system primarily is through social media: Facebook, Twitter, Instagram, all those things.  You need to know that, and you need to be diligent in that response.

Merrill claims the U.S. Senate race between Democrat Doug Jones and Republican Roy Moore was the impetus for changes in the way Facebook political ads are placed.

“Because of what we went through with Doug Jones and Roy Moore, Facebook changed what they’re doing now when people try to place political ads on Facebook.  We’re the reason that they do that now. Now, if you try to place an ad on Facebook, you have to get a postcard mailed to your home. You have to respond to that before they’ll ever take your money, and you have to be in the United States to get that done.  That all happened because of us, and because of a meeting that we had with them in Washington after that campaign took place.

“I have received security briefings from Homeland Security Secretary Kirstjen Nielsen two times this year.  I have top secret security clearance now that I’m serving as your secretary of state. We met in Washington in February, in her office, and then we met at Philadelphia in July.  And I can assure you that they’re doing everything that they can possibly do to protect us, and they’re working with us as one of our public partners to make sure that everything that needs to take place is taking place to protect your interests and your information.”

During a break in the class, Merrill told The Tribune, “It’s so very important to make sure that we are diligent in protecting the integrity and the credibility of the process.  Our people need to know that they have their confidence in the system for a good reason, because what we have in place is protected.

“People know that, if they vote for a certain candidate, their vote is going to be counted for that candidate in this election cycle, because we want everybody to vote–but just one time!  We want to make it easy to vote and hard to cheat.”

Merrill reported that voter registration is at its highest level in Alabama history, and the Alabama Secretary of State’s Office wants to see even more voters registered in time for this fall’s elections.  It offers online registration, and voters can download a smart device app. Members of the office come to certain community events around the state to register voters and issue photo IDs and can send a representative to someone’s home if there’s no other way for that person to get an ID and register.