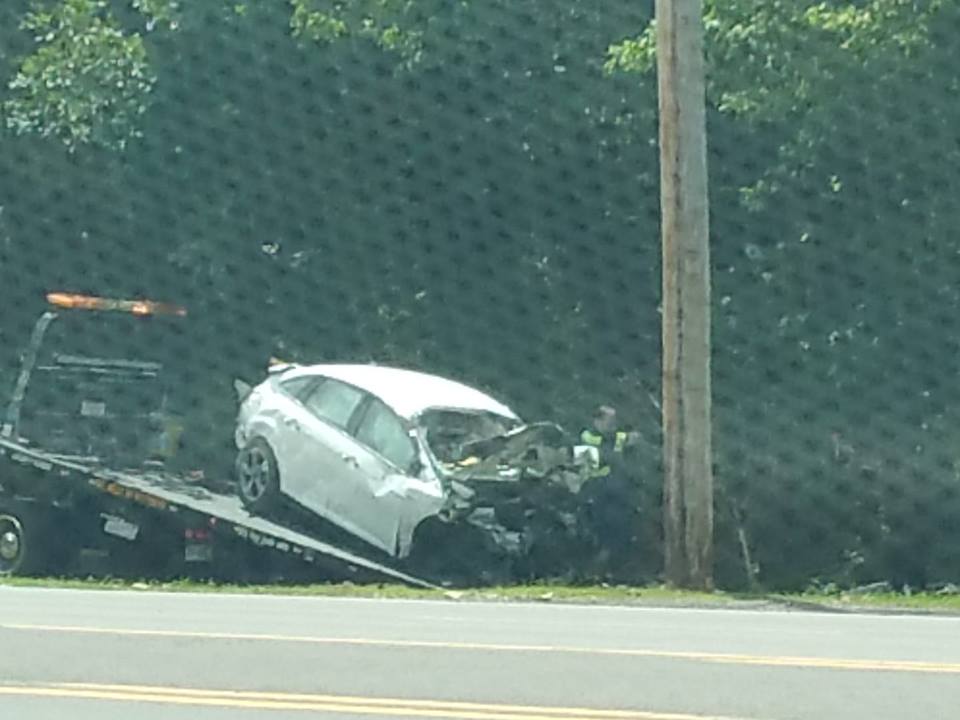 Brandon Osborne led multiple law enforcement agencies on a high-speed chase on Monday, ending when he crashed into a utility pole in Hanceville. (Photo courtesy of John Anthony Leonardi)

CULLMAN – The man who led multiple law enforcement agencies on a high-speed chase down U.S. Highway 31 Monday has been identified as Brandon Osborne, 24, of Danville. The chase began in downtown Falkville and ended when Osborne crashed in Hanceville. He was transported by helicopter to Huntsville Hospital with non-life-threatening injuries.

Falkville Police Capt. Aaron Burgess said Tuesday, “Myself and another officer on duty were dispatched to a hit and run on Highway 31 southbound. The caller, the passenger in the vehicle that was hit, said a car (Osborne’s) bumped them and kept going. The caller stated they were following him (Osborne) because he was not stopping. As they were traveling on Highway 31, the offender came to an abrupt stop, exited the vehicle, went to the back of the vehicle and the caller said the offender was drawing a pistol and pointing it in the complainant’s direction.”

Burgess said Osborne forgot to put his car in park, and it started rolling, so Osborne jumped back in his car and took off.

Burgess said he and his fellow officer, Officer William Riley, told dispatch to advise Cullman County that the offender was heading into Cullman. They lost sight of Osborne and Burgess backtracked to make sure the original complainants were safe.

Meanwhile, Riley proceeded into Cullman, where, Burgess said, “Another individual that was stopped in the middle of 31 was waving at Officer Riley saying that this guy (Osborne) is pointing a gun at me. Apparently he had got out of the vehicle again in a road rage with someone else, in Cullman.”

When Officer Riley pulled up, Osborne took off.

Burgess said, according to a report from the Cullman County Sheriff’s Office, “The vehicle was traveling in the left-hand lane, Osborne came flying up, and they tried to get over. The couple said he pulled a gun on them, they somehow came to stop, and he was pointing a gun on them again.”

Osborne kept going, eventually making it down Highway 31 in Hanceville, where he crashed into a utility pole, breaking it in half. Burgess estimated Osborne’s speed was between 80 and 100 miles per hour at the time of impact.

“I can’t believe he made it (survived the crash),” he said.

The car Osborne was driving, a 2017 white Ford Focus, had a switched tag, but the registration came back to Osborne’s family members, according to Burgess.

Burgess praised the work of all the law enforcement agencies involved, saying, “The cohesiveness of each unit, whether it be us, Cullman County, Cullman City, then Hanceville and the State Troopers, everybody did a great job interchanging in jurisdictions because of the fact that, you know your backyard better than we do. We’re not going to lead that, and that’s our policy. When another agency gets involved, we’re going to back off.”

As to Osborne’s condition, Burgess said he is awake, alert and talking, with non-life-threatening injuries. It is unknown whether Osborne has been discharged from Huntsville Hospital at this time.

Burgess said he doesn’t know yet what Osborne will be charged with. He said Osborne has a criminal record, and that will be looked at with Morgan County District Attorney Scott Anderson. Possible charges could include felon in possession of a firearm, menacing and leaving the scene of an accident. Osborne could also face criminal charges in Cullman County.

“He did have a small amount of marijuana on his person,” said Burgess. “The gun he had was a 40 caliber Ruger semi automatic. It was loaded.”