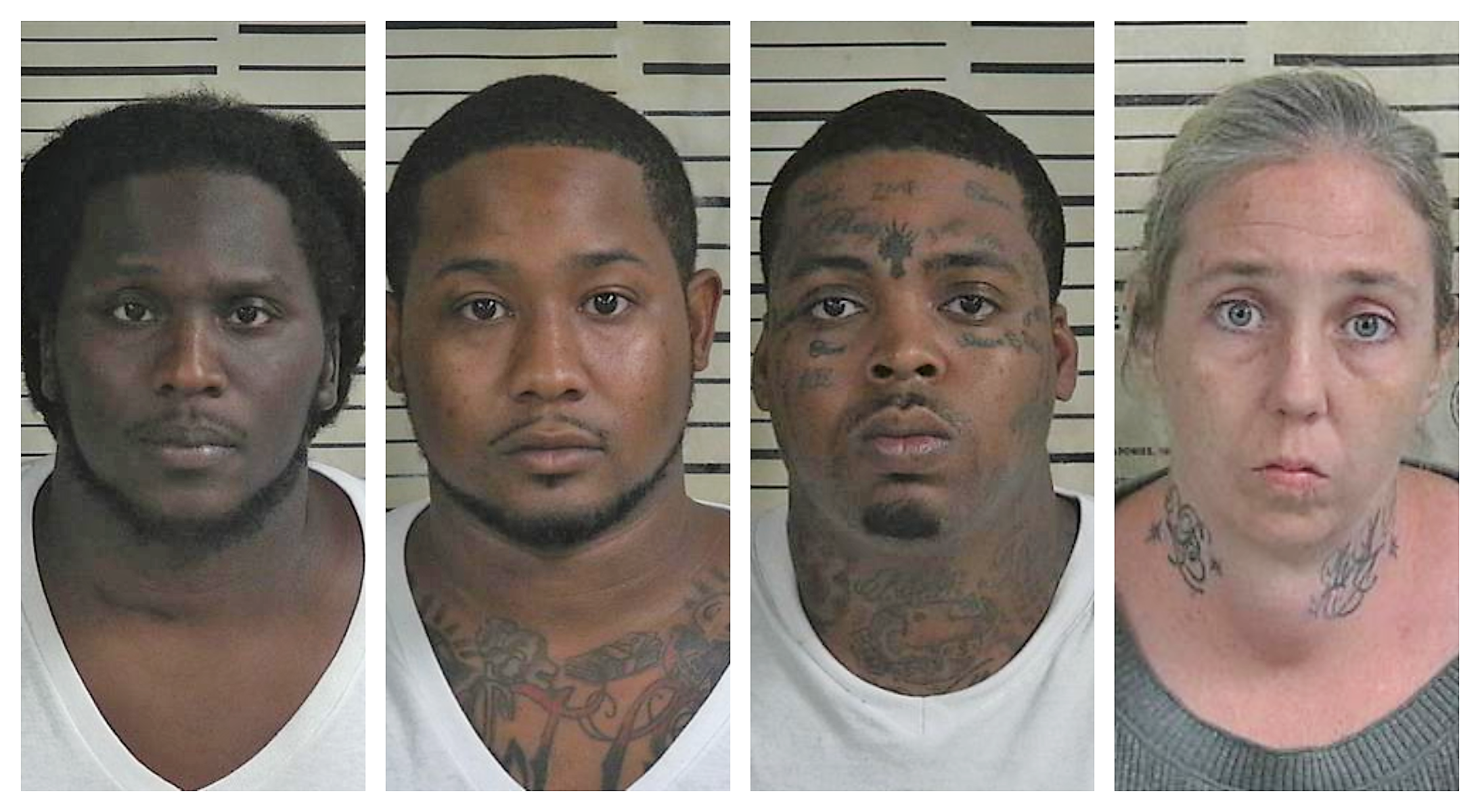 CULLMAN – On Tuesday, good old-fashioned boots-on-the-ground police work by a team of officers and investigators put an end to a crime spree that extended far beyond Cullman, taking four suspects into custody and recovering a substantial amount of stolen property and money in the process.

According to Cullman Police Department (CPD) Capt. Becky Boyd, at 11:36 a.m. Tuesday morning, dispatchers received a call and patrol officers responded to a call about three vehicles that had been broken into at the Cullman Wellness and Aquatic Center.  Officers Jeff Mize and Adam Walker talked to victims and took the extra step of reviewing video footage from the Aquatic Center to get a detailed description of the suspects’ vehicle. A “be on the lookout” (BOLO) alert was immediately sent out to all officers on duty.

Over the next 45 minutes, the victims began to get notifications from their banks about use of their credit and debit cards at various local stores, including both Wal-Marts, the north Walgreens, a Dollar General and others.  They relayed this information to the CPD which sent officers to the stores. Officer Shannon Cheatwood received from the loss prevention officer at the north Wal-Mart additional video which allowed more details about the car, along with four suspects’ descriptions, to be added to the BOLO at 12:13 p.m.

At 12:21 p.m., Patrol Capt. J.P. White and Investigator Max Bartlett were searching on Cherokee Avenue when White spotted the car parked beside GameStop.  As they turned around to return to the store, a person matching one suspect’s physical and clothing description got out of the car and entered the store. There, they and other officers took that suspect and two others in the car into custody.  A search of the car turned up stolen items and marijuana. The fourth suspect was picked up at another store by Sgt. Todd Craig a short time later.

All four suspects are currently being held in the Cullman County Detention Center.

The investigation is ongoing and could result in additional charges for all four.

The four appear to have been traveling up I-65 and got off at several places aside from Cullman along the way.  The CPD is working with agencies in other cities and states to investigate the full scope of what this ring has been up to.

Stolen items included purses, cash, credit and debit cards, phones and other items.  The suspects are alleged to have used stolen credit and debit cards to purchase numerous gift cards found among evidence in the car and on suspects, in order to get as much spendable money in hand as possible before victims had time to deactivate cards and freeze accounts.

“But they still know there’s another person, a suspect, because of the job Officer Cheatwood did at Wal-Mart of getting all those facts together.  And so they were all located and detained, and charges are pending.”

CPD Investigator Sgt. Intae Suh added, “They’ve been arrested for some stuff, but we’ve got additional charges pending, once we get all that stuff and finish investigating what businesses they hit up, and what cards they used, and so forth from that point on.”

Police warned that interstate cities like Cullman are common targets for organized theft rings like this one.  Once off the highway, according to Suh, they use online searches to locate places like gyms and the Aquatic Center, where people routinely leave purses and other items in their cars and go to those places.

“Why they target gyms,” said Suh, “(is because) most people who are there, they’re going to be working out for an hour, so they’re not going to know anything while they’re working out.  That gives them time to go do what they’re going to do. By the time you get to the car and realize your window’s been busted out, it could have been an hour and a half while you were at the gym, while they were going and doing that stuff.”

The suspects in this case used punches to break windows, but in most cases around Cullman, thieves have an easier time when victims leave their cars unlocked with valuables in plain sight.

This type of crime can be highly organized and sophisticated, with rings traveling interstates full-time, “earning their living” by getting off the highway, hitting a few targets of opportunity, grabbing cash and valuables, rapidly converting freezable and trackable credit and debit cards into gift cards, then getting out of town as quickly as possible.

Boyd said, “This is the third time that I can think of right off the top of my head that we’ve been hit by this (type of crime) this year in this area, and probably more.  When you leave your valuables laying in plain sight, especially in these Wal-Marts- that’s just a common area- but the Aquatic Center, things like that, anywhere like that, it just makes it easy.”

In a conference meeting that included White and Suh, Boyd told The Tribune, “I think we would agree: we want to commend our officers that did this.  They did a good job and they work hard. And this was a good arrest, and it happened because the first officers there took the initiative to go a little bit further than just taking a report.  They didn’t just take a report; they took the report and then followed up on the report, got that information.

White added, “A lot of times on day shift, we get strung out different places, but I would say yesterday, that was the best organized department effort that we’ve had in a long time, because it just flowed.”

Boyd concluded, “I want to commend all the officers involved.  And I’ve thrown a few names out to you; there were more people involved, obviously.  From my standpoint, I thank the patrol officers and my investigators because they did a good job.”