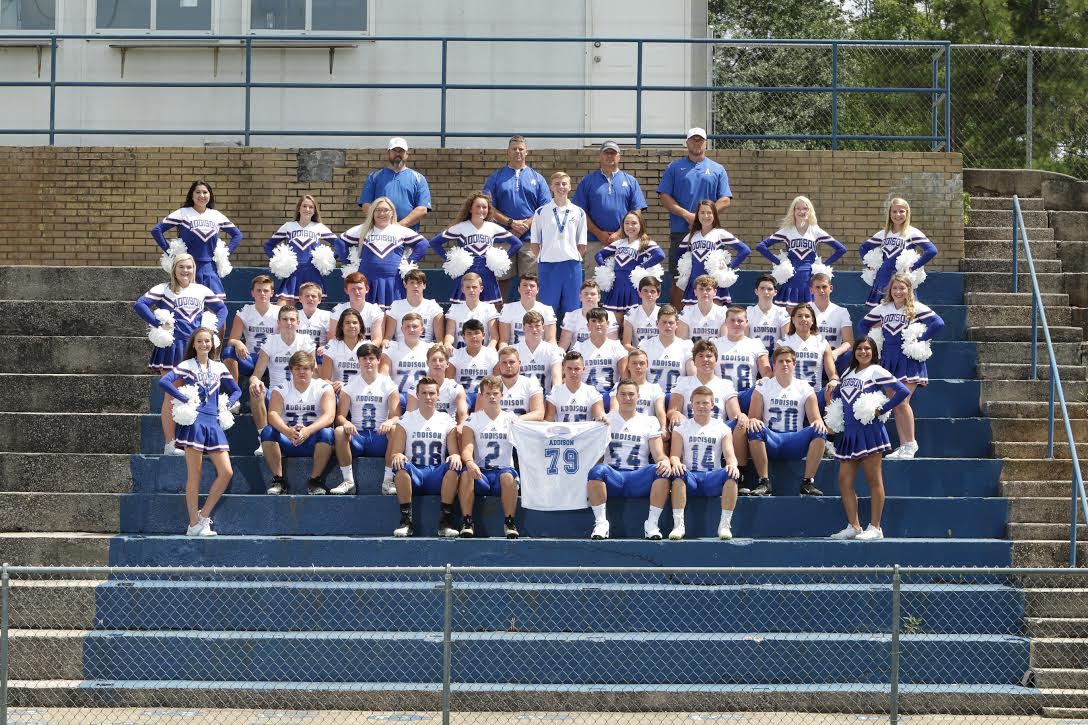 ADDISON – Football is back, and in Addison and that means it’s time for blue and gold crowds to fill A.G. Hicks Stadium and gear up for a potential playoff run. The Bulldogs fought their way into the third round last season and came up just one game short of a trip to the State Championship in 2016 so they’re hungry for a chance to take that next step in 2018.

David Smothers is entering his seventh season as the head coach of the Bulldogs and a playoff standard has been set during his tenure. One of the new things that Addison will deal with this season is a shake up to the schedule. There are a few teams on the calendar this year that Addison hasn’t faced in a long time, and Smothers is excited to see the new competition.

Senior linebacker Gage Gilliland knows that the road is a little harder this year for him and his team, but he’s excited to see what they can do this fall after working together throughout the offseason.

“We’ve just been looking to come closer as a team and get better together,” Gilliland said. “The schedule is going to be a little tougher this year, but I think we’ll be able to do really well if we just take it one game at a time and stay focused. We’ve been working hard all summer and we’re just looking forward to it.”

Gilliland is one of just four seniors that’ll be on the field and in the locker room for the Bulldogs this season, and he hopes that so far, he and his classmates have done a good job in that leadership role.

“I think we’ve helped them a lot,” Gilliland said. “We don’t have many seniors on the team this year, we’re a young team, but I think over past times they’ve helped us a bunch and I hope that we have, too.”

Even though Addison will have a small number of seniors on the roster this season, they won’t be short on talent. All State First Teamer Zayne Guthrie will be returning to his quarterback spot this fall and the Bulldogs will look to him to duplicate the type of season he had as a junior. In front of him, All State Second Team selection Hayden Ray will be returning for his senior season, and like Guthrie, Ray will be expected to help move the ball once again this year. Along with Ray and Guthrie, Matthew Harris is another All State player returning to the Bulldog offense.

Those three will be huge for Addison on the offensive side of the ball this season after losing last year’s leading rushers to graduation. The backfield is definitely a priority for Smothers and his staff this fall, but outside of that, the Bulldogs should have a lot of familiar faces on the field.

“Position-wise, the biggest unknown for us is going to be at our tailback spot. The two kids that have handled that for us both graduated last year and that was Ben Robinson and Tyler Borden. They were a big part of our offense so that’s the biggest question mark for us,” Smothers said. “All the other spots have kids returning or the kid that is there played a significant role at that spot last year. So, the biggest spot on offense is definitely tailback, and then on defense it’s probably going to be at corner.”

Addison has made the playoffs every year since Smothers took over as head coach in 2011, including some deep runs in the past two seasons, so it can be tough for coaches not to look ahead, but the goal hasn’t changed for Smothers: just win the next game.

“The goals are always the same for us. Deep down we all dream about getting down there and playing for a championship, but we realize you’ve got to take it one game at a time,” Smothers said. “Right now, our number one goal is to be 1-0 after the first week and then just pray for health throughout the year and be competitive. We want to play hard and play competitive and make the people here in Addison proud.”