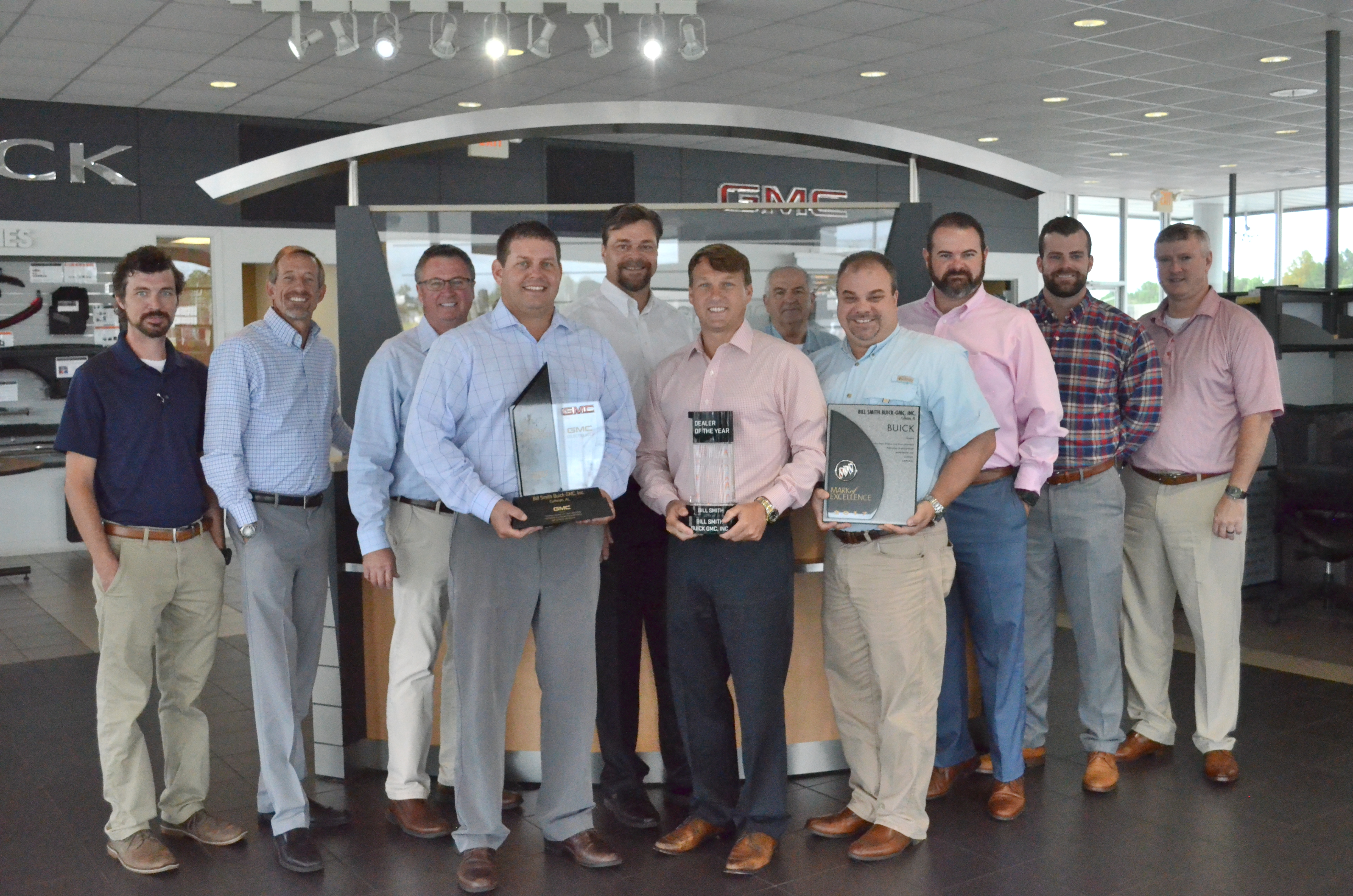 Bill Smith Buick GMC General Manager Andy Cole, center, and his staff pose with their 2017 Dealership of the Year Award.

CULLMAN – Local automobile dealership Bill Smith Buick GMC was honored recently with a 2017 Dealership of the Year Award from General Motors. The award is only given to a handful of dealers each year and is one of the highest honors a GM dealership can receive.

Bill Smith Buick GMC General Manager Andy Cole is excited and honored to see the dealership bring home the award and said he owes it all to his staff.

“Seven dealers in the nation got this award and to be one of seven in the nation is exciting. It was a lot of hard work, it takes great sales people and it’s the biggest honor you can get in the Southeast and we’re just tickled,” Cole said. “We’ve got the best managers in the world, but it also takes great sales people, it takes a good service department, it takes a good office staff and you have to have a good owner that takes care of their employees.”

Cole also credits that owner, Bill Smith, with establishing the work environment that led to this honor.

“What Bill has instilled in us, is to take care of the customer. I’m 43 and I’ve worked here since I was 18, and the whole time he’s told me, ‘If you take care of the customer, they’ll come back.’ It’s just a huge honor and the team we have now, I just can’t brag on them enough,” Cole smiled. “I’m just proud of everybody. It’s like a family here; it’s not just a business. It’s an honor to receive this award and it’s an honor to work here, really.”

“We can’t thank Cullman enough. A small dealer like us shouldn’t do this, you know. We sell over 200 a month every month and most big city dealers don’t do that; it’s Cullman,” Cole said. “The repeat business we have and the brand loyal folks that we have, that’s what makes us successful. We sell some out of town, but 90 percent of it comes from people here in Cullman and that’s what we like. Anytime we can help someone from Cullman we do it. They’re just good folks and that’s why Bill has been in business since 1956. He wants to take care of the people here first.”

Bill Smith Buick GMC is located at 1940 Second Ave. NW next to the intersection of U.S. Highway 31 and Alabama Highway 157.