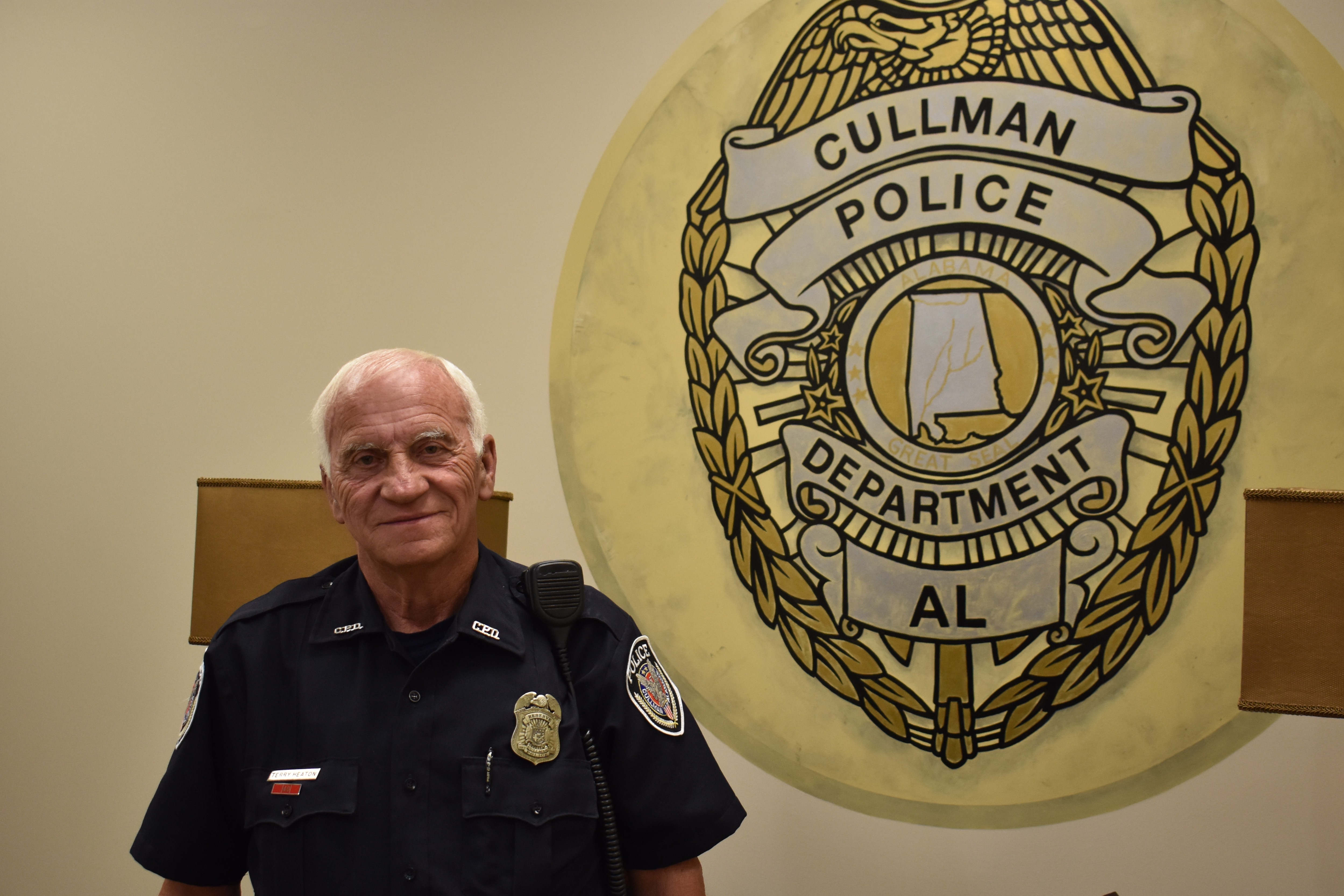 Cullman Police Officer Terry Heaton poses for a photo at the department last week. Heaton is the CPD’s only remaining Vietnam veteran. He also celebrated his 40th anniversary with the CPD earlier this year. (W.C. Mann for The Tribune)

When he graduated from Cullman High School in 1968, Heaton didn’t have a military career on his radar, but the government would take care of that for him.  In February 1969, he was drafted into the Army. After training at Ft. Benning in Georgia, he shipped out to Vietnam, where, from 1969 to 1970, he served with the 585th Transportation Company, a “medium truck cargo” 5-ton tractor trailer unit of the 39th Transportation Battalion stationed at the 101st Airborne’s Camp Eagle near the town of Phu Bai north of Da Nang.  From there, the unit picked up supplies at Da Nang and transported ammunition, gunpowder and equipment to support operations of the 101st Airborne in the A Shau Valley. It also occasionally ran convoys all the way north to the Demilitarized Zone (DMZ).

These weren’t just truckers in green.  Being one of the main lifelines for forward bases in an active combat zone, truck convoys were popular targets for Viet Cong and North Vietnamese Army ambushes.  Transportation personnel often had to fight their way into forward bases with the help of tanks, armored personnel carriers, airborne helicopter and fixed wing gunships.  Truck units usually even had to convert some their own vehicles into armed and armored “gun trucks.”

Heaton expressed mixed feelings about the war, but not about his service or those with whom he served.  He shared, “There’s a lot of things that could have been done better. Of course, the ones that were there, they done their job, and, unfortunately, there’s a lot of them that done their job and paid the ultimate price for it.  And those of us that was lucky enough to go and do what our country asked us to do, and come back in one piece, we was fortunate. It’s just a fact that it could have been done better, but you do what you’re told in the military.”

After completing his two years of service, Heaton left the Army and returned to Cullman.  Renting a house from a supply sergeant with Cullman’s Company C of the 167th Infantry Regiment, Heaton was quickly recruited into the Army National Guard while he studied refrigeration and air conditioning at Wallace State.  In addition to more education and other jobs, he stayed with the 167th until 1987, when he transferred to a Birmingham unit of the Army Reserve’s 75th Training Command. There, for the next 11 years, he worked to train other military personnel around the country, as well as Puerto Rico and the Virgin Islands.

At the end of 1998, Heaton retired from the Army with 30 years of service in active duty, Guard and Reserves.

In the 1970s, he completed his training in refrigeration and air conditioning and went to work in facilities maintenance, working in the field long enough to retire from Cullman Regional Medical Center with 30 years in that career, as well.

Call him restless, but dual careers in skilled maintenance and the Army still weren’t enough for Heaton; he returned to Wallace State in the late 1970s to study law enforcement.  While still enrolled in the program, he joined the Cullman Police Department as a reserve officer in January 1978, a month ahead of Chief Kenny Culpepper. Now, Heaton’s seen an entire generation of law enforcement pass in a growing Cullman community.

“It’s changed,” said Heaton.  “You’ve got more restrictions now than you used to have.  You know, the law has changed: some are for the good, some are for the best and some are not for the best.  We’ve got the laws and we’ve got to abide by them, but you’d like to see some of those restrictions on you enforcing some of these laws change.  You feel like sometimes your hands are tied.”

Patting his ballistic vest, Heaton commended the CPD for its upgrades in equipment over the years. And, as to the debate over police bodycams, he’s all for them.

Said Heaton with a smile, “It’s a good asset, because it’s proved us right and a lot of other people wrong.”

What do you most enjoy about living in Cullman today?

“I just enjoy the people.  Of course, I grew up here all my life.  You know most of the people. Of course, you don’t know all the people.  It seems like a close-knit little town. It’s growing, and it’s growing in a hurry.  But I just think Cullman’s a good place to live and raise a family; we’ve got good schools, good leaders and stuff like that.  It’s just an enjoyable place to live.”

As a lifelong resident, what do you think Cullman needs to rediscover about its past?

“When I was a kid, we found stuff to do to keep ourselves occupied.  Of course, now people say kids ain’t got nothing to do. We made things to do.  We occupied ourselves.

“Of course, at that time there was a lot of dirt streets in Cullman.  We used to have two movies in town: one of them was the Ritz, over there by Mary Carter.  And you find you six RC caps and go to the movie on a certain day of the week.

“And then during the summer when we was kids, you know, they had a person that worked–I don’t know if it was with parks and recreation or who it was–but anyway, somebody would come, and the kids had a place to go.  And they played games, and this person would sort of oversee them all day long: played games and ball, and different things.

“I think a lot of stuff needs to go back to the basics.  There’s things to do, if a kid around here wants to do it, and it don’t have to get them in trouble.  I mean, some things might be a little mischievous, but it wouldn’t hurt nobody! But we found games to play, and it was enjoyable.”

What would you say to a high school student considering a military career?

“I think it’s good for anybody.  I think it is, because it learns them discipline and responsibility.”

How about a law enforcement career?

After 40 years and retirement from two other jobs, what makes you want to continue as a police officer?

“I just enjoy it.  You deal with a lot of people, and you hope that in some ways you are bettering things in what you do.”

Heaton has no plans to retire from the CPD any time soon.  In addition to his shifts as a reserve officer, he maintains a horse farm near Spring Hill and even continues to do a little air conditioning work.

When the time does come for you to step away, what do you hope people will remember about your career as a Cullman Police officer?

“I guess, just basically for them to realize that I have done the best job to my knowledge, and hope I treated everybody fairly.”