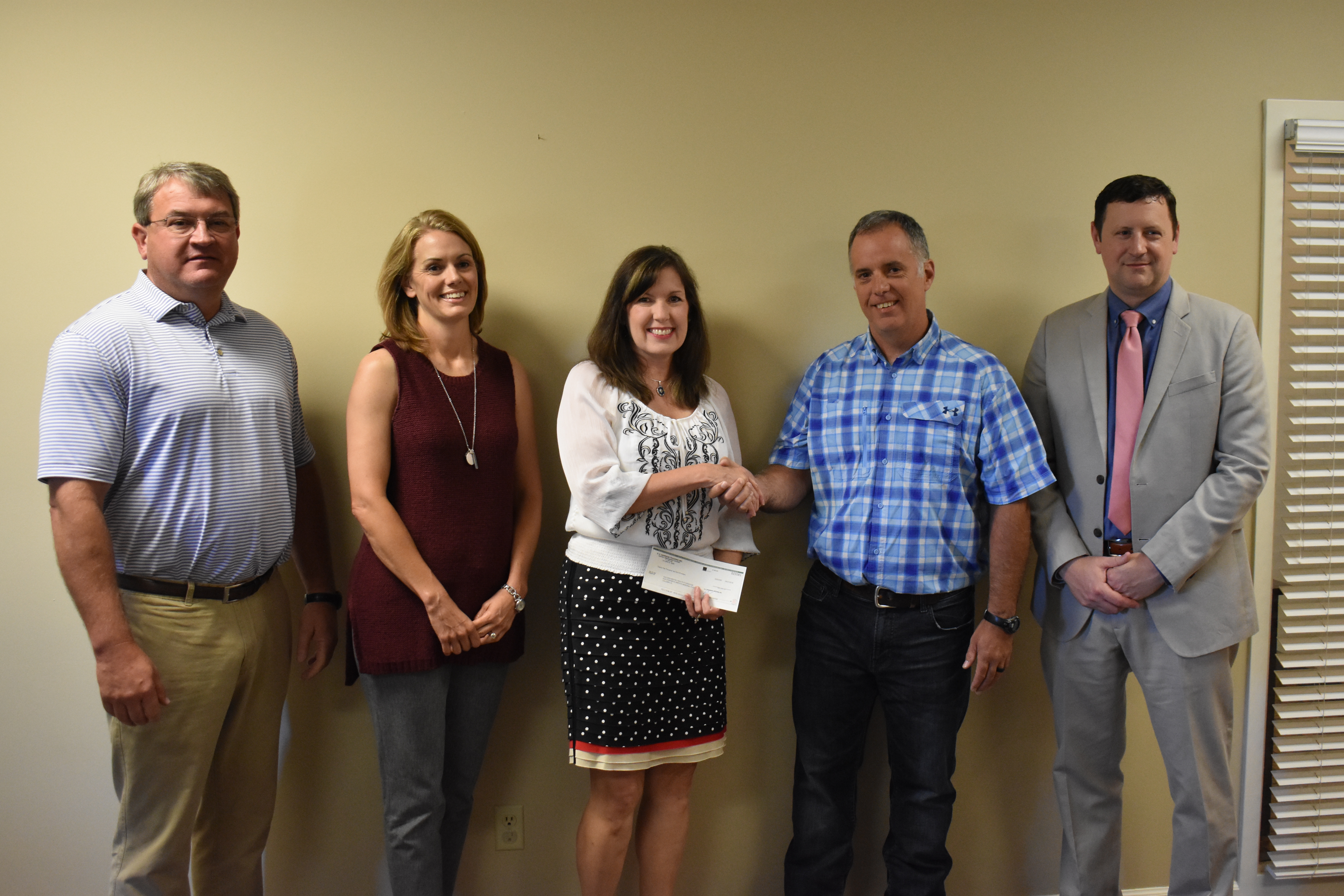 CULLMAN – On July 17, 2017, Cullman Attorney Stephen K. Griffith lost his life to a man suffering from severe mental illness.  On Wednesday, Griffith’s family honored his memory and lessened the chances of such a thing happening again by establishing a fund for the Cullman Area Mental Health Foundation to provide increased mental health care services to Cullman County.  R.E. Garrison Trucking Co., which is owned by members of the Griffith family, created the fund by presenting the Foundation a check for $25,000.

According to Cullman Area Mental Health Foundation Treasurer and WellStone Chief Operating Officer Chris Van Dyke, “The memorial fund is going to be used to expand mental health services in Cullman County in various ways.  We’re not even sure exactly all the ways it’ll be used, right now. Now, we’re focusing on creating it and building it up; we’re writing some guidelines and goals for it, right now. But it’ll be used to expand services, especially looking at the long-term goal of having more acute capacity, more crisis capacity, that sort of thing.  So we may create new positions, we may use the money to buy bed days at hospitals for people who have no other way to get to hospital, various things like that.”

In a press release earlier in the week, Van Dyke shared, “Steve Griffith was and still is incredibly respected by our community. His death was a tragedy that will not be forgotten. The Cullman Area Mental Health Foundation Board of Directors has the distinct privilege to help the Griffith family establish and grow a memorial fund in his honor. We deeply appreciate the Griffith family’s generosity and their vision to invest in preventative services for the Cullman community.”

Van Dyke continued, “WellStone and the Cullman Area Mental Health Foundation are leading a local coalition to plan for long term expansion of treatment availability, with the ultimate goal of providing local, 24/7 access to care for those facing mental health issues and acute crises.”

For years, proponents of mental health care have complained that state government cuts to mental health funding denied people with mental illness the services they desperately need, endangering both them and their communities.

“This is a subject that we’ve talked about many times. It’s a subject that makes me angry to talk about, and that’s mental illness. Through the investigation, our investigators have worked throughout the night, and are continuing to work. What we have identified (is) that in 1997, there was a case involving Mr. Walker, and for the last decade he believed that the victim had a part to play in a case that he was involved in. We’ve identified that Mr. Walker had mental issues. Mr. Walker became infatuated with Mr. Griffith, even though they had no connection. There was no connection between the two. And yesterday, that mental illness led Mr. Walker to Mr. Griffith’s residence, in which he took his life.  In Mr. Walker’s mental state, he believed there was a connection. There was not.”

The Foundation’s Neil Morrison addressed the Griffith family after the check presentation Wednesday.

“It just means so much, and I was sharing with Wiles (Griffith) the other day that–and I’m going to say–your dad enabled us to be able to do this, y’all, because there’s so many good people (who) have lost their lives in this community unnecessarily, and so many young people that are facing mental illness.  So I just want to tell you, on behalf of me and the rest of this group that have been meeting with me and Chris (Van Dyke) for months now, you’ll never know how much this means, because this will enable us to do things that we see that can hopefully help a crisis like this from ever occurring again,” he said.

“You hate to lose a loved one, but if you do, you hope that the loss will then turn into something positive.  And I can tell you that I would go out and borrow a hundred times that and give it back if we could bring him back, but we know it can’t.  So I appreciate what y’all are doing and have done, and I especially appreciate you coming forward in the public to allow us to–again, for lack of better terminology–use your dad as a way to do good things.  And so I just wanted you to know personally, on behalf of me individually–and I’ve talked to several other people that have been working on this committee–that we’re very grateful.”

Van Dyke told The Tribune, “We’re very thankful for the Griffith family starting this fund, and thankful that we’re having the opportunity to host it with the Foundation.  We’re very appreciative and think it’s a great thing and hope a lot of other people will donate, too.”

The Cullman Area Mental Health Foundation is a 501(c)(3) charitable organization.  All donations are tax-deductible, and the Foundation encourages giving to honor Griffith and to increase access to mental health services in Cullman County.

Donations can be made to: