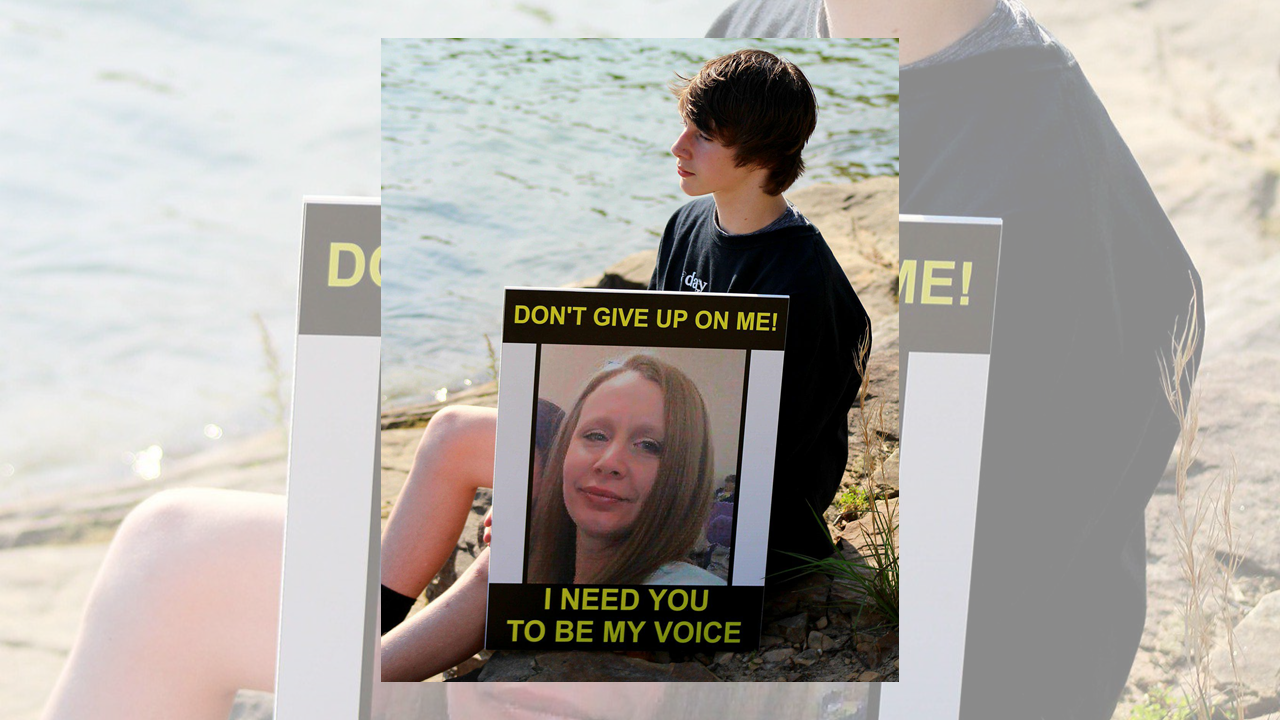 Jordan Wilson’s son, Dylan Sandefur, 13, poses with a photo of his mom this month at Smith Lake, where Wilson was raised. Wilson has been missing since May 15, 2016. She is the daughter of Judy (Johnston) Thomas and Wayne Johnston. (Photo credit: Crystal R. Mendoza)

CULLMAN COUNTY – Jordan Lee Wilson and her sister, Nicole Wright, were raised on Smith Lake. That’s why Wilson’s family chose the lake as the place to hold a small, private vigil for her this month. Today, May 15, 2018, marks two years since Wilson went missing. And though there is a $50,000 reward for information leading to her whereabouts, there has been no break in the case, according to Jordan’s mom Judy (Johnston) Thomas.

“We had another search in February,” shared Thomas. “This one was the typical search. We had about 30 people. We’re exhausted, mentally and physically. But we do need to keep her name out there. We know no more today than we did two years ago.”

At approximately 5’8” and 150-160 pounds, Wilson, who was 32 at the time she disappeared, has dark blonde hair and was last seen by friends and family on May 15, 2016 driving a newer, dark-colored Kia Sorento near the Walker County line in the Bremen and Bug Tussle area. Later discovered near Busby Road and Campbellville Lane in an area north of Sipsey and west of Arkadelphia, the SUV was abandoned approximately 7 miles from where Wilson was last seen by friends and family, and Wilson was nowhere to be found. Her cell phone was in the vehicle.

“The community has shown so much support,” said Thomas. “We have the billboard up on (Alabama Highway) 69, they put a banner up at Cold Springs School, at the ballfield, and we’ve seen around 300 decals on cars showing Jordan’s picture and the information about the reward.”

Wilson’s family is asking everyone in the community to pray for her, especially today, on the anniversary of her disappearance. An online event was created at www.facebook.com/events/444905145961781. On that page, Wilson’s family writes:

“Jordan's loved ones ask that on the 15th of May you join with them and friends and all who loved her in a day of prayer to bring her home and have the answers so needed. Please share this page on all social media and take a moment that day to light a candle and say a prayer for Jordan. Post your prayer, light a candle and share on this event page.

“Such a simple thing to do, and one that will help this family as they continue to search for their loved one. Pray for answers, courage, strength, hope and resolution. Pray by yourself or gather your family together or even your friends. Let’s completely cover Jordan and all who know and love her in prayer. Thank you all.

"’For where two or three are gathered together in my name, there am I in the midst of them.’ Matthew 18:20”

The past two years have been a struggle for Thomas. She shared, “I’m better today. There was a time I couldn’t have a conversation with anyone. I went into seclusion. I protected her two boys. It was disbelief. This is not happening. It’s just something you see on TV. I was in a vegetative state of mind until last fall. I had to come out of it. I forced myself out of it. Here I am, today, continuing to fight.”

Wilson’s aunt, Dawn Shoults, was the face of the family’s search until the beginning of this year, stepping in for Thomas.

“Jordan was 32 years old at the time she disappeared,” Thomas said. “My life stopped that day. It stopped. There’s very little recollection between then (before Wilson disappeared) and now.”

Wilson is not only a beloved daughter and niece. She is also a mother to two young boys.

“The little one (Caleb), we keep him pretty protected, we just tell him mama’s in heaven,” said Thomas. “May is a hard month. He’s still making Mother’s Day cards. It makes it difficult. He was 6 when Jordan disappeared. He’s 8 now. Dylan is 13. It’s taken a toll on him. He’s coming into manhood; he’s stayed in that protector mode, ‘I wanna fight for my mama.’”

Thomas shared that one of the worst parts is all of the phone calls the family receives. “There’s a $50,000 reward, but nothing has come forward. We get all kinds of crazy phone calls, and what I’ve learned since the beginning of this, and I’ve talked to other parents of missing children, or spouses, or whoever the family member may be, they get the same kind of phone calls that we get. They’re gruesome, gory stories. It’s all the same. And those were the stories that we were told, and there’s nothing that leads to any of this.”

“The sheriff’s office (CCSO), they’ve not dropped the ball on anything in any aspect; they have covered every base there is to cover, and there’s nothing. There’s not a drop of blood, anything,” said Thomas. “If we find Jordan, things will change. The search will continue.”

Cullman County Sheriff Matt Gentry said, “On behalf of the sheriff’s office, this case is very important to us. The family means a lot to the sheriff’s office and we went to ensure we’re doing everything we can to give them closure in this case. No matter what, we’re not going to stop, you know, we ‘re going to continue to work every day on this case, for the family. We’re continuing to work every lead we can get. I want the family to know they’re still on our heart and prayers. We’re going to continue to be vigilant on this case.”

“Sheriff Gentry, when he looks at me in my eyes, I know,” Thomas said through tears, “I know that he will never give up. You know, you just don’t find that anywhere. Because this is happening to us. It’s happening to other families across the country, families next door to us in other counties, and they do not get what we get out of Sheriff Gentry. I’m not putting him up there at the pearly gates with God and Jesus, but he’s real close.”

The CUE (Community United Efforts) Center for Missing Persons has been instrumental in the search for Jordan Wilson. The nonprofit has organized several searches in the area where her car was found, working its way outward and searching in grids, documenting each search and keeping records of exactly what areas have been searched.