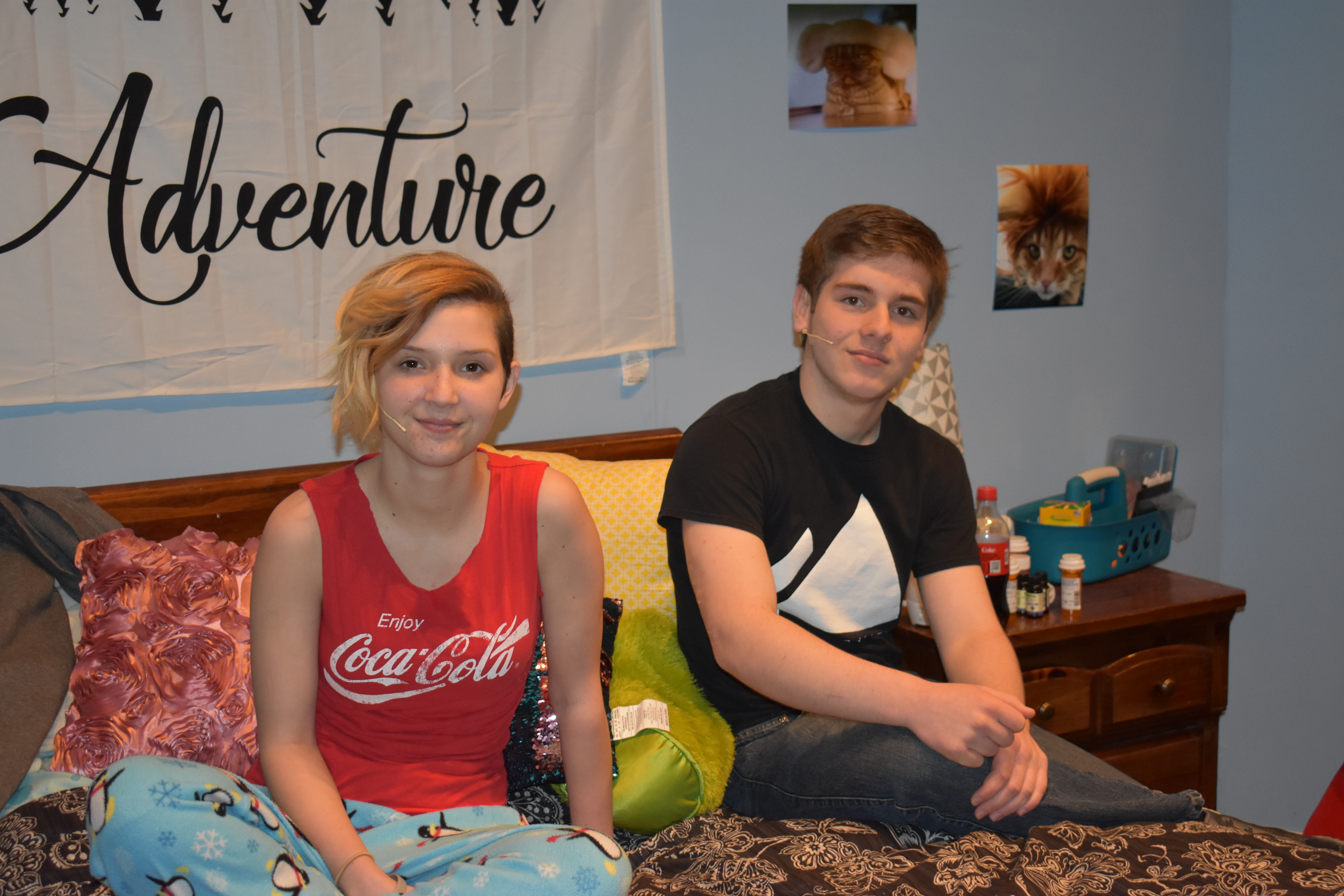 In a two-character play set in one room, Macie Burgin and Matthew Baughman shared the stage without a pause for more than an hour. (W.C. Mann for The Tribune)

FAIRVIEW – On Sunday afternoon, Fairview High School’s Fairview Theatre Works presented “I and You” at the high school auditorium. The play was a two-character drama set in the bedroom of chronically and dangerously ill Caroline, who is homebound while on a transplant waiting list, when she is visited by previously unknown classmate Anthony, who has been partnered with Caroline on a class project.  The two butt heads hard but begin to discover connections as they study readings from Walt Whitman’s “Leaves of Grass.”  Watching it, you might get the feeling that there’s something going on beyond the information you’re getting onstage, and you’d be right.  By the end, Caroline finds out why Anthony is really there, and just how connected they are.

Fairview Theatre Director Mark Dobbs told The Tribune, “Macie (Burgin), who plays Caroline, and Matthew (Baughman), who plays Anthony, have done a tremendous job learning a tremendous amount of lines.  The play’s an hour and 20 minutes; neither leave the stage the entire time. No one else has a line. They’ve done a great job.”

Dobbs took time to give lots of credit to his other theater students for their design of the set and behind-the-scenes efforts.

Before the curtain opened, Dobbs said, “One thing I’m really proud of is when I go to introduce it in just a second, when I get through talking, I won’t do anything else.  Everything is done completely by the students. There are no adults in the play, no adults running the play. It’s completely student-led.”

Dobbs also recognized Fairview agriscience teacher Justin Miller, who constructed the set, and he thanked Walker Brothers for its donation of many of the materials used in set construction.

A cast of two

After the performance, Burgin and Baughman talked about the challenges of an 80-90-minute play with only two characters.

“Definitely getting all your lines,” said Burgin, “and knowing how to cue each other; because there were some lines where we talked over each other.  So I had to perfectly time it every time I would say something over him, because my character is very mean, and talks over and takes control of everything.”

Said Baughman, “Another problem that a lot of actors, including me and Macie, face is, there’s a lot of things going on in your head when you get on the stage, and it makes it hard to think clearly.  What line do I need to say next? And when that takes over and one of us messes up a line, then we have to think, ‘How can we recover from this?’ because the main rule in acting is, it doesn’t matter if you mess up as long as you can recover.”

“I think really developing the characters and coming into them as your own,” said Burgin.  “Like my character Caroline: she’s similar to me, and how I can bring that into the play and make this my own, especially the set.  Most of the stuff came out of my room.”

Baughman added, “One of the greatest joys is like, when it’s all done and through, you get to look at the audience and you get to see every single person that paid to come and see you!”

Watch for the following productions coming up for Fairview Theatre Works: