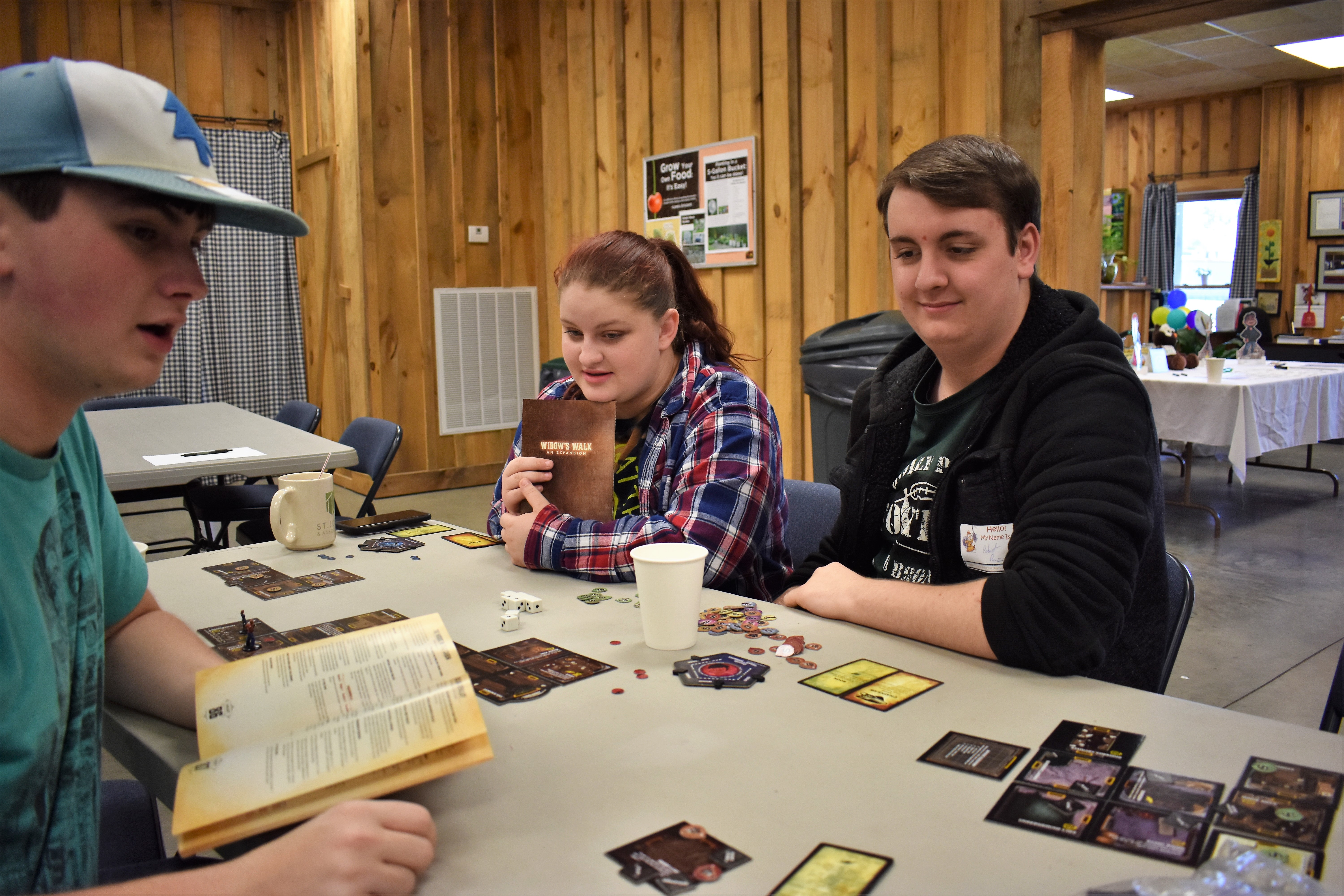 Local players try out one of the expansion games for “Betrayal at the House on the Hill” on International Tabletop Day at Cullman’s North Alabama Agriplex. (W.C. Mann for The Tribune)

CULLMAN – Gamers from around Cullman County and beyond gathered on Saturday at the North Alabama Agriplex to celebrate International Tabletop Day.  Families and friends played together, and total strangers got the opportunity to get acquainted around the table. Some brought their own games, and many picked from the huge selection of games available at the event.  Drawings gave away prizes, as did tournaments in the late afternoon and evening.

Siblings Boomer Barr and Leslie Sanders have hosted the event in Cullman for several years.

Barr shared with the Tribune: “International Tabletop Day was an event created by Wil Wheaton and Felicia Day, the people that started Geek and Sundry (an organization that describes itself as “the epicenter of gaming and lifestyle for pop culture fans with an independent spirit”), five years ago.  We started doing our International Tabletop Day four years ago, so this is our fourth year running.

“And basically, International Tabletop Day is designed so that people will get together and spend time with family and friends, playing board games.  Some people don’t always set aside time. A lot more people are getting introduced to board games, so that’s becoming a more prevalent thing.

“It also introduces people to new board games, because a lot of people, especially in America, when they look at board games, they think of Monopoly and Sorry, and Trouble, and all those Milton Bradley games that have never changed in all their life.  And this is introducing people to games: we have all sorts of games.”

The new generation of games is referred to as “tabletop” games, and they are not your grandparents’ board games.  Some games use traditional-style boards, while in other games players construct the board through the course of the game with cards.  There are also more pure card games, and role-playing games that create one-evening adventures based on fantasy games like Dungeons and Dragons.  There are action games and thinking games, and games geared toward various interests and almost all age groups.

If you’re interested in the new generation of games, Cullman has its own group led by Barr and Sanders that meets on Thursday evenings at 7 p.m. at the Old Depot at 309 First Ave. NE downtown.  On the fourth Thursday of each month, they move over to Valhalla Comics at 1108 Fourth St. SW (US Highway 278).